A Copper Eldorado a Kilometer Under (REPORTAGE) 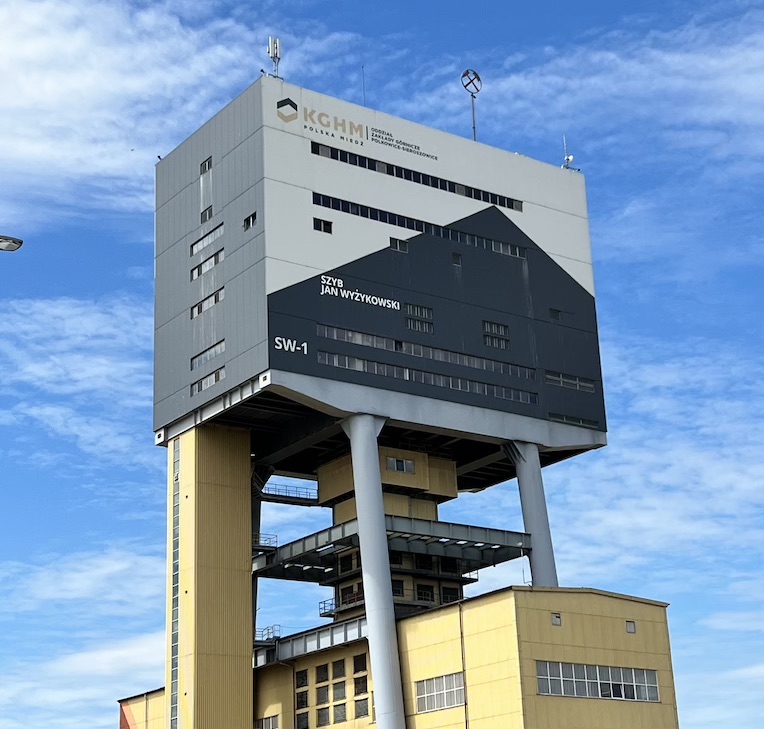 Poland is not a resource powerhouse like the oil giants of the Middle East, but it has an element that, unlike fossil fuels, still has a future. We went into the copper eldorado that sits a kilometer under ground – writes Mariusz Marszałkowski, editor at BiznesAlert.pl.

Copper is one of the most important raw materials of the modern economy. It is used in all its segments from energy, through the automotive industry, to information technology, telecommunications and construction. Copper is used as a conductor of electricity, in transformers, transistors and processors. Due to its plastic properties, it can be molded into various shapes, depending on the application. In addition, it is ideal in alloys with zinc and tin, which produce brass and bronze respectively. Both alloys are much harder than copper, but at the same time they retain its rich physical properties.
This raw material is also widely used in the process of energy transformation. It can be found in wind turbines and photovoltaic panels. Without extensive access to copper, the process of moving away from fossil fuels and towards renewables cannot be fully carried out.

The public often associates Poland with coal. The country does not have significant oil or natural gas resources. There is also no access to large iron deposits. However, it has a significant share in the world’s production processes due to its very vibrant, yet unknown to the general public, copper ore mining business.

KGHM was established in 1961 as Kombinat Górniczo-Hutniczy Miedzi (Mining and Smeltering Copper Company), but copper had been sought for and mined already after the war. Jan Wyżykowski, an engineer and mining geologist, took a big part in this process, and his research made it possible to discover valuable copper deposits in the area of the Fore-Sudetic Monocline. Initially, decision makers undermined the efforts, as they based their decisions on research made by German geologists who had conducted their surveys before World War 2. According to their results, the area didn’t have copper that was economically viable for mining. Thanks to Wyżykowski and his team, it was possible to discover deposits that to this day shape the economic and business landscape of not just Lower Silesia, but also KGHM’s position as one of the world’s leaders in mining this precious mineral.

According to a survey conducted by Kitco, a professional portal dedicated to investors, KGHM ranks seventh among the world’s biggest copper producers. In 2021, the company’s output totalled at 753 thousand tons of payable copper, out of which 577 thousand tons were produced in Poland.

However, KGHM is not only about copper. More than 16 percent of the company’s revenue comes from the production of silver. According to a rating prepared by Kitco Kombinat, KGHM was the largest producer of this noble metal in 2021. It extracted 1366 tons. Gold, molybdenum, palladium, platinum, lead and rhenium are also extracted from the ore mined in copper mines in addition to the main, sought-for raw materials such as copper and silver. These compounds are a profitable by-product of the primary mining activity. KGHM Polska Miedź, the “national” part of the copper giant, operates at three mines – Lubin, Rudna and Polkowice-Sieroszowice. The copper ore deposits mined by KGHM in Poland are monoclinic at depths ranging from several hundred to up to 1500 m. The company’s mining operations are deep in nature, which means that the extraction process is more complex than in the case of open pit mines.

The author of the text was invited to pay a working visit to ZG Polkowice-Sieroszowice to see firsthand what the ore mining process looks like, and what conditions prevail at the very bottom. The visit took place in the shaft SW-1 “Jan Wyżykowski”.

A visit to the facility begins with a mandatory sobriety test. Only a sober worker can enter the mine grounds. This is, of course, due to security. The second step is the presentation of the occupational health and safety rules at the plant, as well as training in the use of escape devices. Escape devices are a must for anyone who goes underground. These devices, very simple in operation, give a person a chance to survive in the event of a sudden cut-off or reduction of oxygen in the air. The risks underground include a mine collapse and the escape route being blocked, as well as fires, which cause thick and toxic smoke. When access to oxygen is cut off, the escape device allows breathing for several minutes depending on whether one is moving or staying put. In principle, this device makes it possible to escape from the danger zone and find a safe place where one can wait for the arrival of rescuers. Fortunately and interestingly, copper mines are not at risk of a methane explosion.

When going underground, one should wear a special suit and a helmet, boots, gloves and a flashlight. This last bit of equipment is especially important, because access to artificial light is not available everywhere underground. The flashlight also has a tracking device, which in case of an emergency makes it possible for the rescue team to find any lost miners.

To descend underground one needs to use a three-tier lift. In total, during a single descent, up to 150 people can go down. It takes less than a minute to go to a depth of almost 1,000 meters, as the elevator crane allows it to move at a speed of 12 meters per second. Miners go underground in several tours as of 8 a.m.

Down there the conditions are demanding. The temperature reaches more than 40 degrees Celsius, which, combined with high humidity, makes the place especially stuffy and hot. Underground people and equipment are transported on specially adapted passenger cars, which are manufactured in accordance with the guidelines presented by the contracting authority. These vehicles move through hollow tunnels, the length of which, figuratively, corresponds to the distance between Lisbon and Moscow. The surrounding mines are connected to each other. Therefore, in theory, when one enters the Polkowice-Sieroszowice mine, they could surface at the Rudna or Lubin mine.

Air is pushed underground via special shafts, as well as transport shafts. Along the mine corridors, air is transported by means of special bulkheads, and then by working air vents, which are spaced at appropriate distances from each other. Starting from the shaft itself, the corridors are quite spacious. The tighter they are, the further the journey goes into the mine. In the copper part, the ceiling does not exceed 2.5 meters in height. That’s where the temperature and pollination are highest.

The miners’ activities underground include:

First, the drilling of blast holes and the arming of explosives to expand the tunnels. Before the holes are created, calculations need to be made. After that a rock bolt is built. Special bolting machines drill steel rods into the ceiling so that the corridor does not collapse. After the ceiling is secured, machines that remove the output from the mining face and the excavation enter the scene. These works are carried out by specialized backhoe loaders, which are specially adapted for mining conditions. These machines are up to 1.7 meters high to be able to move in the narrow spaces of the mine. After the output is loaded to transport vehicles, which can carry in a single drive about 15 tons of cargo, it goes to the so-called truss. There, the cargo is dropped onto a conveyor belt running under the truss. Larger pieces of the output are crushed into smaller ones, so that they can fit into the “openings” of the truss. After being crushed, the output ends up on a conveyor belt where it is transported to the mine’s transport shaft. Then it goes to the surface, to the Ore Enrichment Plant, where the copper is concentrated to a level of over 20 percent.

It is worth stressing that KGHM extracts over 30 million tons of output each year at its Polish mines. Out of that, copper only constitutes about 1.5 percent. In case of the Polkowice-Sieroszowice mine, rock salt deposits are located about 850 meters deep, above the copper deposits. The salt is also extracted, and later used for industrial purposes, for instance in the winter to defrost roads. The process of extracting copper is complex and requires a lot of sacrifice from the people who work in difficult conditions hundreds of meters below the surface of the earth.

The inner workings of a hub in a country that supplies a third of the world in copper
Energy
Chile is responsible for the production of 30 percent of the world’s copper. This would not be possible if it were not for customers around the […]
More

Copper and lithium are the future of the energy industry. Poles are in the global game
Energy
Renewable energy sources and e-mobility do not generate emissions, but they need raw materials that more often than not require forceful […]
More