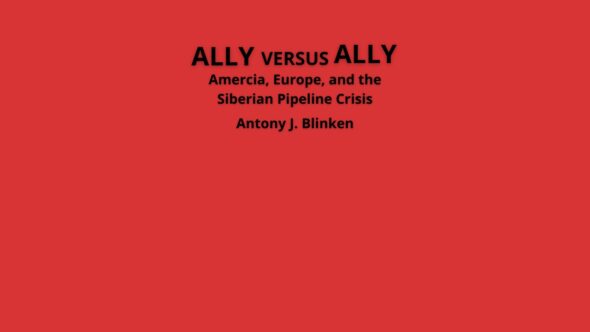 The new U.S. Secretary of State Anthony Blinken wrote a book on the disputes between America and Europe caused by the Old Continent’s reliance on gas from Russia. The publication was released in 1987, but Blinken’s warning still holds, considering the alleged deal that may lead to lifting the sanctions against Nord Stream 2 – writes Wojciech Jakóbik, editor in chief at BiznesAlert.pl.

The book reemerged thanks to Nils Schmidt, a German social democrat and defender of Nord Stream 2, who argued in Der Spiegel that Germany should strike a deal with America to withdraw the sanctions imposed on the project. Nils maintains that the conclusion of the Secretary’s book is that NATO should not be used as a tool of economic policy for introducing trade blockades. According to the politician, today this approach is symbolized by the unilateral sanctions imposed by the U.S. against Nord Stream 2. In his opinion, instead of achieving their goals, Americans are only driving a wedge between the transatlantic partners.

However, the fact is that Blinken wrote that such a view is held only in some European capitals, and that it is juxtaposed by the position held in other, e.g. Warsaw or Vilnius, which believe Western Europe is ensnared in relations with Russia, which limits its ability to react to the Kremlin’s aggressive doings. A very good example of this is the visit to Moscow of the High Representative of the European Union for Foreign Affairs and Security Policy Josep Borell, which is planned for the 4th of February, despite the brutal crackdown on the democratic protests in Russia. The European Union, which has assumed a very moderate approach to similar events in Belarus is unable to make even a symbolic gesture and call off Borell’s visit, because it is under the influence of the more powerful European states, whose policy towards Russia is lenient, because of their dependence on Moscow visible in the Nord Stream 2 dispute, which Blinken wrote about back in 1987.

Even though in the United States voices calling for a deal with Germany at the cost of U.S. sanctions are becoming more vocal, which is visible for instance in the pieces written by former U.S. diplomats for the Atlantic Council think tank, Biden’s administration is not suggesting it is ready to abandon the restrictions. The U.S. embassy in Germany has admitted that Americans were always ready to talk with Germans about their concerns over Nord Stream 2, but at the same time they were happy about the growing criticism of the project in Europe.

The German press agency DPA informed that the spokesperson of the U.S. embassy in Germany commented on Handelsblatt’s reporting on the possible talks about the sanctions imposed on the contentious Nord Stream 2. According to the newspaper, Americans are ready to lift the sanctions in return for concessions. “We are happy about the growing number of voices in Germany and among our other partners in Europe that are calling on suspending the project that is supported by the Kremlin,” the U.S. embassy said. “We have been loud and clear about our opposition to Nord Stream 2 due to our concerns about energy security and Russia’s threatening actions,” the spokesperson stated and added that the U.S. was always ready to talk to Germany about this topic.
The change of emphasis in American policy presented by the supporters of Nord Stream 2, such as Nils Schmidt, as an opportunity to reach an agreement over the heads of CEE capitals, may turn out to be a double-edged sword. The security advisor to the U.S. president talked to the heads of Poland’s National Security Bureau and the chancellery of the Polish President. During the conversation the advisor talked, among others, about respect for democratic values and the rule of law. These values are an important part of the U.S.policy, which means America may criticize the Klimaschutz Stiftung foundation was allegedly established to protect the climate, but in reality was set up to avoid American sanctions against Nord Stream 2. According to Transparency Germany, the organization is a form of misuse of the law and a threat to the credibility of any honest association of this type.

The U.S. sanctions against Nord Stream 2 have so far frozen the project, and its construction has not been resumed before the release of this article. Allegedly Americans expect that any deal on the pipeline, which at this point has not been made, should protect the interests of Ukraine and Central and Eastern Europe. This means that whatever the deal will be, it will have to satisfy states such as Poland. If Americans do really want this and want to include a kind of a “turn off button” for Nord Stream 2, that move will create a lot of room to work on the EU gas directive, which should be imposed on the gas pipeline. The EU regulation excludes the possibility of Gazprom becoming a monopoly, so it may mean Russian regulations will have to be adapted to this law, which would delay the project’s go-live by additional months or years.

A scenario in which Nord Stream 2 is completed after the Polish Baltic Pipe, which will become an alternative source of gas by 2022, is becoming more real irregardless of the talks between Americans and Germans, and of whether Handelsblatt’s scoop is indeed true. The deal on Nord Stream 2 promoted by Western Europe, which is ensnared in relations with Russia, would be a throwback to the problem described by Blinken in 1987.