A truly small atom with a huge potential 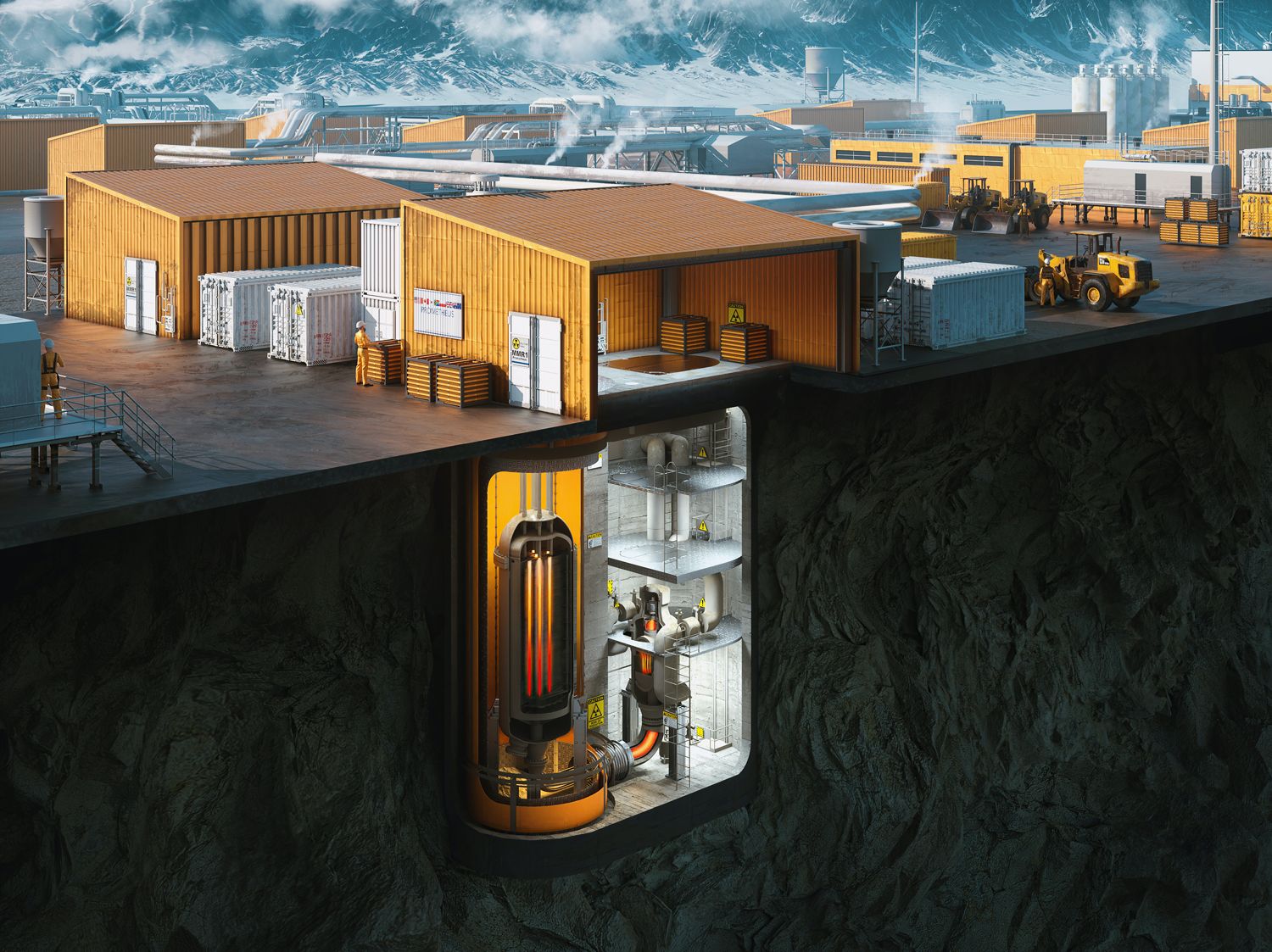 Micro modular nuclear reactors are really small, because they fit on a regular truck. If this technology comes into use, it will open new doors for distributed and zero-emission energy, the industry needs so much – writes Wojciech Jakóbik, editor-in-chief at BiznesAlert.pl.

From the Earth to the stars

Nuclear micro reactors are already used by the military around the world. Their capacity reaches several MW and they power, for instance, nuclear submarines. This technology can also develop in the civilian sector thanks to companies like Ultra Safe Nuclear Corporation from the USA, which wants to build micro reactors around the world. It was established over a decade ago. It employs over 300 people and is based in Seattle, USA. It is present in, among others, South Africa, South Korea and Poland. The technology was developed by Francesco Venneri, an Italian living in the US who has been part of the nuclear sector for years. He was the founder of USNC, which may change the future of the nuclear energy sector, and one day reach for the stars, because the fuel used by this technology may propel rockets or research stations beyond Earth. Younger readers may associate such solutions with the popular game series Fallout.

“I originally worked on new methods to isolate and store nuclear waste. After the Fukushima disaster, I started isolating nuclear fuel with ceramic pods. That’s when the UNSC was created to develop this technology to make it commercially available,” Venneri said during a presentation in Lappeenranta, Finland. The fuel technology called TRISO may reach for the stars. One of USNC’s departments works on space technology and its motto says “safety matters”. “A small reactor built as part of the Pylon project with cooling with the help of a radiator. Such a reactor can be used in the armed forces, because it can be transported on the ground in small containers,” said Francesco Venneri in an interview with BiznesAlert.pl. Another solution is a nuclear space rocket powered by the Nuclear Thermopropulsion System (NTP). The gas is heated to a temperature that creates a jet and propels the rocket. Such a system would be attached to the rocket in space from high orbit, after burning fuel in a matter of minutes, potentially allowing, for example, to carry out a mission to Mars. Another portion of the fuel would make a return possible, which means NTP has the potential to facilitate the development of interplanetary transport. USNC is working with the National Aeronautics and Space Administration (NASA) and the US Department of Defense Advanced Research Projects Agency (DARPA) to develop this technology.

Ford T among the reactors

The military history of this technology is evident. It involves placing the reactor underground with little maintenance staff, so that it neither stings the eyes of environmentalists nor attracts the attention of terrorits. One could imagine that such an installation could be placed under one of many units in a given facility to conceal its true location. Besides, the building is supposed to be small, and the reactor itself buried underground. It can help achieve military goals, but it will also have little impact on the landscape, which is important in the face of the increasingly widespread phenomenon of “not in my backyard”, which is a source of protests against the construction of infrastructure of all kinds. The shape of the containment of conventional reactors is the source of the biggest concerns, but in case of USNC’s technology and other small facilities of this type the problem disappears from sight. One can imagine that in the future, such solutions would be used to power autonomous systems in remote areas of the taiga or facilities in space. Perhaps one day this technology will power underground cities that are attractive from the point of military, civilian or even business needs.

Micro reactors need only a small crew, and a lot of automation, which means low construction and maintenance cost, and less risk of errors. A hundred people and a year of work are needed to construct one facility. The reactor arrives ready to the construction site, after being assembled in isolated conditions at a designated factory. It doesn’t need to be welded on site, which lowers the risk of errors and delays. The goal is to crank out the reactors on an assembly line, so that they become the new Ford T of nuclear technology. This also pertains to their capacity that is to reach several MW per unit, which makes them a passenger car in comparison to the vans of atomic power – i.e. small modular reactors, which are several meters high and are “small” only by name, or large reactors, which are the 18-wheelers of nuclear power. Thanks to being really small, the MMRs offered by USNC have the potential to be used in the industry, which thanks to this technology could acquire access to stable, zero-emission energy without being connected to the National Power System, which eliminates distribution fees and other complications. From this point of view, MMRs can be compared to PVs or wind farms connected to factories through a direct line, which is the subject of a lively discussion in Poland.
The micro reactor of the Italian innovator from the USA is also supposed to be more safe. Cooling in the USNC solution is provided by helium, which is known from the fourth generation reactors. It reduces the risk of failure by lowering the risk of the core melting down (as in Chernobyl or Fukushima). In addition, if the temperature increase is too high, the chain reaction is automatically extinguished, which means the reactor shuts down, so the risk of fuel damage is even lower. The reactor itself is housed in a concrete bunker underground to minimize the threat in the worst-case scenario. The fuel to be used in USNC’S MMR is TRISO, a radioactive material bound in silicon carbide capsules that isolate it from the external environment. The fuel coating is ceramic and is created in a 3D printer. The fuel itself is enclosed in capsules. It resembles poppy seeds (they are a millimeter in diameter) trapped in a frozen liquid. 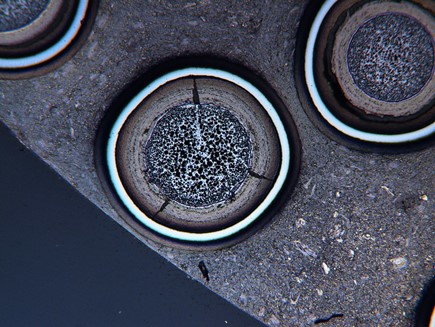 It gives heat, but does not allow the release of radioactive elements. It is also compact and makes the process of changing fuel easier. It should be replaced about every 20 years, but this also depends on usage, because MMR’s another interesting innovation is storing energy in molten salt, which lowers nuclear fuel consumption and makes the reactor more flexible, which makes it more compatible with renewables than conventional units. Excess energy can be stored in the salt and used when power supply from renewables drops. It also makes it possible to lower the capacity of the reactor, which does not have to operate in a specific range, but is capable of temporarily lowering supply. Up to 1,000 people can work at the TRISO fuel plant alone. The first USNC plants already exists in Oak Ridge, USA, which may bring to mind the Manhattan Project. The reactor is to be built in Ontario, Canada, and the company is in talks with the University of Illinois on cooperating on the construction. USNC initially wants to export the fuel, but if it develops projects of this type in Europe, it intends to build factories of this type in the area. The USNC’s fuel production capacity is expected to grow enough to supply 10 reactors per year. The company expects to start cooperation on nuclear fuel production with one of the biggest players on the market, but is keeping the name under wraps.

The promising MMR technology may reach the market in the 2020s, that is, before the first reactor in Poland is built, in 2033. However, this is not a competition to large NPPs, but a different class of solution depicted by the Ford T metaphor. The promoters of this technology want a reliable confirmation of its effectiveness. USNC has signed a letter of intent with the Finnish Lappeenranta University of Technology (LUT) to assess the potential of a nuclear micro reactor in the area of the Finnish campus. The LUT in Lappeenranta gets heating from a local biomass-fired thermal power plant that comes from the area’s timber industry, which is popular throughout eastern Finland. Drying wood for this process requires steam at a high temperature. The University presented its strategy until 2030, which envisages the development of technologies for a business related to the energy transition, the fight against emissions and nuclear energy. One third of the first-year students come from outside Finland, so the campus has signs and directions in English. Due to the weakening demographic growth, the LUT wants to attract as many foreign students as posible. It is the ninth best university in the world in terms of climate policy studies. It has faculties devoted to energy systems and scientific engineering and a separate laboratory for nuclear engineering. This laboratory is working with the Olkiluoto 3 project to solve the problems that delayed the construction of the reactor by 12 years. The representatives of the LUT sit on the bodies dedicated to the safety of the operation of the nuclear power plant. Finland is known for having the most stringent reactor security standards, which are overseen by the Radiation and Nuclear Safety Authority (STUK), the counterpart of the National Atomic Energy Agency in Poland, known for its high standards. The Authority’s strict expectations may have been one of the reasons behind the Olkiluoto delays. Olkiluoto 3 was supposed to be up and running twelve years ago. Recently, problems with the turbine delayed the launch until February 2023. The project is valued at around 10 billion euros. Meanwhile, the USNC solution may cost several hundred million euros per reactor.

The small atom invented by an Italian scientist from the United States can also conquer Poland, if there is enough interest. Promoters of this solution point out that the nuclear law could require appropriate changes, so that micro reactors can be built near industrial sites, and therefore a few dozen meters from a factory, and not a few dozen kilometers from the nearest buildings. Nuclear energy regulations in Poland were created decades ago and some provisions may not fit with the technological progress. This may be the case for a peculiar distance rule, similar to the 10H regulation from the Polish landscape law, which at this point is blocking the development of onshore wind.

“Polish legislation is technologically neutral and in order to obtain the appropriate permits for construction, it is enough to have a safe and complete reactor design,” argues Maciej Lipka, head of the Reactor Research and Analysis Department at the National Centre for Nuclear Research. “The latter, however, as history shows, is a challenge: the Western world abandoned the development of high-temperature gas-cooled reactors in the 1980s after several projects failed. China, on the other hand, needed more than a quarter of a century to move from purchasing a largely complete project to a working, just launched prototype HTR-PM,” he explained.

“It is also difficult to predict if Polish companies that use high-temperature heat would be interested in such facilities, if they could be built, considering it’s impossible to estimate the construction costs,” Maciej Lipka pointed out.

If the first step taken by USNC is successful in Finland, which has the tightest regulatory corset in the world, it will also cope in other parts of the world, perhaps reaching Poland as well. To be continued.