– We read in our portal that Ukraine will have to return to gas imports from Russia. This means a potentially smaller market for PGNiG until the end of the current agreement between the Ukrainians and Gazprom. It may also be important for Baltic Pipe – writes Wojciech Jakóbik, editor-in-chief of BiznesAlert.pl.

Russian gas will return to the Dnieper country, but under better conditions

The Court of Arbitration in Stockholm has ruled that the Gazprom’s claims for gas are justified relating to the obligation to purchase gas by the Ukrainian Naftogaz under a take or pay clause contained in the 2009 contract, which is to remain in force until the end of 2019. The Court concluded that Ukrainians have to buy 5 billion cubic metres a year. The management of Naftogaz considered this result to be positive, as arbitration also allowed them to win prices “below the European level.”

This means that until the end of the contract, it will be more difficult for Poles to develop sales of natural gas to Ukraine, which in 2018, according to PGNiG’s hopes, was to even double from one billion cubic metres recorded in 2017. The terms of the current contract will not affect the Baltic Pipe project, which is to be ready in October 2022. However, we should take into account the possibility that Gazprom will maintain favourable conditions for Ukrainians in order not to lose their market, and then its gas, together with the one coming from domestic production on the Dnieper River, may become a competition for supplies from Norway via Poland. Such suggestions appeared already during the Polish-Ukrainian gas supply panel of the Energy Forum in Wrocław, where the Ukrainian side declared its readiness to become an exporter of gas by 2020. 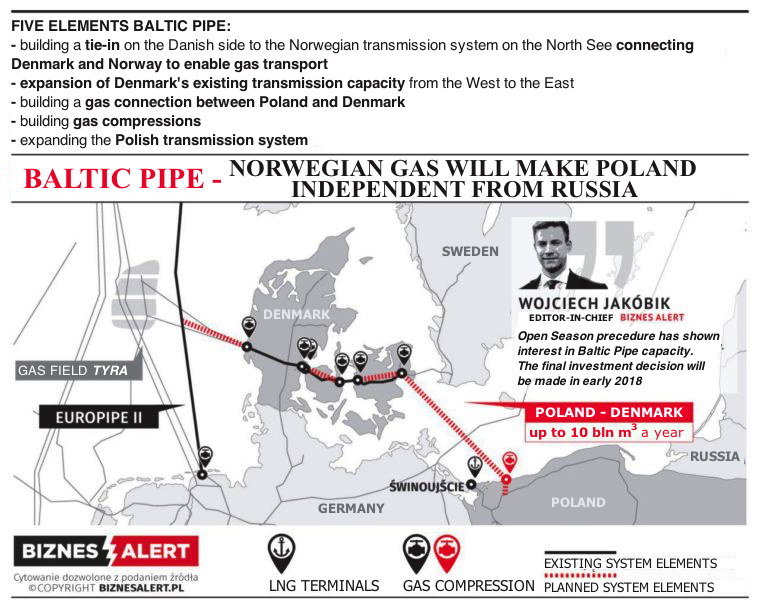 The outcome of the second dispute before the Stockholm Arbitration Tribunal, in which Naftogaz and Gazprom argue about a transit agreement, will be crucial for the final settlement. If the result is in favour of the Russians, they may be able to give up supplies via Ukraine after 2019, when the contract for transit via Ukraine ends. Then somebody, probably European companies, will have to push gas into Ukrainian warehouses in order to maintain the pressure necessary to stabilise the Ukrainian network. Investments in the transmission grid may also be needed. This will force the Ukrainian side to a concession for the West, or to escape into Russia’s arms.

If Ukrainians win, the supply of Russian gas via Ukraine may remain at a certain, lower level. If it guarantees the stability of gas pipelines, it will be possible to modernize them in peace and quiet, which may encourage western capital to invest. French ENGIE and Italian SNAM are already interested in this. Also PGNiG signed an agreement for the use of Ukrtransgaz, a subsidiary of Naftogaz.

The problem with the reform

The attractiveness of the Ukrainian gas market continues to slow down reforms. Naftogaz has informed that it does not intend to hand over control of the storage facilities of the special company Magistralne Gazovody of Ukraine, which was set up to complete the ownership unbundling process in accordance with the EU law, which Ukrainians are implementing as part of the Energy Community’s commitments. Naftogaz argues that MGU is not interested in maintaining the gas transmission network (GTS).

Transferring “toxic” assets there could lead to their disposal and “catastrophic consequences” for Ukraine. Whereas subsidised Naftogaz will maintain the infrastructure even at a loss. However, it is not clear whether it will be able to mobilise funds for modernisation if it does not reform the gas sector in line with the will of the lenders from the European Commission, the International Monetary Fund and the European Bank for Reconstruction and Development. Volodymyr Groysman, Ukrainian Prime Minister, also ruled out the possibility of releasing gas prices for households in compliance with the requirements of the Energy Community. This means that he does not intend to pursue gas reform and is choosing a solitary path.

Perhaps the Ukrainians will be able to finance modernisation alone if they win in Stockholm, and expand their exports and earn enough to modernise the GTS. However, this is a risky game if we take into account the continuing occupation of the Crimea and military action in the east of the country. One spark in the East may cause a lonely gas reform to collapse. This prospect will not tempt western investors. A lone Kyiv game increases the risk.

PISM: Gazprom is playing for Nord Stream 2 in Ukraine
Energy
After an unfavourable verdict from a Stockholm arbitration court in its dispute with Naftogaz, Gazprom has unilaterally refused to deliver gas to […]
More

In Ukraine, Gazprom is losing clients and Russia is losing hearts that Poland can win
Energy
The hybrid gas war I wrote about continues. Gazprom has already lost its clients in Ukraine, and its activities consolidate the society around the […]
More

Polish Eastern gas policy depends on the outcome in Ukraine
Energy
On Friday, December 22nd, Ukrainian Naftogaz announced a victory in an arbitration dispute with Russian Gazprom. The Russians proclaimed the same […]
More