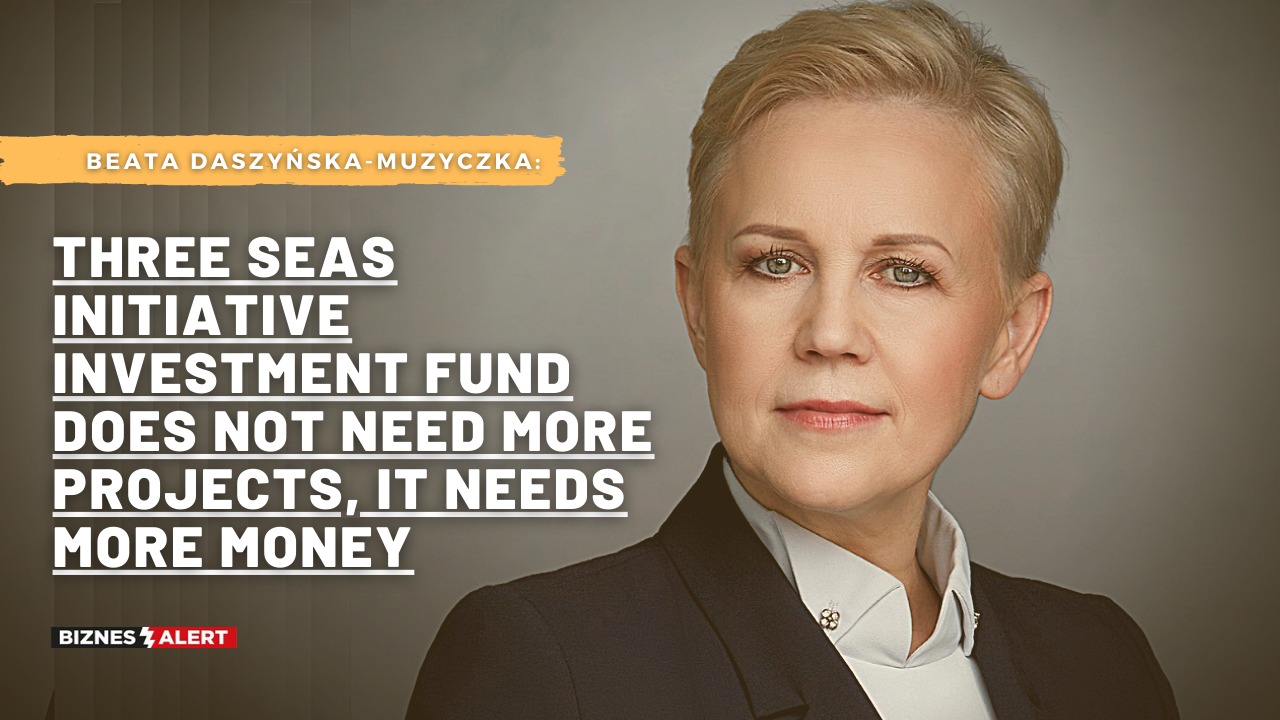 Today the number of projects is not giving me a headache, because we have plenty on the table, but I am concerned about something else. I have to fight for investors and show why the Three Seas region is interesting and worth investing in –  Beata Daszyńska-Muzyczka Chairperson of the Supervisory Board of the Three Seas Initiative Fund and President of Bank Gospodarstwa Krajowego says in an interview with BiznesAlert.pl.

BiznesAlert.pl: At what stage is the Three Seas Initiative (TSI) and what role does Bank Gospodarstwa Krajowego (BGK) play in it?

The initiative is based on actions taken at the presidential level to foster economic growth between the Adriatic, Baltic and Black seas. Inspired by this movement, BGK (Poland’s state development bank- ed.) established the Three Seas Initiative Investment Fund. Nine states have already affiliated with the Fund, and our tenth member is currently in the process of joining. The members continue to participate in meetings despite the coronavirus pandemic. The investors have declared they were ready to add about a billion euro to the Fund. We invest in projects from three sectors: energy, transport and digital infrastructure. Our first two investments will pertain to the transport and digital sectors. The following ones may relate to the energy sector, which is especially important for the region’s energy security and independence.

How does the Three Seas Initiative Fund work with EU funds?

It’s about managing money in an intelligent way. It has been raised that the TSI Fund is redundant, because of the existence of the EU funds. The Fund works on the basis of market rules, but it does not mean it cannot join initiatives funded by taxpayer money. During the TSI summit in Tallinn, I said that the member states can jointly make decisions about smart and important endeavors on the north-south axis by combining public, EU and TSI funding. That’s when the TSI fund will complement the other two sources of funding on the basis of market rules. Our region is competent enough to wisely use the money. Let me give you an example to show how this can work. Let’s assume that a state is building a section of a highway for public and EU money, but it needs to pay for an expensive road viaduct. The TSI may bankroll the construction of the viaduct, provided the financial model includes a provision that the usage of the overpass will come with a 15-year remuneration period.  Such individual contributions are sometimes necessary in large infrastructural investments, and we are capable of providing that. In the future these partnerships will make it possible for us to quickly and efficiently drive from Tallinn to Sofia.

Are there any examples in the energy sector?

Small-scale power generation is a good illustration. Many hydroelectric power plants in Poland are now at the end of the 15-year period of receiving subsidies that kept them profitable. This may impact the stability of the power sector, water retention in Poland, as well as environmental protection. In total we have about 800 small hydroelectric power plants with a capacity below 1 MW. Before World War II we had over 8000 hydroelectric power plants by the rivers in Poland’s current borders. We are building wind farms, we are looking for ways to build nuclear plants by 2033, and increasing the potential of hydroelectric power plants may aid these efforts. BGK will soon announce a strategy, which will take into consideration sustainable development in the wide context of improving the quality of life of the entire society, and offer smart management of power and other resources. Investors will follow the money. We are capable of setting action and investment trends in a new, more sustainable way.

Who are the investors that cooperate with the TSI Fund?

At the presidential level the TSI has 12 member states. Since the beginning the U.S.A. and Germany have been the Initiative’s partners. The talks about the TSI Fund itself took place among 11 states, without Austria. Slovakia is the most reluctant member, as it is the last state that is putting off its decision to join. The Czechs are now undergoing a legal procedure that will let them join the Fund soon. The TSI Fund has three types of investors. The main ones are development banks of the TSI member states, such as Bank Gospodarstwa Krajowego, which is the biggest investor that contributed 95 percent of the current capital, which amounts to EUR 750 million. Our goal is for the Fund to have EUR 3-5 billion. This poses a challenge from the point of view of managing investment funds. The second group are multilateral financial institutions, such as the EIB, EBRD and the World Bank’s IFC. We are talking to these institutions on the various ways they can engage in the Fund’s projects. The third type are private investors that want a return on the invested capital. We are aiming at retirement and insurance funds. Our investment adviser is Amber Infrastructure and it is looking for such investors. BGK is also using the TSI Fund to promote the region and the investment opportunities it offers through talks in Australia, Japan, South Korea, Canada, the U.S. and the U.K.

Will Americans engage in the TSI Fund?

We are talking with the U.S. International Development Finance Corporation, which has expressed initial interest in engaging with the TSI Fund. We are talking about the size and form of this engagement. No private investor can contribute more than the biggest investor from the main sponsor group of the TSI, which at this point would be more than the EUR 750 million from the BGK. As the main investors we want to have control over the investments and decide how to meet the needs of our states, which are estimated at EUR 600 bn. We are still waiting for the final offer from the U.S.

How many projects have applied for funding from the TSI Fund?

Our investment advisor Amber has now 90 projects in the pipeline. After initial analyses about 30 of them were rejected, as they did not qualify for funding on market-based rules. We are still looking into the remaining 60. Two have been already implemented. The remaining ones are in progress. Today the number of projects is not giving me a headache, because we  have plenty on the table, but I am concerned about something else. I have to fight for investors and show why the Three Seas region is interesting and worth investing in. Even if we manage to gather the assumed EUR 5 bn, we will only implement 20 or a few more projects. We are hoping for more. We need to show the potential of our region to get enough money to implement all of the projects. We want to develop trade between our countries. If our region does not flourish, the European Union won’t develop successfully either.

Will the valley of energy storages be created in Poland?
Infrastructure / Innovations
Is the competition between battery manufacturers and the solutions that scientists work on, going to affect the shape of not only the automotive […]
More

Three Seas Initiative is not against integration, it is for it (coverage)
Energy Infrastructure / Innovations
During the Atlantic Council PISM Global Forum 2017 in Warsaw the President of Croatia announced that the 3Seas countries would ask the European […]
More

Will the capacity market do its job?
Energy Infrastructure / Innovations
“The decreasing  time of capacity utilization of baseload plants and lack of economic incentives to build new generation capacities, show […]
More