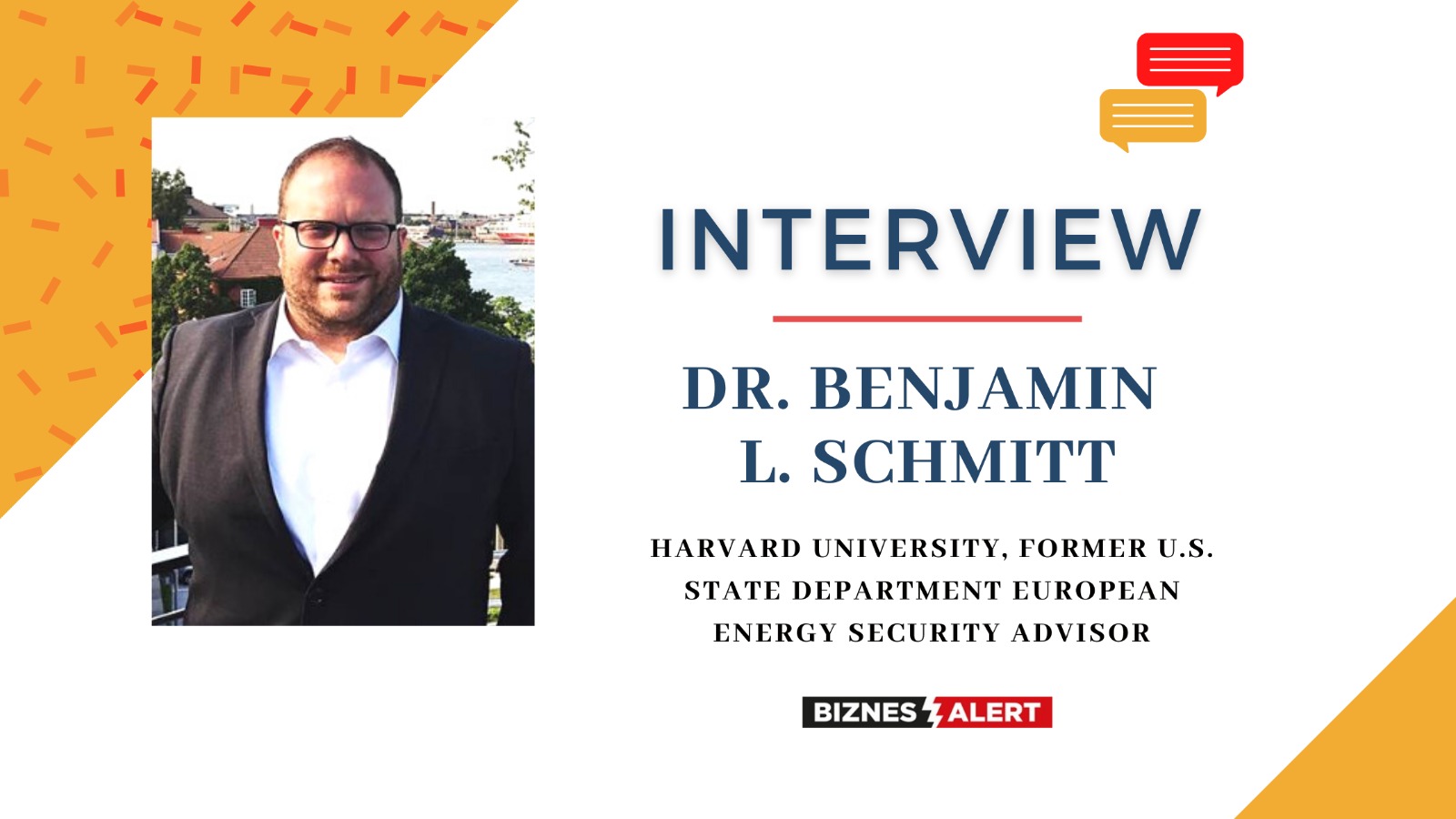 – Moscow tries to project a false sense of Nord Stream 2 momentum ahead of what are likely the final sanctions actions that the US Congress will take that will de facto stop the project for many years if not for good – argues Dr. Benjamin L. Schmitt, Harvard University, and Former U.S. State Department European Energy Security Advisor in an interview for BiznesAlert.com.

BiznesAlert.pl: What is the reason behind American sanctions on Nord Stream 2?

Dr. Benjamin L. Schmitt: Supporters of Nord Stream 2 have long attempted to falsely paint U.S. opposition to the Gazprom project as a polarizing ‘Trump-led’ issue, hoping to erode support for the policy among Trump’s many opponents, as well as among project opponents across Europe that have strong concerns with Mr. Trump.  It’s a guilt-by-association tactic, as President Trump is with good reason unpopular in many European countries.  The reality is, however, opposition to Nord Stream 2 has spanned both Democratic and Republican administrations and is focused on countering Russian malign influence in the Transatlantic community and supporting Ukrainian national security and strategic stability.  Support for the technology-calibrated sanctions to stop the project has been broadly bipartisan on Capitol Hill for years, and that includes the latest round of NDAA sanctions aimed at stopping the project that are set to be passed in a few weeks well before the Biden Administration will begin.

Do Nord Stream 2 sanctions serve the goal of selling LNG as Russians state?

Let’s not forget: U.S. opposition to Nord Stream 2 is – and always has been – about national security concerns related to Ukrainian sovereignty, European energy security, and countering Russian malign influence in Europe.  Given that this pertains to physical infrastructure influence from Moscow, Washington has long viewed the situation as binary: either the project will come online and have this negative national security impact, or it will be stopped, thus mitigating these concerns.

Remember when this was signed – mid 2015, right in the shadow of Russia’s illegal annexation of Crimea and aggression in Eastern Ukraine.  In this context, the project was born a controversial one, and in spite of the mantra from some politicians in Moscow, Berlin, and Vienna that Nord Stream 2 is “just a commercial deal” it’s in fact being built not to bring significant new volumes of Russian gas to Europe, but to supplant the gas already transiting Ukraine.  Only 9.9 of the 55 bcma project is even designed to even be delivered to Germany and points West – not an Energiewende project to supplant German nuclear production as some project supporters falsely assert.

And with this technical reality in mind, it is clear that U.S. opposition to Nord Stream 2 is in no way about selling US LNG as Nord Stream 2 promoters claim.  If Nord Stream 2 is stopped, there will not be a resulting market opened for US or any other global LNG supplier since the project is aimed at diverting existing Ukrainian transit.  We saw this reality on a smaller scale earlier this year when TurkStream came online and the Kremlin was able to largely turn off the TransBalkan pipeline route via Ukraine to Romania and Bulgaria.

What would be the impact of the new sanctions package included in the Pentagon budget proposal?

The latest round of sanctions include provisions for both insurers and pipeline certification firms, and due to this I think it is highly unlikely that the project will ever come online.  Even if Gazprom or other Russian firms were to decide to simply accept a sanctions designation and find a way to slowly complete the pipeline construction, perhaps without international insurers, it’s highly unlikely that any reputable western certification firm would undertake sanctions risk in order to provide the certifications allowing the project to become operational.  In other words, once Congress passes the NDAA, it is likely the end of the road for Putin’s quest to complete Nord Stream 2.

This position is bolstered by the announcement last week that Nord Stream 2 certification firm DNV GL will reduce its exposure to Nord Stream 2 sanctions by suspending its work on the project – this is a massive blow to the potential that the project will be able to be successfully completed since without certification it can not come online.

The reports that Gazprom announced that pipe construction will continue is in my view a purely public relations move by project supporters.  This is because the work announced only encompasses 2.6 km of the pipe route in the German Exclusive Economic Zone that, due to the shallow depth, is not targeted by existing or proposed NDAA sanctions.  The deeper water work in the Danish Exclusive Economic Zone is the real hurdle as it is covered by both existing and proposed NDAA sanctions and is not part of what is being announced at this time.  As a result, I read this announcement as a push by Moscow to manufacture a positive headline after the news from DNV GL just a day earlier, and to project a false sense of momentum ahead of what are likely the final sanctions actions that the US Congress will take that will de facto stop the project for many years if not for good.