Błażowski: getting rid of the atom is like throwing away lifeboats from the sinking Titanic (INTERVIEW) 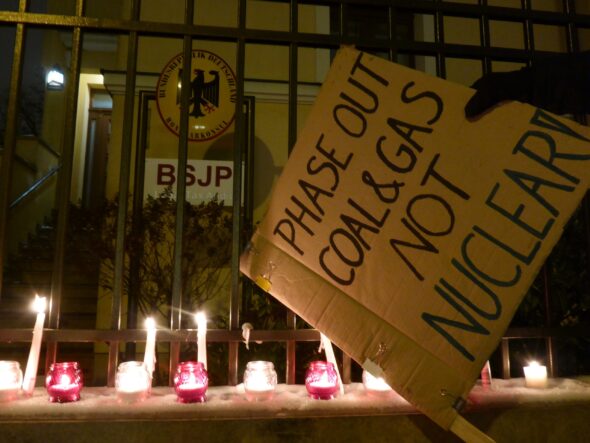 “Germany wants to shut down its last nuclear reactors at the end of 2022. This is comparable to a situation in which the crew throws out working lifeboats from the sinking Titanic, because they do not like their color,” says Vice President of FOTA4Climate Adam Błażowski in an interview with BiznesAlert.pl.

BiznesAlert.pl: FOTA4climate organized a series of events in several Polish cities to express your opposition to Germany’s phase-out of nuclear energy. What gave you this idea? How did the events go?

Adam Błażowski: FOTA is an environmental organization, and one of our goals is to change the way we talk about conservation. We strive to make climate action more pragmatic, so that anti-scientific dogmatism does not hinder our main mission of saving biodiversity and, as a consequence, human life.

More and more people are noticing that the opposition of traditional eco-narratives to effective tools for saving nature is counter-productive. It weakens and compromises the idea. It is difficult to rationally explain what is happening to low-carbon nuclear power in Germany. 4 GW of low-carbon nuclear power was turned off, which is half of the needs of the Polish industry.

Two years ago, we had protested outside the Philippsburg power plant, which was destroyed a few months after our protest, and was eventually replaced by the newly built Dattlen IV coal-fired power plant. The expansion of RES is not going according to plan, so mines are coming back. FOTA4climate organized a protest at the Brandenburg Gate, we invited climatologist James Hansen who was the first to testify in the US Congress on the coming climate change.

At the end of December, in several cities, we lit candles outside consulates of the Federal Republic of Germany to pay tribute to workers of these power plants, who are climate heroes and must now destroy the work of their lives. This was a really sad event.

Germany wants to close its last nuclear reactor this year. How will this affect its energy mix, the stability of the grid and further decarbonisation policy of the energy sector?

Considering the ongoing energy and climate crisis, this is the worst possible decision. This is comparable to a situation where the crew throws out working lifeboats from the sinking Titanic, because they do not like their color. Germany is not an island, it is unlikely to face serious problems with the energy system, because a number of neighboring countries can help it during critical winter days and weeks. The country also still has very large capacities in coal and natural gas, and it is unfortunately these capacities that will replace the largely deactivated atom. Green Party politicians have already declared that Germany will not meet the climate goals in 2022 and 2023 because of this. Achieving further targets will depend on a very risky and difficult plan to expand renewable energy sources and replace the remaining coal and nuclear capacity with natural gas.

Despite the opposition from the Greens and others in Germany, the atom was included in the EU taxonomy. What will this mean for the Polish and EU energy policy?

This is a step in the right direction, we need to remember that quite recently nuclear power was excluded from the Recovery Package. It happened due to pressure from, among others, Germany. However, the debate is moving towards pragmatic agnosticism in low-carbon technologies. Every country should decide on its decarbonization path. Until now it has been very difficult, as the discussion was dominated by one narrative, but now we have more healthy competition, a variety of ideas.

The two co–chairs of the German Greens – Robert Habeck and Annalena Baerbock – have become the heads of ministries that will be of strategic importance for the energy transition in Germany and will promote the specific solutions in this area on the international stage. What decisions about nuclear power in Europe can we expect from the new German government?

The coalition agreement enshrines measures against the involvement of any EU funds in the development of nuclear energy. Germany will probably try by all means to achieve this goal, but it is very much alone in Europe in this regard. It is no secret that the Germans agreed to include the atom in the taxonomy under the condition that France greenlight German gas. It is unfortunate, because gas does not meet the climate criteria, but the German government itself is divided on this issue.

Now the taxonomy will probably go to the European Parliament where the opponents of the atom will have to choose whether they want to reject the whole taxonomy and bury the huge amount of work that has been put into it, or accept it and move forward with the energy transformation. This whole mess could probably have been avoided if in 2019, during the Finnish presidency, the Dutchman Bas Eickhout of greenEFSA had not excluded the atom from the draft taxonomy. From the beginning nuclear power met all the climatic requirements for technology, but the politicians managed to spoil it, as a result, natural gas also landed on the table. This makes the taxonomy largely toothless, in fact it only limits investments in coal, which are already unprofitable today.

Poland should wisely use natural alliances in the Union, there are already a lot of pro-nuclear countries, so we just have to fight for our rights. Our country cannot afford the German version of climate protection, because it is extremely expensive. In addition, in anti-nuclear countries such as Austria, some are calling for “loosening” climate goals, because they may “risk” the need to invest in the atom. It’s a very damaging narrative. It is in our interest to use renewable energy and nuclear energy to diversify the systemic risks that could result in blocking the transition. The world and the climate are changing before our eyes. Without the atom and renewables, there will be no just transition.