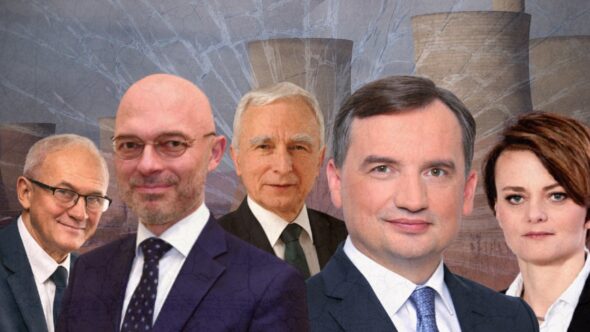 The boom in the number of Polish companies that want to engage with the the small nuclear reactor technology will not repeat the fate of the shale craze if specific actions are taken quickly. In the background of this discussion, lurks the criticism of the policy of the Ministry of Climate and Environment from the RES and coal lobbying groups in Poland. Both groups at the opposite ends of the dispute over the energy strategy are united against its creators – writes Wojciech Jakóbik, editor-in-chief at BiznesAlert.pl.

Another energy boom with a political dispute in the background

KGHM has joined a growing group of state and private companies that are declaring their commitment to small nuclear reactor technology. Earlier, the state-owned PKN Orlen and the private ZE PAK announced letters of intent with Synthos Green Energy about cooperation on SMRs. The latter company has a contract with GE Hitachi for access to the BWRX-300 technology, which has been certified in the USA and is to release its first reactor in Canada, and then – if the process is successful – also in Poland, thanks to cooperation with Orlen and ZE PAK. The company led by Daniel Obajtek (Orlen – ed.) is more cautious than the optimists at the coal mining complex near Konin (ZE PAK – ed.). “We realize that GE Hitachi Nuclear Energy is yet to build its first small reactor, but the pre-certification process is already underway. However, the first SMRs are already in construction in China and Russia. This is not a technology from “outer space”. Our partner has an agreement with GE Hitachi, the supplier of the BWRX – 300 reactor, and we have been working with them since the beginning and will continue to do so. We will be first in line to acquire know-how over the years. If we were entering into cooperation at the very end, we could pay more and we would not gain the necessary experience,” president Obajtek told me in a recoded interview during the Economic Forum in Karpacz. ZE PAK is counting on a small nuclear plant in Konin with 4-6 reactors, 300 MW each. Regardless of the fate of SMRs in Poland, the announcements of Zygmunt Solorz-Żak’s company sent its stock prices soaring and allowed it to end the first half of 2021 with a net profit of PLN 20 million. Only recently ZE PAK shares cost less than PLN 10, and now they hoover around PLN 20. The giants are followed by the smaller players. Even Unimot, a fuel importing company, has declared interest in SMRs. Objectively, this is a desirable technology, because it makes it possible to locally generate stable and zero-emission energy. This will reduce power prices for the industry, that fears for its competitiveness in the era of high prices. In this respect, KGHM has taken a step forward by signing a letter of intent directly with NuScale, which has SMR technology, without the intermediation of Michal Sołowow’s Synthos. However, also in this instance everything depends on the pace of certification of this technology in Poland. It is also worth adding that all kinds of SMRs require new provisions containing, among other things, safety standards. The new regulations will be drafted only as a result of effective legislative work, the pace of which in relation to the energy sector varies heavily, as it was the case with the liberalization of the distance act.

So we are dealing with a new energy boom in Poland after shale gas, electromobility and hydrogen. However, successful implementation of this technology is a prerequisite for success. The barriers to its development have already been outlined by PSE (state-owned operator of the power grid – ed.), which has offered consultations on the conditions for the connection of small nuclear reactors to the grid and their participation in the certification of the overall power market. The suggestion made by ZE PAK that it could buy energy from an NPP in the Kaliningrad Oblast still lurks. Depending on the interpretation, that move is either a plan shelved for later, or a motivator for the government to cooperate. The Government Plenipotentiary for Strategic Energy Infrastrcuture Piotr Naimski, who rejected the possibility of importing energy from Kaliningrad, shows a more conciliatory attitude towards SMRs in Poland. “The small reactors, known as SMRs are perhaps the future, but a distant one. Their application will be mainly for industry, e.g. chemical industry or in geographically isolated places with limited energy demand. If private businessmen decide to undertake these studies, implementations, then fine. These investments will be pursued at the same time as we will be implementing the large, governmental project, but there is no competition here, ” Naimski said on radio Siódma9. “The problem is that these SMRs are not here yet and that the first one will be built perhaps in several years,” he added.

However, the political context clearly shows that big and small atom projects compete with each other. The opponents of Minister Naimski’s policy promote the idea that SMRs could be developed earlier, and perhaps replace the plans for large state-owned atom, thanks to the efforts of private companies (presumably ZE PAK). However, it is worth recalling that PKN Orlen and KGHM are state treasury companies controlled by the Minister of State Assets and Deputy Prime Minister Jacek Sasin. Unofficially, Sasin’s department is sceptical about the plans to launch the first large nuclear reactor in Poland in 2033. Thus, one can see how the liberal (so to speak) line of criticism of Piotr Naimski’s nuclear plans is being drawn. His opponents on this side of the barricade argue that Poland has not been open enough to energy imports that allow it to reduce prices on an ad hoc basis, and that he has designed an energy strategy (Poland’s Energy Policy until 2040, PEP2040- ed.), which did not take into account the renewable energy revolution, and a significant increase in the price of CO2 emission allowances under the EU ETS.

On the other side of the barricade there is a similar criticism of Naimski’s team, with whom Michał Kurtyka, the Minister of Climate and Environment, is associated. This is the view of the United Poland represented in energy policy by former deputy minister of state assets Janusz Kowalski, who argues that Poland should have never agreed to a new target to reduce CO2 emissions by 55 percent by 2030, on the basis of which the controversial Fit for 55 regulations were created. In his opinion, Poles should veto the EU’s climate policy and create their own ETS akin to the British model. Kowalski and other critics of Naimski’s policies believe that he has not defended coal enough, which will still be used due to the shortage of new generation capacity, despite the plan to rely on gas, considered by this faction as a threat to energy security. This view is shared by the liberals from the Ember think tank, which warns of a gas trap. However, one side believes the solution is coal, while the other puts its hopes in renewables.

Deadlock in the government and alternative ways of energy development

The two “lobbying groups” – one rooting for coal and the other for renewables, are therefore criticising hand in hand Poland’s Energy Policy until 2040 helmed by the Naimski-Kurtyka duo. At the same time, the rise in political tensions accompanying the protracted dispute over the Turów mine may lead to new reshuffles within the current ruling team, unless it decides at some point to hold early parliamentary elections. However, it is difficult to imagine what a new stabilization would look like after the possible changes on the political positions in the government. PEP2040, criticized by coal advocates for being too radical and RES advocates for being too conservative, is a compromise between the most advanced demands of the coal-defending social side and the reality of accelerating climate policy. However, the United Poland rejected it already at the stage of government talks, and is now joining forces with the Confederation, which is not part of the governing coalition, in criticizing Piotr Naimski and defending coal. This truce could be seen in the same reaction United Poland and Confederation had, after it had been decided that the interview Naimski gave to Ewa Stankiewicz on the TV Republika channel would not be aired.

All of this means that, just like BiznesAlert.pl has predicted, the dispute over Poland’s energy and climate policy is unravelling the governning coalition. It has been speculated that Michał Kurtyka will be replaced either by Jadwiga Emilewicz (supporter of renewable energy) or Krzysztof Tchórzewski (defender of coal). However, it is not clear whether either of them would guarantee the support of the entire ruling coalition, and tensions will grow with the increase in energy, heat and gas prices in 2022. The current state of play creates a stalemate and has resulted in Polish state owned companies taking alternative paths of development with PSE and Gaz-System on the one side of the barricade and PKN Orlen or KGHM on the other. It doesn’t look like that the current, shaky balancing act could be replaced with a true stability in the near future.