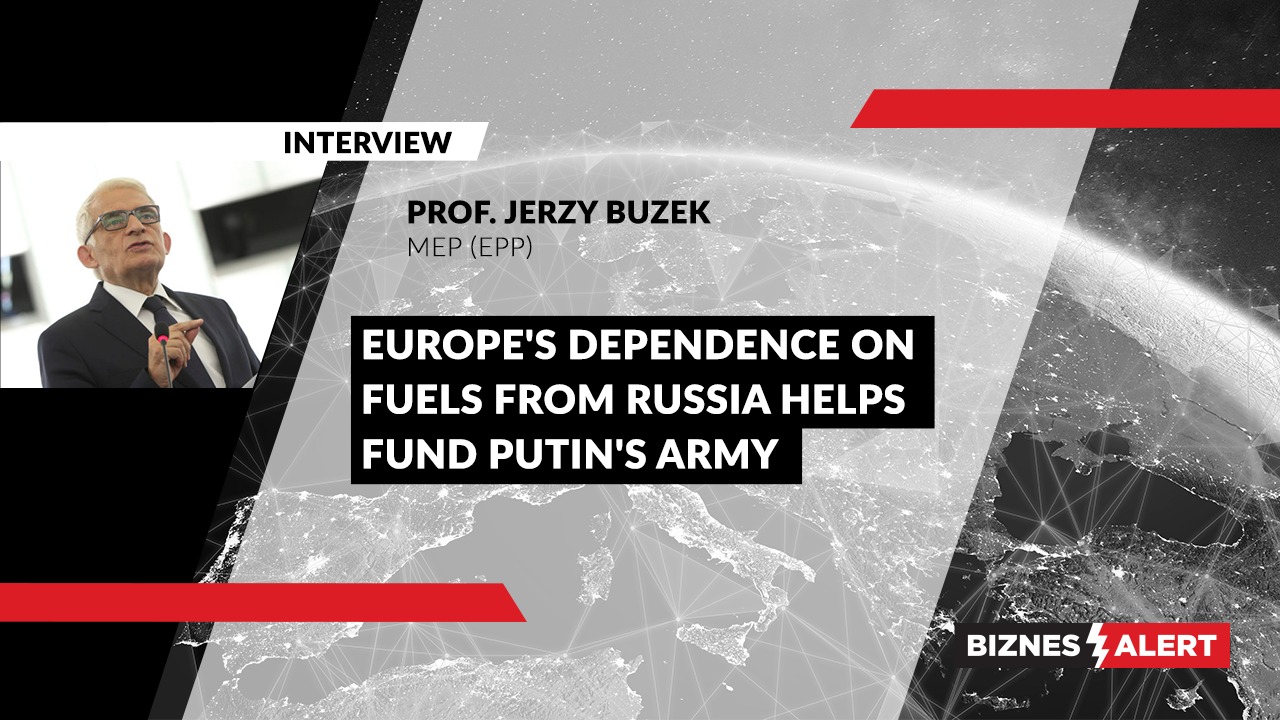 The war in Ukraine shows that our dependence on gas, oil and coal is pushing us to the brink of climatic doom, and is helping to finance the deadly missiles with which Putin’s army is currently shelling civilians, homes, hospitals, schools and children’s homes – says prof. Jerzy Buzek, former prime minister and current Member of the European Parliament.

BiznesAlert.pl: What should we do about the European Union’s climate policy in the face of the Russian aggression against Ukraine and calls for the suspension of the EU ETS?

Jerzy Buzek: We must remember that Putin uses the money we spend on Russian gas, oil and coal to buy tanks, missiles and rifles. So should the European Union’s climate policy, which aims to eliminate these three sources of energy, be called into question?

Russia’s thuggish aggression against Ukraine – Poland’s neighbor – and thus the Union’s – the accounts from barbarically bombed towns and villages or the photos of terrified women fleeing the war with their children – are shocking to the civilized world. For these crimes, Putin will go down in history as a villain. The fact that we are witnessing war again in Europe is shocking. We have only just begun to emerge from the trauma we experienced in the spring of 2020, when the COVID-19 pandemic erupted almost overnight. In the EU alone, hundreds of thousands of people died suddenly, tens of millions became seriously ill, and millions lost their jobs and livelihoods.

Unfortunately – then and now there are those who use these two difficult experiences in a cynical and calculated way for their own political ends, including for attacking EU climate policy. It’s extremely harmful and irresponsible. The epidemiological crisis of the last two years and the current tragic events in Ukraine confirm why this policy should be – contrary to what the populists are calling for – absolutely continued! The coronavirus has shown how a false sense of total control can suddenly turn into a complete helplessness of humanity in the face of external threats – not just global warming. And the war in Ukraine shows that our dependence on gas, oil or coal is pushing us to the brink of climatic doom, and it is also helping to finance the lethal missiles with which Putin’s army is currently shelling civilians, homes, hospitals, schools and children’s homes.

But will the ongoing crisis slow down the energy transition?

It shouldn’t. The main objectives of the European Green Deal – the reduction of CO2 emissions for 2030 and 2050, agreed by the governments of all member states, remain unchanged. What can change is the strategy for achieving these goals and how to achieve them. There are questions about the greater role of the atom, the extension of the ETS to encompass the construction and transport sectors, and how to reconcile the shift away from coal with the reduction of Russian gas imports. This needs to be talked about, but it is quite different from populist calls to halt work on the Fit for 55 package or to suspend the ETS.

I would like to reiterate that today we can clearly see the European Union’s targets of a minimum of 40 percent of renewable energy sources by 2030 or the ban on new combustion cars in 2035 are the way to combat global warming, as well as dependence on energy resources from Russia. As a Union we buy there 57 percent of gas, 43 percent of coal and approx. 30 percent of our oil – and this money feeds the Russian budget, especially the military! In this sense, those who demand that we slow down or stop the energy transition are walking in Putin’s squads. Consciously or not-it does not matter.

You mentioned nuclear and gas energy – how will the decisions with regard to the taxonomy affect security of supply, which is so important in the face of the threat of a world war?

The delegated act on taxonomy that is being discussed at the European Parliament – contrary to the voices that are sometimes heard – neither excludes the possibility of investing in either of these two sources of energy, nor does it over-promote it. This is a compromise-even if, as is the case with compromises, it is a little imperfect. I wanted-I have been asking the European Commission for months-not to eliminate gas from the taxonomy, and therefore temporarily open up to investments in this area. This raw material has a great potential-especially in the heating sector-to accelerate the transition away from coal in the coming years, often imported from Russia. Also, it is important that gas is not imported from Russia. In Poland, this is doable, thanks to projects carried out with the huge support of EU funds, such as the LNG terminal in Świnoujście, which is currently being expanded, or the gas pipeline Baltic Pipe from Norway and Denmark – a project already started under my government.

When it comes to nuclear power, if the delegated act is approved-and there are many indications this will happen-all the cards regarding the construction of such a power plant will be in the hands of the Polish government. And if we are serious about this investment, it is high time to start putting these cards on the table- this has been going on for a decade and a half, six Polish governments have changed during this time!

How to continue Ukraine’s energy integration as part of the Energy Community? And how to further develop this community in the face of the threat of an attack by Russia?

It is crucial to complete and finalize Ukraine’s synchronisation with the EU electricity system as soon as possible – at the meeting of my Committee on Industry, Research and Energy (ITRE) on Thursday, I strongly urged the EU Commissioner for Energy Kadri Simson to do so. The initial test last week that took place already during the war was successful. I believe that the matter will be treated as a priority by the EU and will be resolved positively in the near future.

As far as the Energy Community itself is concerned-that is, the countries neighbouring the European Union to the east and in the Balkans-I have the impression that, for at least some of its non-EU members, the Russian aggression against Ukraine will only accelerate their implementation of EU energy law and the process of integration. The best examples are Moldova and Georgia, which in recent days have applied for EU membership.

And how to grow the Energy Union to which you, Mr Prime Minister, have already significantly contributed?

I think there are two aspects that are most important. Firstly, when I proposed in 2010 – together with Jacques Delors – the European Energy Community, later known as the Energy Union, one of its main objectives was that no one should ever be cold again in the middle of winter in children’s homes, hospitals or schools because of interruptions in gas supplies, mainly from Russia, which happened in 2006 and 2009 in the EU. Today, unfortunately, it is particularly important that no more lethal bombs fall on any children’s homes, hospitals or schools, financed by Putin also with EU money for fuel supplies. It is therefore necessary-as I have already said-to move away from gas, oil and coal imports from Russia as quickly and completely as possible. A robust and comprehensive strategy and specific and binding targets for member states, including in the area of diversification, are urgently needed.

And secondly, if we want to continue the energy transition-and I see no alternative – in the context of the ongoing war at our borders and the economic slowdown caused by the COVID – 19 pandemic, it should be genuinely just and socially acceptable. People need to feel that it is done “with them” and “for them”, in a transparent, thoughtful and honest way. In this context, it is important to, among others, urgently put an end to the speculations within the ETS market, which can negatively affect the price of CO2 emission allowances and, as a result, the electricity bills. That is why I recently tabled in the EP, with a group of MEPs from different countries, a corresponding amendment, already referred to by some as Lex Buzek, which excludes financial institutions from the ETS market.

How do you assess the plan for delivering emergency gas supply to Europe?

I look at it with satisfaction, because it is primarily based on liquid LNG. And as chairman of the ITRE committee, firstly, I participated in the work on the EU LNG development strategy during the previous EP term and, secondly, I negotiated with the Obama administration to open up the export of this raw material from the United States to the Union. And it worked. At the same time, when we talk about the emergency supply of gas to Europe, we must not forget today, in particular, the needs of the Ukrainians. They are still – perhaps even more than before – counting on the supply of this raw material from the EU. We can’t let them down!

We have known each other for years, so I am sure you know the answer. No, no and no – this is not on the table at all. Moreover, I believe that no one in the EU has the moral right to enter into any new contracts with Gazprom or to extend existing ones. I will fight for this as part of the work on the new hydrogen and gas package, for which I am the rapporteur on behalf of the European Parliament. Russia is rightly subject to the most severe EU sanctions in history-some of them date back to 2014. There must be further consequences. And above all, we-as the European Union and all its member states-must be consistent.

Shell Polska’s CEO: Poland may become a gas hub if it wanted to
Energy
Shell has been present in Poland for 25 years. In an interview for BiznesAlert.pl Piotr Dziwok, Shell Polska’s CEO assessed positively the […]
More