Carpaccio with the Climate Minister 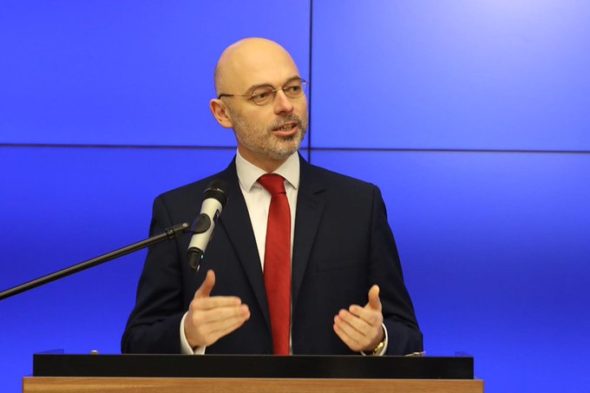 The Economic Forum in Karpacz will be an occasion to make several important announcements. However, one should not expect a breakthrough in the face of the decision paralysis caused by rumors about the government reshuffling caused by disagreements between coalition partners. Will the Climate Minister be sacrificed as a kind of an appetizer for the continuation of the fragile alliance? – asks Wojciech Jakóbik, editor-in-chief BiznesAlert.pl.

The economic event of the year, moved from Krynica to Karpacz, will, as usual, be an arena for lively discussions, among other things, on energy. However, we should not expect breakthrough political declarations due to the disputes in the United Right coalition, out of which one of the most important concerns the climate policy of the European Union. In line with the predictions made by BiznesAlert.pl, the supporters of Justice Minister Zbigniew Ziobro are attacking the Climate and Environment Minister Michał Kurtyka for agreeing to upping the 2030 CO2 emission reduction target to 55 percent , which was the basis for the creation of the Fit for 55 package. This, in turn, may lead to higher energy and heat prices by increasing the burden of climate policy, and redirecting more EU funds to actually combating climate change instead of maintaining the status quo. However, before it gets better, it has to get much worse, because the accelerating climate policy will undermine the insufficiently reformed conventional energy sector and the heating sector, which is still dependent on mainly coal. The Climate and Environment Ministry has responded with several ad hoc and long-term tools from the energy strategy, i.e. Poland’s Energy Policy until 2040.

“Poland has never referred to the increased 2030 EU target as an independent issue, but has linked it to key demands. A higher target for the EU does not automatically mean a higher target for Poland, which is why Poland has prepared a package of demands,” explained the Minister of Climate and Environment Michał Kurtyka in response to questions from Janusz Kowalski, the main critic of the policy of his department from United Poland. “The European Council conclusions from December 2020 include references to the need to address the imbalance between revenues and costs of installations within a country. This is a key point that will affect the number of emission allowances for Poland, and negotiations are currently underway in the EU Council to reflect its content in the legal acts prepared by the European Commission,” the response continues. Kurtyka claims that higher CO2 prices mean higher budgetary contribution to energy modernisation via the EU ETS and then through programs that facilitate the development of renewable energy sources and low-carbon transport. They are also to bankroll the Energy Transition Fund prepared by the climate department. Kurtyka also reminds that his department has introduced support in the form of concessions for the energy-intensive industry, and as part of the cogeneration fee to reduce the impact of energy and heat prices on industrial activities, as well as a discount for the capacity fee. He also points to the capacity market and investments in high-efficiency cogeneration as a remedy for the shortage of power plants and CHP plants in Poland, as well as the allocation of coal assets to the National Energy Security Agency under the auspices of the State Assets Ministry as a means to secure this conventional energy source. According to minister Kurtyka, the deadline for the commissioning of the first nuclear power unit in 2033 is real, and the “risk of delays” has been reduced by the use of the proven PWR technology, and cooperation with a foreign partner with knowledge and skills.

The negotiating manual for the representatives of Poland for the meeting of the Working Group of the Council of the European Union on Energy on the 2nd September 2021 in case of the need to assess the impact of the Fit for 55 package states: “we can agree with the EC assessment that the adoption of the Fit for 55 package potentially represents an important development opportunity for the Polish economy and will contribute to maintaining its competitiveness in the long term, but the EC’s summary does not adequately reflect the challenges facing Poland, including those that directly result from the adoption of the “fit for 55″ legislative proposals. The EC assessment is incomplete, because it does not take into account all of the very costly challenges facing Poland. The extremely high cost of the energy transition in Poland, and most of all the short time horizon to plan, implement and conduct economically viable solutions required by the Fit for 55% package should all be acknowledged as well.”

Critics of the Ministry of Climate and Environment argue that Poland should not at all enter into the discussion about Fit for 55 and instead it veto solutions related to it, as long as such a possibility exists. Defenders of this approach argue that only the consent to the package gave the opportunity for further negotiations on compensation, which is mentioned by the head of the climate ministry in the dialogue with Janusz Kowalski.

The dispute over Minister Kurtyka reached the echelons of the goverment, when the Polish Prime Minister Mateusz Morawiecki assured that he did not plan to reconstruct the government or dismiss the minister. However, the increasing costs and high power and heat prices may become a serious topic during the 2023 parliamentary election, provided it won’t take place earlier. For now, the United Right coalition is tearing at the seams, and the opponents of the minister may demand his resignation, as a kind of Carpaccio, a side dish sacrificed for the continuation of this increasingly fragile alliance. Even if Prime Minister Morawiecki does not want such a solution, it is not clear what the President of the Law and Justice party Jarosław Kaczyński will decide. This stalemate has an adverse effect on the energy industry, which doesn’t have time to wait for politicians to reconcile. It must end as soon as possible, so that Poland can successfully negotiate the best conditions for its energy transition.

The coronavirus may worsen energy poverty in Poland (INTERVIEW)
Energy
“Half of households in Poland that suffer from energy poverty experience financial poverty as well. If wages go down and unemployment goes up, […]
More

Kidawa-Błońska: Energy sector should be professional and non-partisan (INTERVIEW)
Energy
“Energy policy is to a large extent dependant on the government. The president’s role is to offer support wherever it is needed,” […]
More

PKEE members ensure the energy security and support the actions against coronavirus
Energy
Companies associated with the Polish Electricity Association (PKEE) are consistently continuing their operations in the face of the epidemic threat, […]
More