Policy paper is a part of a project “Third Central European Day of Energy” which was organized by CEEP in cooperation with the European Commission and was supported by Visegrad Founds. Full report is available here.

Regional cooperation has become one of the genuine pillars of European energy policy. It is pursued in all five dimensions of the Energy Union: security of energy supply, internal energy market, energy efficiency, climate policy and research and development. The Central European states have developed numerous cross border initiatives, which further enhanced functioning of their energy systems. The main aim of these efforts has been to advance development of the gas and electricity sectors both in terms of infrastructure and liquidity of the markets. Regional cooperation in Central Europe is not merely limited to hard infrastructure development (mostly related to gas sector) and currently, it increasingly focus on market integration, reliable functioning of the electricity sector and energy related innovations. 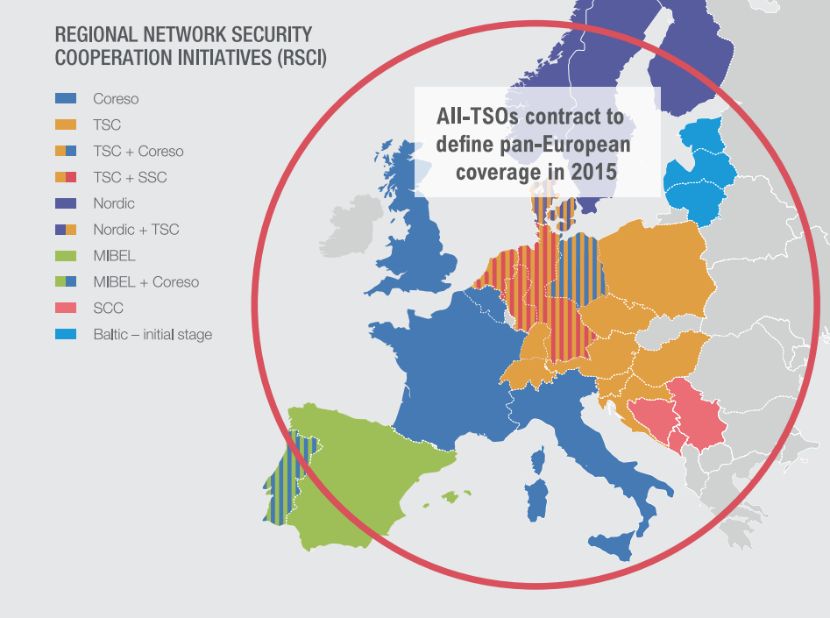 The European Union is actively supporting energy projects that are particularly relevant to cooperation plans between the Member States. Regional cooperation is seen as an important building block of the Energy Union and a viable way of countering cases of supply interruptions in the future by means of increasing market liquidity and interconnectedness. The EU financial instruments, namely European Energy Programme for Recovery (EEPR), European Regional Development Fund (ERDF) and Connecting Europe Facility (CEF) that is guided by Projects of Common Interest (PCI) lists, do have a critical role to play in this context. Central Europeans countries have been very successful in using the CEF financial support: approximately 80 projects have already received support from the CEF. It proves the outstanding absorption potential of CEE to witness the multitude of projects that are being developed in the region.

The EU provides also forums which help to coordinate energy policy of Member States facilitating different joint projects. High Level Groups like Baltic Energy Market Interconnection Plan (BEMIP) and Central and South Eastern Europe Energy Connectivity (CESEC), bring together representatives from EU countries in the region, transmission system operators, and regulators. They provide a political platform helpful for strategic steering and policy guidance on technical topics. The importance of BEMIP was crucial for development of infrastructure in the Baltic Sea region and terminating energy isolation of the Baltic States.

Similar role have multilateral institutions like ENTSO for electricity and for gas and ACER. Concerning the former, it facilitates horizontal cooperation by the respective transmission system operators. Its work is key for harmonized development of infrastructure in the EU. Within ACER have been developed Regional Initiatives framing cooperation among the National Regulatory Authorities, transmission system operators, the European Commission, national governments, and energy companies. Their work pave the way for market integration and regulatory cooperation.

Importantly, Central European countries have developed bottom up venues of cooperation. The longest, but also the most developed and important regional cooperation in Central Europe is the Visegrad group. Energy has been for a long time an important cross-sectional topic for the Czech Republic, Hungary, Poland and Slovakia with the North–South energy corridor being one of the main priorities of the group. An important step forward was achieved in 2016 when the Permanent Forum of Energy Regulators was established. In addition, V4 countries regularly hold international conferences on energy security and gas supply, have a functioning expert working group on energy and have their energy think tank platform, supported by the International Visegrad Fund. Other important bottom up projects include recently launched Three Seas Initiative or ongoing process of Baltic single gas market establishment.

Result of regional cooperation are the most clearly visible on the example of gas sector. Development of systemic interconnection became the paradigm for regional cooperation in recent years. In this context, an ambitious plan for the construction of the North-South Gas Corridor – a set of interrelated gas transmission infrastructure projects that connect Central and Eastern European markets from the Baltic to the Adriatic and the Black Seas – is particularly important. Its implementation requires the cooperation of public administrations, national regulatory agencies and private undertakings. North-South Gas Corridor itself was also recognized at the EU level. It has become one of the priority gas corridors within the Trans-European Network for Energy (TEN-E) strategy. Currently, with many projects completed or underway, Central European states have shifted their focus to physical diversification of supply possible thanks to projects such as LNG terminals or pipelines opening access to alternative sources of supply: Baltic Pipe, BRUA pipeline, Eastring, Gas Interconnector Greece – Bulgaria (IGB). 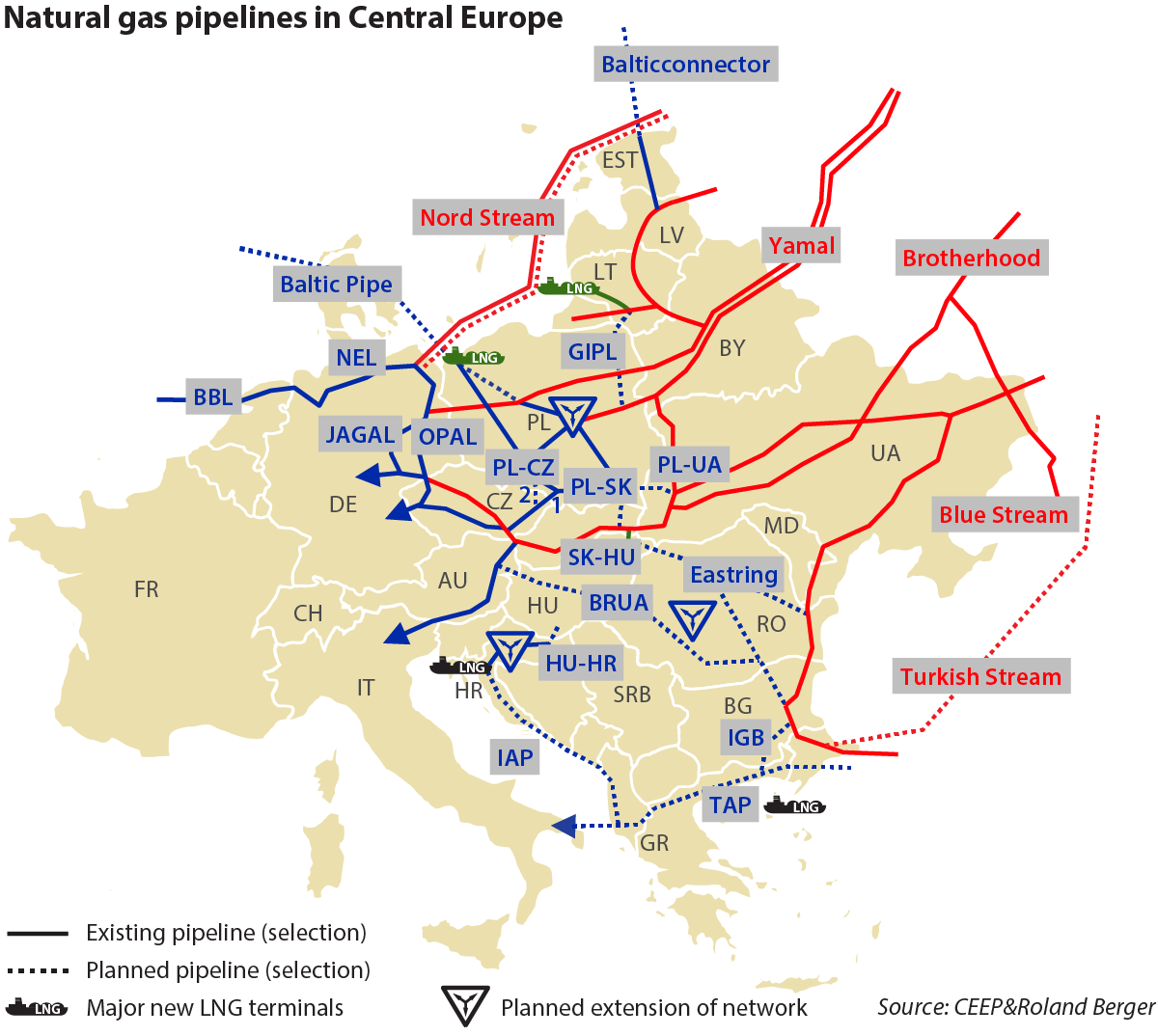 Within electricity sector, regional cooperation is also bringing tangible results. One of the best examples is Regional Security Coordinators (RSC). The RSCs perform services for the TSOs, such as providing coordinated operational safety assessments, short- and medium-term system adequacy projections, coordinated capacity calculation, coordinated outage planning and common network models. Most of Central European countries are part of RSC TSCNET, which was established in 2008. It serves Austria, the Czech Republic, Slovenia, Denmark, Croatia, Germany, Hungary, the Netherlands, Poland, and Switzerland, as well as Slovakia and Romania from 2018. Baltic countries are included in the separate Baltic RSC, which was created based on the Baltic Regional Security Coordinator Agreement signed in October 2016.

The other fruitful example is Market Coupling (4M MC) which has integrated day ahead markets of four countries: Czech Republic, Hungary, Romania and Slovakia. The 4M MC has been considered as one step towards the single European power market and an intermediate step in the regional market coupling solution. Such developments are accompanied by dynamic development of infrastructure – reinforcement of domestic systems and construction of new interconnections. Finest example of it, is synchronization of Baltic states which should be completed before 2025.

Emerging field of cooperation are innovations. Entities from Central Europe are usually participating in projects that involve partners beyond the region, from all over Europe within Horizon 2020 Program. Several of them have solely regional focus like ACON (Again Connected Networks) between the Czech Republic and Slovakia, SINCRO.GRID, improving reliability of electricity supply between Slovenia and Croatia. Central European countries are top manufacturers of vehicle components, and therefore actively interested in the development of e-mobility. Several entities from Central Europe have joined EBA and are engaged in the different work streams of this organization. These are namely from: Czech Republic – HE3DA, MES; Poland – PKN Orlen, Lotos Lab, Rafako, KGHM, Grupa Azoty, Polish Development Fund; Lithuania – Invest in Lithuania Agency.

Central European countries are fully engaged in regional cooperation both within the EU initiatives as well as along horizontal lines within V4 or 3SI. Crucially, such cooperation is already brining tangible results that are visible for example, in already constructed infrastructure projects and market integration. Certainly, Central European states are the winners in regional cooperation and further tightening of this process is in their vital interest. It is a means of increasing performance of their domestic markets and their resilience to supply shocks.

An important role in this process is played by EU bodies, which through the implementation of various programs and initiatives support it in order to create significant synergies for achieving the objectives of the EU energy policy. These include synergies in such areas as: security of supply and diversification of energy sources, competitiveness and unification of the internal energy market, increase in energy efficiency, sustainable development, research and development of innovative technologies of energy production and transmission, and construction of new energy infrastructure, including connections between national systems.