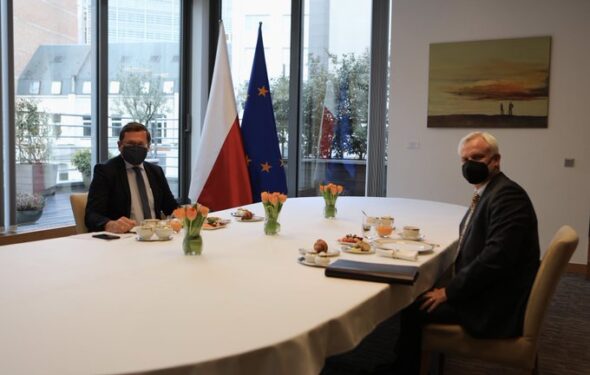 What goes on in Poland on the 12th of March.

According to Fitch Ratings “the EU’s rising CO2 prices since December 2020 contribute to transition risks of carbon-intensive utilities, particularly if they remain structurally high beyond 2H21, through greater pressure on margins and decarbonisation”.

“Poland is among the countries most exposed to CO2 pricing. We expect that the additional CO2 burden will be largely reflected in wholesale electricity prices, but some of the least efficient coal-fired power plants will be pushed out of the market by imports. Profitability may be eroded in 2022 once the existing hedges roll off, but this will be mitigated by capacity payments from 2021. Suppliers of electricity could be hit if they are unable to fully reflect higher electricity purchase costs in prices being offered to retail customers,” the report continues.

The agency’s analysts also state that “for Polish utilities higher CO2 costs are mostly passed on, albeit gradually narrowing, to end customers, and offset by capacity payments. PGE Polska Grupa Energetyczna, Enea and Tauron have integrated business profiles with around 40-75 percent contribution from more stable electricity distribution. They also have headroom under our leverage guidelines for their current ratings and the government has announced plans to segregate their coal-related assets into a separate entity.”

Poland talks with the US about Nord Stream 2, the climate and Russia

Poland’s Ambassador to the EU, Andrzej Sadoś talked to the US acting chargé d’affaires to the Union Mark Libby in the representative office of the Republic of Poland to the European Union. The disputed Nord Stream 2 gas pipeline, climate and Belarus were among the topics.

Poles talked with Americans about trade, climate policy, relations with Russia and the situation in Belarus.
The US is considering extending sanctions against Nord Stream 2, which could theoretically stop the implementation of this project. Meanwhile, construction is accelerating, although in recent days it has been stopped by a storm.

Polish Briefing: Russia fears the LNG deluge. PGNiG can count on better prices from the USA
Polish Briefing
What goes on in Poland on the 28th of December. Related posts: Polish Briefing: Denmark won the war of nerves in case of Nord Stream 2. Russia is […]
More

Polish Briefing: Visegrad integration should be based on common values
Polish Briefing
What goes on in Poland on the 26th of September Related posts: Polish Briefing: USA hits with sanctions. Juncker worried about Nord Stream 2 […]
More