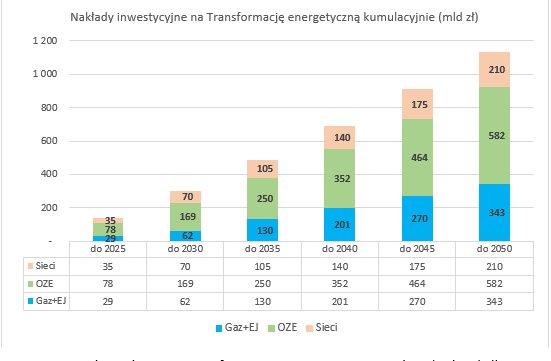 The total costs of Energy Transformation in Poland are estimated to be over €250 billion by 2050. Renewables represent the highest cost reaching €130 billion (60% of the total costs), assuming a modest RES share of 50% in 2050. Transforming conventional power plants requires €53 billion for the gas scenario, increasing to €75 billion when nuclear plants are included in the energy mix. Finally, the development of electricity networks counts for near €50 billion. The rise of RES generation to 70-80% of the total electricity production will increase RES costs to over €1000 billion before 2050. The Just Transformation Mechanism’s support of the European Union can provide near €3.8 billion by 2027, which counts for about 5.5% of the total expenses required before 2030 – writes prof. Władysław Mielczarski from Łódź University of Technology.

The cost calculations for the Energy Transformation to 2005 have been carried out with the use of the following assumptions:
1. The decarbonization program will be completed before 2050, eliminating lignite and hard coal as fuels from electricity generation.
2. The production of electrical energy after 2050 employs three leading technologies. (i) renewables, (ii) natural gas, and (iii) nuclear power stations.
3. Shares of renewables in electricity production count for 32% in 2030r, 40% in 2040, and 50% in 2050r. The assumed RES shares are very modest, considering discussed RES targets reaching 80% before 2050.
4. Two main scenarios embrace: (a) Gas, in which lignite and hard coal are replaced by natural gas plants, mostly CCGT units, and (b) Gas+Nuclear, in which new generating assets include four nuclear power units, each with 1000MW rated power.
5. Overnight costs of new generation for 1GW of the installed capacity range to: (i) CCGT unit = US$1 billion, (ii) EPR nuclear power station = US$10 billion, (iii) offshore wind farm = US$4.3 billion, (iv) onshore wind farm = US$1.8 billion and PV panel farm = US$1.9 billion.
6. Financial cost calculations assume: (a) discount rate = 8%; (b) time of amortization from 25 – 40 years depending on technology; (c) Cost recovery factor (CRF) = from 2.5 – 3.5 depending on amortization time. The nLCOE method was used for the cost computation.
Simulations have been performed using the program eMix dedicated to energy mix calculations. The eMix is based on the MILP (Mix Integer Linear Programming).

The total cost of Energy Transformation in Poland exceeds €250 billion, including transforming conventional power plants into gas and nuclear units. It counts from €53 billion in the Gas simulation scenario to €75 billion when nuclear power plants are incorporated into the energy mix. The renewables cost reaches near €130 billion for both options. It embraces expenses for new developments and substitutions of worn-out units. New network construction and refurbishment will cost near €50 billion, mainly to upgrade low and middle-voltage lines for accommodating renewable generation. The total costs of Energy Transformation in Poland amount to near €230 billion for the Gas option increasing to near €250 billion when nuclear power units are included in the energy mix. The total cost provided by the eMix simulation is closed to the data published by Bank Pekao; however, there is no substantiating information for such figures published by this bank – Table 1.

The simulation results presented in Fig. 1 indicate that the most significant component of the Energy Transformation cost arises from renewables and their increasing shares in electricity production. It is worth noticing that the assumed share of RES generation is very modest as it counts for only 50% in 2050. Increasing renewables to 70-80% in electrical energy production will entail the cost upsurge to over €1000 billion – Fig. 1. 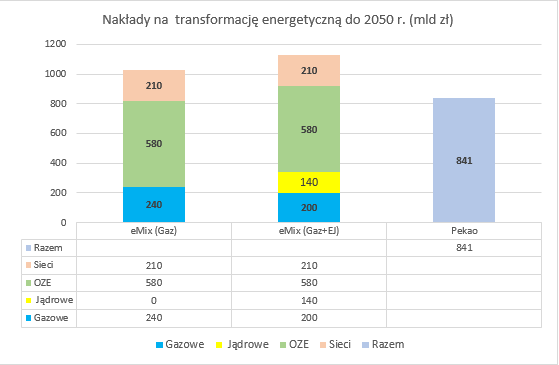 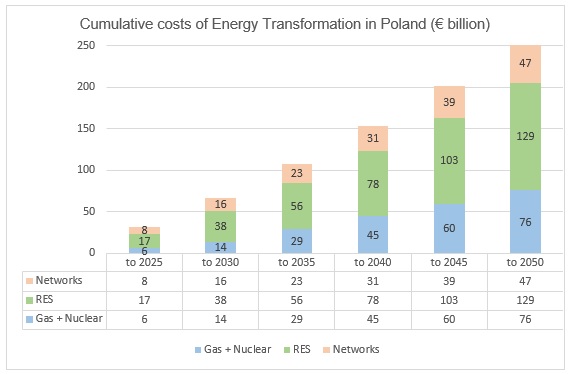 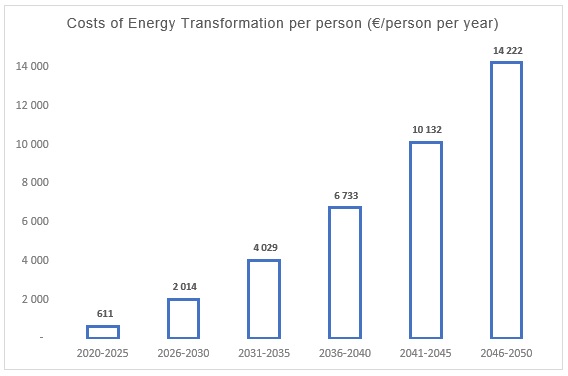 The cost of transformation is a significant burden for energy users taking into that an average monthly salary equals about €1300, and the labour force counts for only 13 of 38 million of the total population.

Wróbel: transport may impede the European Green Deal, which could contribute to […]
Energy
Everybody knows Henry Ford’s famous quip that his Model T, produced at the beginning of the previous century, was available in any color as […]
More

A just energy transition will be costly (REPORT)
Coal Energy
The capital of Belgium was the venue of the “Balancing Coal and Climate: What is a ‘just’ Energy transition?” conference organised by the […]
More