Durham: Westinghouse will build first nuclear reactor in Poland on time if it is chosen (INTERVIEW) 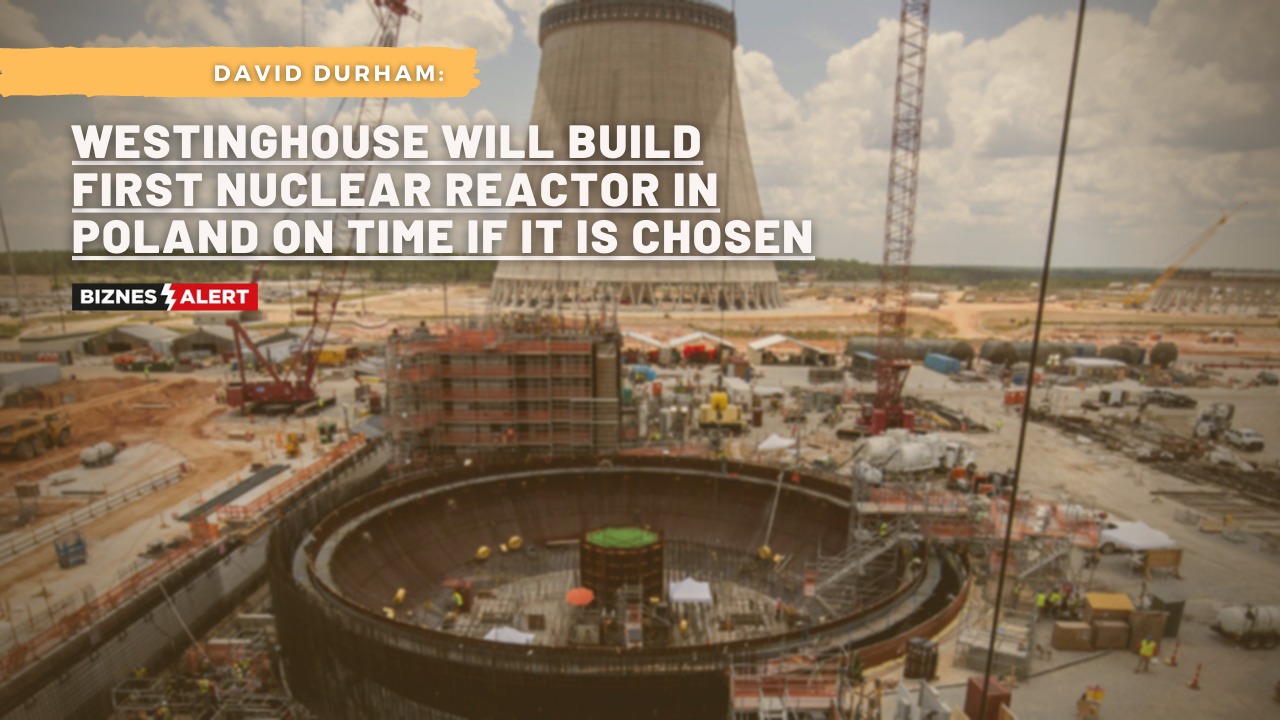 We have six nuclear power plants – there are four ready and operating, two more under construction. We do not have to change the design. Others need to. This is a difference that would influence the schedule heavily – states David Durham, Westinghouse’s president for Energy Systems.

BiznesAlert.pl: Westinghouse is opening its office in Warsaw and wants to take part in Polish nuclear programme. Is first nuclear reactor in 2033 feasible in the light of multiple delays of such projects around the world?

2033 is feasible but it depends to some extent on the decisions that Polish government needs to make. As soon as they select the technology and sign the contract the schedule is under Polish control. It is also important what technology is chosen. Were they to select our technology, we overcome the obstacles from the past and this technology is proven and stable. We have six nuclear power plants – there are four ready and operating, two more under construction. We do not have to change the design. Others need to. This is a difference that would influence the schedule heavily. We have the safest reactor with only fully passive security system. It is simpler, more effective and setting performance records already in China. We have a design that is complete and will not change. Building a reactor that is first of a kind implies multiple risks translated into longer schedule. The same goes with small modular reactors. There are lot of good potential SMR designs out there but none of them have been constructed. None of them meets Polish expectations. SMR might be less expensive in total but it is not clear if it will ever have a competitive levelized costs of energy like big nuclear reactors.

Is there a support from Washington? What about the news about Joe Biden shutting down the nuclear industry?

We need, want to and have big support from White House. Intergovernmental agreement reiterated by Biden’s administration specifies activities of U.S. government which has multiple financial instruments to support Polish and other nuclear projects: nuclear in Czech Republic, Slovenia, Ukraine, fuel supplies to Ukraine. It is all in our interest and has support from Washington. It is up to four sovereign nations to choose the partner but there is a great synergy opportunity from the business perspective for the whole region. When it comes to Poland it has to comply with European regulations so it has not selected technology yet. But under the intergovernmental agreement there are specific declarations helping to make a choice.

There are multiple analyses in Europe saying that it is not feasible to build nuclear energy and better choice is natural gas combined with renewables. What is your answer?

If you stay with natural gas, you will never reach climate neutrality. Natural gas is also a temporary bridge technology. Nuclear industry has proven that the same design repeated over and over brings greater efficiency of construction, costs. This has been seen when it comes to Japanese example of ABWR reactors from XX century and present Chinese project of four nuclear reactors AP1000 from Westinghouse. We have been there from day one. Schedule and costs got better with every consecutive unit. You take the same work force, technology and you change the site so the efficiency grows. The schedule is largely driven by constructor. There is no universal schedule depending on the site, sometimes factors like seismic activity. But it is certainly feasible to build a nuclear reactor from first concrete works to fuel loading in 60-72 months. We can achieve this if we repeat a solution that is already working instead of looking for first one of the kind from the scratch. Our schedule might be influenced by the funding scheme. But we are not the provider of finance. We have a schedule based on needs of ordering equipment, some structural modules and some cashflow plan. As long it is met, the schedule will be accelerated.

Do you need Polish or other contractors?

We want to localize the project as much as possible. Our plan is to use American Bechtel as a construction manager to improve performance but we want to have Eastern European contractors. Our involvement for construction is 20 years but we will be hopefully provide fuel, maintenance support and so on for almost 80-100 year. It is a longer perspective than most marriages and lives. We are already looking at investments in Poland today and will have more announcements about this in near future. The most gaining branches from the Westinghouse perspective are design and equipment. We have already identified 340 companies from Poland as potential suppliers for our nuclear project. We are working with them one by one to figure out together what they need to do to be nuclear qualified. Bechtel will do the same with construction companies in Poland. We envision that huge percentage of this project will be undertaken by Polish companies. It is a massive amount of jobs connected to construction directly and great incomes for the regions. There are also multiple indirect jobs and those connected to refueling. 80-100 years of operation mean many hundreds of high paid, high technology jobs.

What is your answer to the nuclear waste issue if Westinghouse is building Polish nuclear reactors?

That issue does not need to be resolved today. There is a small quantity of waste, it can be reprocessed for new fuel, it can be put into repository which is safe. There are some repositories in place and more building. Poland could decide about its own deposit.

What is your view on European and Polish regulatory discussion on nuclear energy? There are some countries opposing nuclear. The regulatory environment in EU is different than in China.

You never going to have a 100 percent support. There is a couple of countries against nuclear energy but growing support for nuclear energy in most of European Union gives us confidence that we can succeed. The regulatory framework in EU makes it totally possible to have first reactor in 2033 as long as the technology is chosen and contracts are signed on time.

Do you have a clear signal from Poland that it wants to make decisions on time?

Absolutely. The choice is to be made in 2022. If all the circumstances that I mentioned are met, it is absolutely possible.