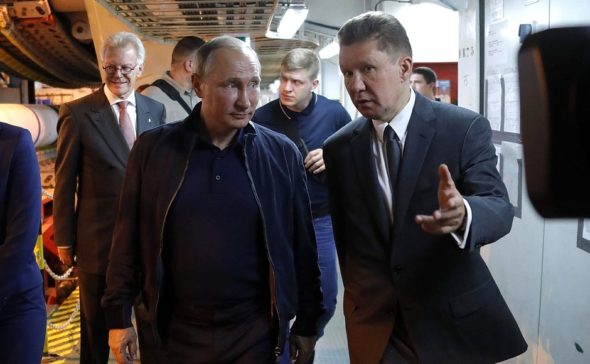 The Russian ambassador to Poland argues that Gazprom did not use gas as a weapon. That’s not true. The company is capitalizing on the energy crisis, and wants to use it to force an early launch of the Nord Stream 2 gas pipeline. The answer to this is a common European policy, for example with the help of strategic gas reserves, which will be discussed by the Council of the European Union, writes Wojciech Jakóbik, editor-in-chief at BiznesAlert.pl.

Gazprom is not letting Europe off the hook, because it doesn’t want to

“It is a misrepresentation of reality to claim that Russia reduces or restricts gas transmission to Europe. The Russian company Gazprom fully complies with its contractual obligations to European partners,” wrote the Russian Ambassador to Poland Sergey Andreyev in a letter to the Onet.pl portal. That’s a half truth. The problem is that Gazprom does not increase supplies beyond the quantities contracted in long-term contracts, although according to the International Energy Agency it could up them by as much as 15 percent. The figures presented by the Russians themselves reveal this.

The Fitch Agency predicts that Russia’s revenues from the sale of hydrocarbons will reach 9 trillion rubles (USD 125 billion) in 2021 due to the energy crunch, which is causing a sharp rise in commodity prices. This would be a better result than in 2019. In September Fitch upped the forecast for Russia’s GDP in 2021 from 3.7 to 4.3 percent. The Russian government expects an increase by 4.2 percent in 2021 and 3 percent in 2022-24.

According to the Federal Customs Service, Gazprom’s revenues from gas exports in January-August 2021 doubled to USD 28.4 billion, due to an increase in prices by an average of 15.2 percent month-on-month in August, or to USD 282.4 per 1,000 cubic meters. However, deliveries from Russia increased by only 11.7 percent, compared to the same period of 2020, during which the pandemic hit, and amounted to 140.6 billion cubic meters. Gazprom’s revenues in August 2021 were three times higher than in the same month a year earlier, but gas exports fell by 2.3 percent in the same period. The figures reveal that Gazprom is not increasing exports by as much as it could. President Vladimir Putin himself has already reconsidered this matter and promised Europe a more gas via Gazprom’s electronic platform. “If this is how we beat the peak demand, we can do it, but only without harming ourselves, of course,” Putin reportedly told the Energy Minister Alexander Novak. The Kremlin couldn’t resist this opportunity to promote the disputed Nord Stream 2 gas pipeline. In its opinion, while there are several ways to reduce the price of gas, one is obviously the best. “Of course, the first solution is to complete the certification process and quickly issue an approval for gas transmission via Nord Stream 2,” Novak said during the conversation with Putin.

Some countries are already suffering because of this. Moldova, which is associated with the European Union as part of the Energy Community, asked the European Union for help after Gazprom reduced gas supplies to this country despite the energy crisis in Europe.

“It is a misrepresentation of reality to claim that Russia manipulates the transfer of gas for political purposes. On the contrary, the Russian gas exporter Gazprom in its activities is guided by a responsible approach to its obligations, the desire for long-term, predictable, mutually beneficial business relations with foreign partners, and, of course, the natural reason for economic efficiency,” wrote the ambassador. None of this is true. Armenia and Belarus, which cooperate with Russia with regard to foreign policy, receive subsidized gas prices. Countries that sign long-term contracts like Hungary get rebates. Lack of such cooperation ends painfully, as in Moldova. “Those who signed long-term contracts with us, are now happy with their prices,” said Elena Burmistrova, head of Gazprom Export.

Gazprom is not just about doing business

The cheapest solution to increase gas supplies to Europe is to up the transmission via Ukraine. However, Gazprom decided to build the Nord Stream 2 pipeline bypassing this country, because it wants to replace the Ukrainian route, instead of adding an extra one. The price of gas that will perhaps one day flow through the new pipeline across the Baltic is a topic of speculation, and the actual cost of supply via the longer route may be subsidized by lower gas prices for Gazprom customers such as E. ON, ENGIE, OMV, Shell and Wintershall, all of which coincidentally agree that the Russians fulfill their contracts.

“It is precisely in order to avoid the associated risks, including transit risks, that solutions such as Nord Stream and Nord Stream 2 are needed. They offer a shorter, safer, cheaper and more environmentally friendly way of transporting gas to Western Europe, allowing us to meet the growing needs of our partners quickly and on mutually beneficial terms in crisis situations, despite various obstacles,” the Russian ambassador argued, repeating the narrative from the Kremlin’s Sputnik with special attention to the ecological argument, forgetting that the largest leaks of methane, a GHG more harmful than CO2, occurred on the… Yamal pipeline.

According to the data of the Ukrainian operator OGTSUA, there is no economic justification for Nord Stream 2. Below I present data with which the Russian embassy could argue, but doesn’t. “Gazprom estimates annual gas sales to Europe at over 200 billion cubic meters. The actual export to the European Union amounted to less than 150 billion cubic meters in 2020. Export to Europe, including Turkey and the UK peaked at 175 billion cubic meters. The existing transmission capacity from Russia to Europe is more than 270 billion cubic meters, including the Ukrainian gas transmission system, the Yamal-Europe gas pipeline, Nord Stream 1 and Turkish Stream, or 286 billion cubic meters if we include the Blue Stream pipe. It is apparent that there is no need to build additional gas infrastructure to supply the volume Gazprom claims it provides. In other words, in the coming years the supply system from the east to the west will have about 100 bcm of free capacity annually. If Nord Stream 2 starts operation, the spare capacity will reach about 150 bcm a year. This proves that there is no commercial or technical justification for bypassing the existing pipelines,” explained Sergiy Makogon, president of OGTSUA.

Did Gazprom cause a gas shortage in Europe on purpose?

It is also necessary to disregard the tall tales about the political actions taken by the US and the European Union against Gazprom. The Russian ambassador extrapolates the characteristics of his own company to rivals on the international arena. “Gazprom, however, should reckon with political and other non-economic factors affecting its operations — such as attempts at pushing the Russian concern out of European markets through illegal sanctions and speculating with the principles of European and Euro-Atlantic solidarity, reviewing post-factum agreements concluded with Gazprom through lawsuits and arbitrary administrative decisions, and even stealing gas from transit pipelines in order to blackmail Russia to obtain unreasonably low prices, as had happened in the past in Ukraine,” the ambassador wrote in the letter to Onet.pl. Of course, this is a comment on the growing LNG supply coming to Europe from the US, as an attractive alternative to Russian supplies, and the revision of the European Union Gas Directive, which has made Nord Stream 2 subject to the law, which may mean further economic and regulatory challenges for the pipe, and may result in the deliveries never actually launching. The Russians may manipulate the gas supply in order to force an early opening of the contentious pipeline.

The two below graphs prepared by the recognized analytical center ICIS show how Gazprom deliberately restricts the supply of gas to Europe and utilizes its gas storage facilities to this end. This is an issue we reported on at BiznesAlert.pl in the past. While most gas suppliers seasonally increase purchases in the summer to replenish stocks (figure one), when the price of this fuel is low, only European warehouses with Gazprom shares were not replenished this summer (figure two). 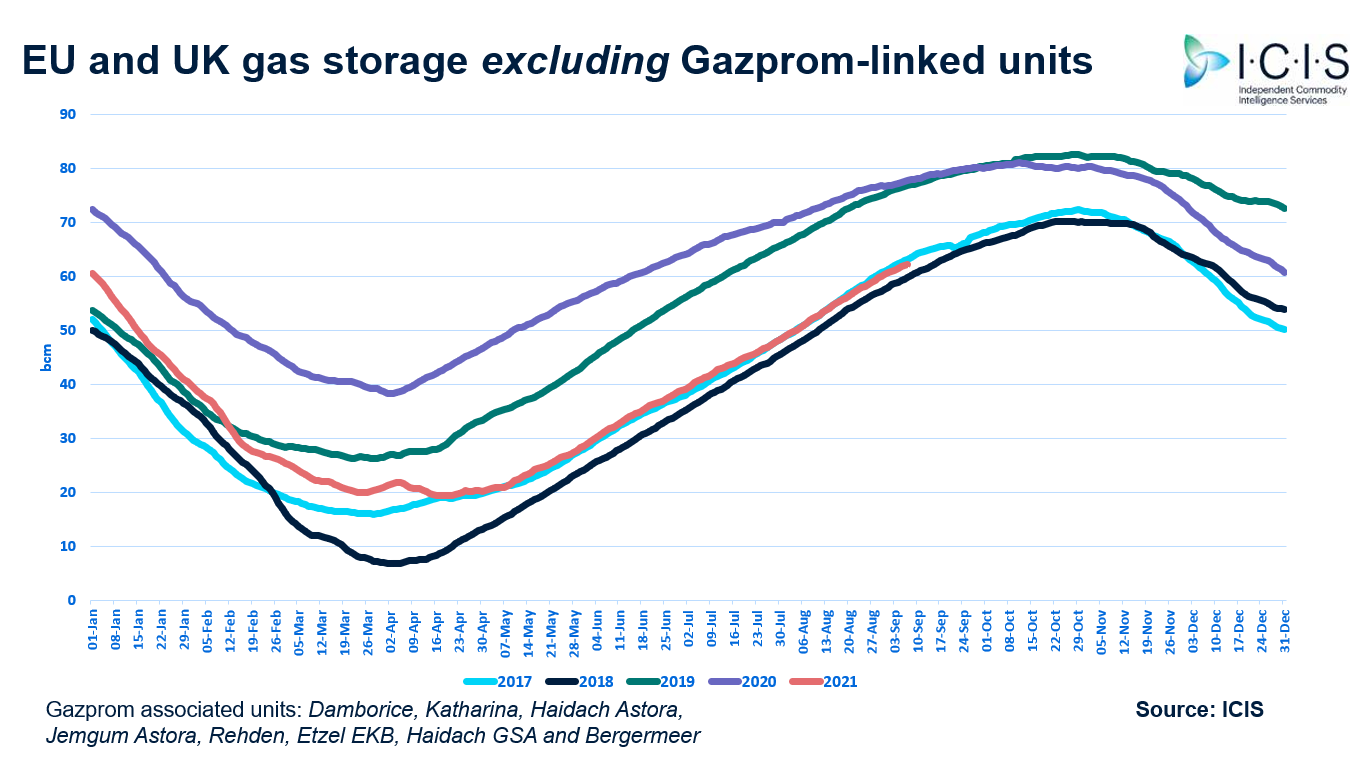 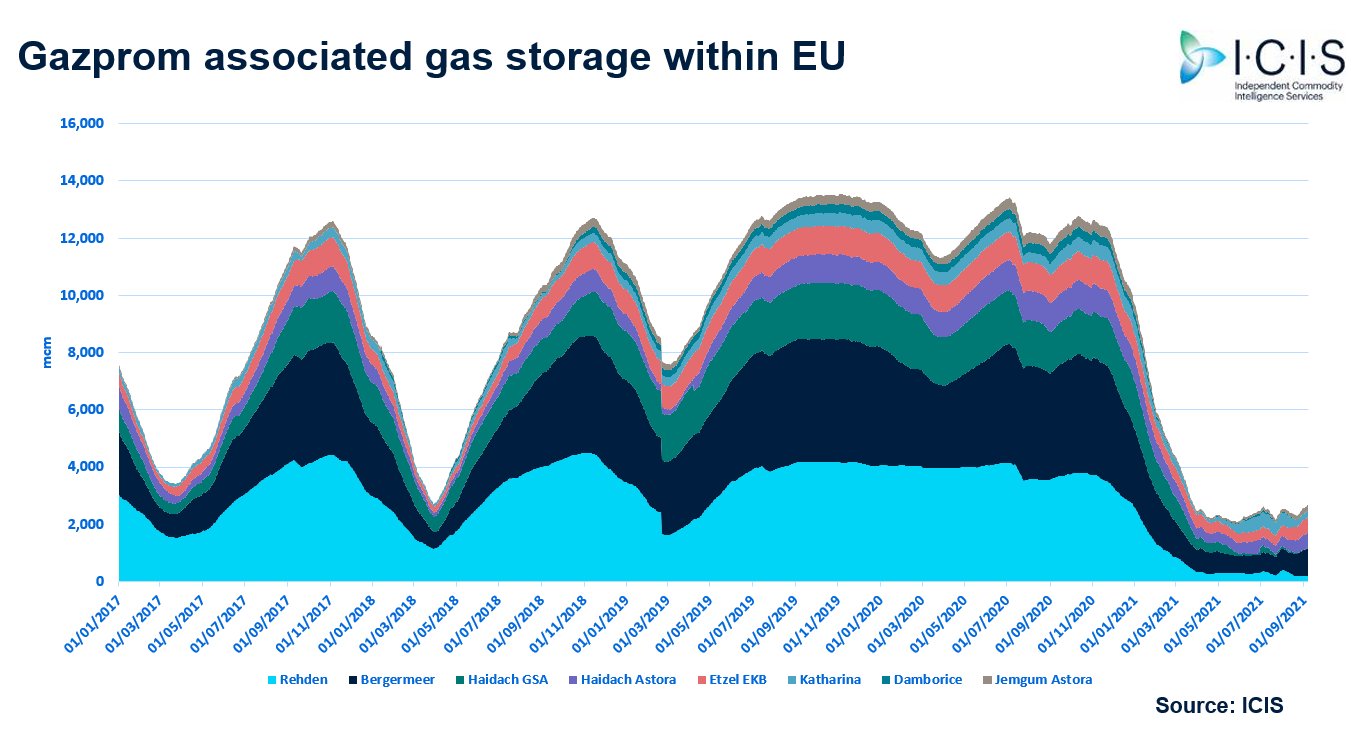 Unlike other companies, Gazprom has not replenished gas storage facilities in Europe. Graphics: ICIS

Also, the analysis of Natural Gas World confirms the claim made by the IEA that Gazprom has spare capacity to use. This topic should be examined in the second antitrust investigation, which was requested by, among others, the Polish Office of Competition and Consumer Protection. 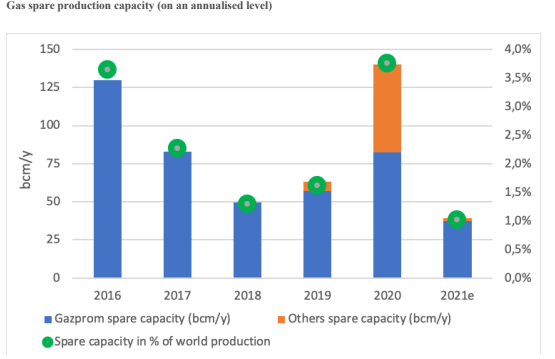 It is necessary to continue working towards becoming independent of Gazprom

This is an argument for developing a strategic gas reserve in the EU, which can be modelled after the solution introduced the USA. The topic will be discussed at the Council of the European Union scheduled for 21-22 October. According to unofficial information acquired by BiznesAlert.pl, the European Commission is reluctant to create strategic gas reserves due to the “non-market nature” of such a solution. Poland tried to push for them, but Western European countries, still seduced by the pseudo-market rhetoric of Gazprom, whose lobbyists in Brussels are effective, remain sceptical. The same attitude is visible in the case of the idea of joint purchases of gas resuscitated by Spain, which had been first proposed when Poland suggested an Energy Union should be established. However, if Europe is to learn any lessons from the history of relations with Gazprom, it should recognize that relations with this supplier always have a foreign and security policy dimension. Just like the crises started by Russia in 2006 and 2009 in Ukraine, the energy crisis of 2021 should also prompt Europe to create new tools to defend itself against the abuses of the dominant supplier, which last year was already responsible for 41% of supplies to the continent. One of those solutions are strategic gas reserves. Poland has introduced the Law on reserves on its own, so now it does not have to worry about a severe winter, because its storage is almost 100 percent full. Western Europeans relying on the invisible hand of the market, which often turns out to be the visible hand of Gazprom, are experiencing shortages that allow the Russians to push for the controversial Nord Stream 2 project, despite the common energy and climate policy, which requires them to become independent of Russian raw materials. A strategic gas reserve in Europe would not allow Gazprom to repeat the maneuver from the second half of 2021, so clearly visible in the presented figures.

Zaslavsky: Nord Stream 2 propaganda shows how Russia could divide and rule Europe (INTERVIEW)
GAS Nord Stream 2
Our report shows that Russians are capable to show opinions pretending to be European but are written in Kremlin. It is very delicate, very cunning […]
More