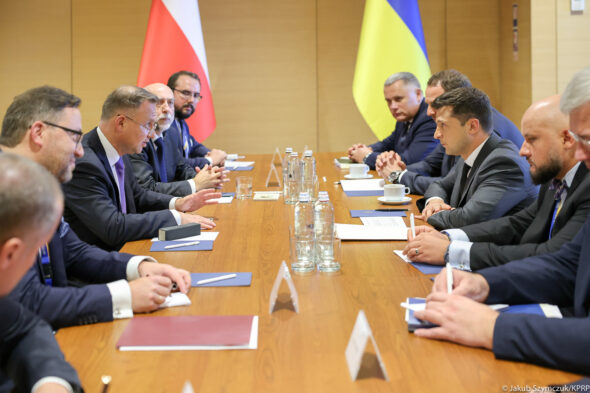 The Crimea Platform was an occasion to talk unofficially about Nord Stream 2. Poland and Ukraine played a significant role in those conversations. Together both countries can create an alternative to the supply system controlled by Putin’s pipe. They should start with solidarity in case Russia disrupts the supply, especially that Moscow is already cutting supply to Europe on purpose – writes Wojciech Jakóbik, editor in chief at BiznesAlert.pl.

With fire and sword, or with gas and the military

The divisions between the crown’s noblemen and the Cossack nobility (Ukrainians – ed.) that led to the downfall of the Polish–Lithuanian Commonwealth described in Henryk Sienkiewicz’s prose, belong to history. Today Poland and Ukraine work together against Moscow, which is occupying Crimea and using gas for political ends, of which the latest example is it limiting the gas supply to Western Europe to force the launch of Nord Stream 2 as quickly as possible. According to Volodymyr Zelensky, the German promise that the role of Ukraine’s gas sector after Nord Stream 2 will be to provide green hydrogen is “about the future”, whereas Putin’s pipe poses a challenge that is here and now. The draft deal on Nord Stream 2 has many carrots, but still too few sticks. On the pages of Le Figaro and Die Welt presidents Andrzej Duda and Volodymyr Zelensky have warned that the project may be used by Russia to orchestrate a new aggression in the region. Thus, the leaders stressed the security aspect of the proposed deal on Nord Stream 2 formulated by the US and Germany in July this year, an issue that is not talked about enough. The first novel in Sienkiewicz’s Trilogy was titled “With Fire And Sword”, which was a comment on the fratricidal wars in the Commonwealth where this type of weapons were used. In the 21st century Russians are waging their war against Poles and Ukrainians with fire (gas) and sword (the military). The Polish-Ukrainian alliance is making the supporters of NS2 remember about this aspect of the issue. This pertains especially to Germans and others who, contrary to facts, want to present the pipe as a business venture.

Supported by Poland, Ukraine demands specific security guarantees, that so far have been missing from the agreement on Nord Stream 2. On the 23rd of August politicians from Ukraine, Germany and the United States responsible for energy held a meeting to discuss the deal on the contentious Nord Stream 2 pipe. The talks are to be continued. The Independent Commodity Intelligence Services (ICIS) has ascertained that Ukraine allegedly sought to join the EU solidarity risk sharing system established under the SOS regulation. Ukraine wants to join a group of countries that would support one another in case of issues with gas supply. The group members already include Poland, Germany, Czechia and Slovakia. According to the ICIS source, Ukraine is concerned about a possible gas shortage at a CEE gas hub in Baumgarten this fall, due to the limited supply from Russia, a problem BiznesAlert.pl wrote about previously. If the plan pans out Germany will be responsible for guaranteeing a secure supply to the East at the point in Lanzhot on its border with Czechia. ICIS claims that Poland could benefit from the deal as well, as it would increase its chances at tapping into gas supply from Germany, that would complement the smaller deliveries via Ukraine, caused by a drop in transit across its territory.

The foiled return of Catherine the Great

In the past Poles have already tried to add Ukraine and other members of the Energy Community (e.g. Moldavia) to the solidarity risk sharing system under the SOS regulation, an initiative led by the former Polish prime minister Jerzy Buzek, one of the originators behind the Community. The regulation says that the regional energy solidarity group will exchange gas in case of supply shortages. It had been drafted after the gas crises in 2006 and 2009, and was then revised by, among others, Poles so that the stranglehold Gazprom has on gas storage facilities in Germany was not a threat to the security of gas supply to Poland. Here again a reference to Sienkiewicz’s novel is pertinent. The author’s memorable words about Catherine the Great crushing the Zaporozhian Sich (a disputed area ruled by Ukrainian Cossacks – ed.) are brought to mind when one considers the discussion on the security of gas supply to Europe. The amendment to the SOS regulation includes the solidarity rule, which is the foundation of the cooperation between regional groups. Germany was added to the group with Poles, making it offer gas from its system in case of problems, even if Gazprom does not want to provide gas from its German facilities, the biggest of which is called Katharina, named to honor… Catherine the Great, of which I wrote in 2015. The successful struggle to improve the European regulations increased Poland’s security, but in the future it may also increase Ukraine’s, provided that Kiev’s call is heeded across the European Union. For this reason it would be wise to include the Commission in the talks about the NS2 deal, which was wrongly replaced with Germany, which is trying to put on the EC’s shoes, and thus strips European integration of its credibility, especially when it comes to the gas sector. It should also be ensured that Russians emptying their gas storage facilities right before the winter season, which goes against market logic, will not lead to supply shortages in the European markets this fall. Poles and Ukrainians have warned about this. Polish gas storage facilities are full at 89 percent, and have a capacity of a little under 3.2 bcm. At the same time Ukraine wants to pump a record 20 bcm of gas into its storage before the heating season. Their western neighbors cannot claim they are equally prepared. The European storage facilities controlled by Gazprom are full at a record low 18 percent.

Poland and Ukraine can learn from history

Poles and Ukrainians could take another step and use the three-party cooperation with the US started during the Trump administration, as well as the investments promised in the region as part of the NS2 deal. Co-financing the construction of the Poland-Ukraine gas pipeline, for which neither the Poles nor the Ukrainians seem to be able to pay, would unclog the transit route in both directions, including to Ukraine which could receive 6.6 bcm a year. This move would make Kiev a true member of the SOS regime. Another step could be for Poland and Ukraine to jointly utilize their gas storage facilities to counterbalance the Gazprom-owned storage in Western Europe, which is fuelled by NS2. The Polish and Ukrainian storage facilities could take in LNG and gas from the Baltic Pipe, as well as other sources, e.g. Turkmenistan, which has been suggested by Ukraine. This is why in an interview with BiznesAlert.pl, the CEO of the gas transmission system operator by the Dnieper – OGTSUA has proposed a future where the energy security of NATO’s eastern flank will be strengthened thanks to an integrated gas hub, capable of providing up to 50 bcm of gas a year to the region, thanks to Poland’s diversified gas sources in Świnoujście (LNG terminal) and Pogorzelica (Baltic Pipe). It is worth reminding that the NS2 yearly capacity is 55 bcm. The gas and security sectors need to therefore respond to Russia fighting with fire (gas) and sword (the military). This is why the discussion on the security of the region after the annexation of Crimea should also be about the stability of gas supply and the other way around. The talks about the gas sector after NS2 also need to be about security. Poland and Ukraine can contribute to this debate, provided they receive efficient security guarantees and practical support with regard to gas supply. In the past arguments between our nations led to the disastrous collapse of the Commonwealth. The contemporary, successful cooperation in the gas and security sectors may bring a completely different outcome – further integration in opposition to the threat posed by Russia.

A deal on Nord Stream 2 is on the horizon
GAS Nord Stream 2
Russia wants to again use gas for political purposes and force Ukraine to make concessions in turn for maintaining gas transit across its territory, […]
More