Flisowska: More aid for mining is like pouring money down the drain (INTERVIEW) 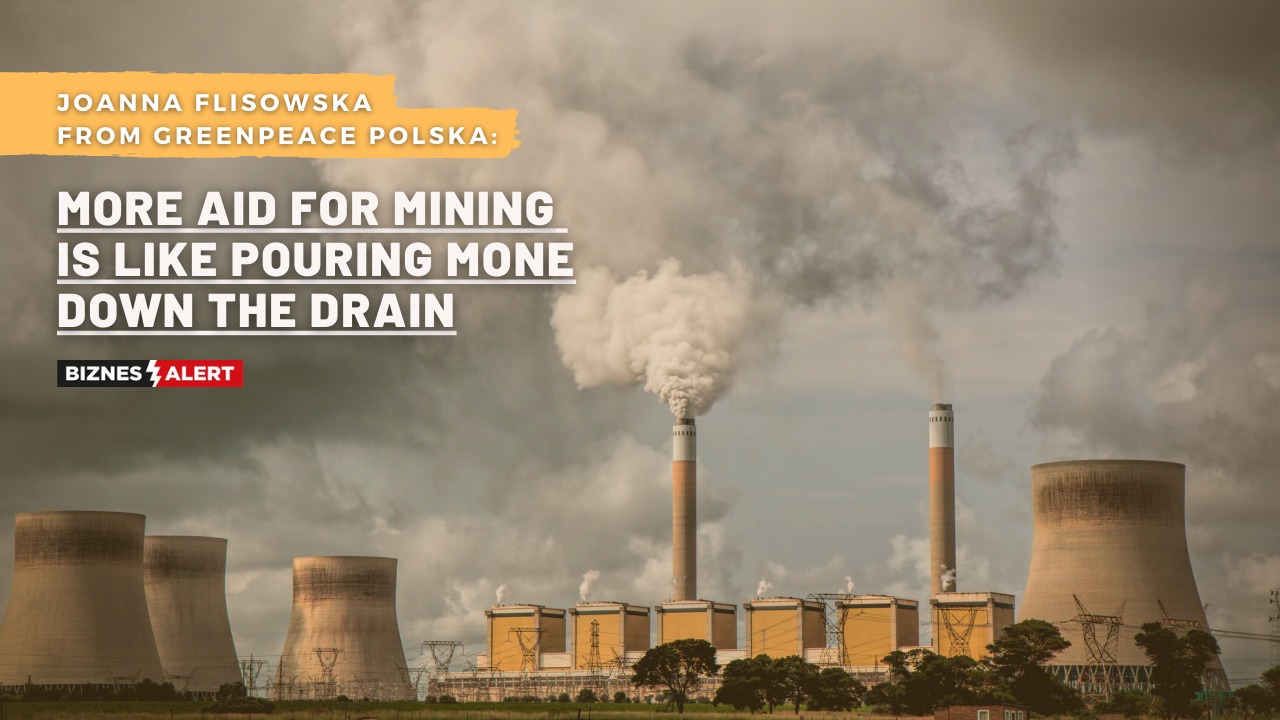 Providing financial aid to the mining sector is like pouring money down the drain, instead of addressing the root cause of the problem. There is no real plan to move away from coal, there is no plan for a fair transition for Silesia, and instead billions of zlotys are being paid out without consideration to postpone facing the challenges – says Joanna Flisowska, Head of Climate & Energy Unit at Greenpeace Poland in an interview with BiznesAlert.pl.

BiznesAlert.pl: The government has decided the mining sector will receive PLN 30 billion in aid. How do you feel about this decision?

Joanna Flisowska: This is like pouring money down the drain, instead of addressing the root cause of the problem. There is no real plan to move away from coal, there is no plan for a fair transition for Silesia, and instead billions of zlotys are being paid out without consideration to postpone facing the challenges. The bill was sponsored by an MP, so no proper impact assessments of this legislation were carried out. We managed to get hold of information on the reduction levels specific mines will need to meet to receive the support, but the Sejm’s official website doesn’t provide this data. This whole process is done in an untransparent way, and quickly. We are talking here about public aid, which was approved by the Sejm but not notified to the European Commission, and there are serious question marks about how Brussels will react to this. Subsidising mining activities is against EU law, and it is hard to imagine the Commission approving the aid in its current form, which means that these funds will have to be reimbursed and interest paid.

What can be said about the political aspect behind the support for mining?

On the one hand, support for mining was approved to calm the trade unions. It’s adding fuel to the fire. It’s not a solution. This is not about energy security – let me remind you that, at least on paper, the purpose of the subsidy is to reduce extraction, the Ministry of States Assets did not point to any analyses on how these subsidies would ensure energy security. This is a politically motivated action. It’s about not having to deal with the problem for as long as possible. We are the only country in the European Union that doesn’t have a deadline for phasing out coal, and is also not having a serious discussion about it. This shows how belated and isolated we are in the context of the energy transition. Once Germany phases out coal-fired power, we will be responsible for the majority of coal consumption in the European Union. The fact that there is no serious debate about how to carry out an energy transition in Poland, the dependence on coal is already beginning to undermine the situation of the Polish people, and the longer we delay, the worse it will be. From a climate protection point of view, there is no doubt that 2030 should be the deadline for departing from coal. However, at the moment, the government is not handling this at all, since 2015, no work has been done to plan the energy transition, to plan the transition away from coal and to support the development of renewable energy sources, in fact, their development has been stopped. The reason for rising energy prices in Poland is our dependence on coal and the situation on the European gas market. Renewables, such as onshore wind, which has been blocked in recent years, could help to reduce our electricity bills. But in addition to the RES issue, delays in upgrading the electricity grid lead to the fact that the energy transformation in Poland is not happening at the moment, while external conditions will force us to move away from coal much faster than the government currently anticipates. Due to the lack of preparations the costs will continue to grow.

How should the government shape the debate on moving away from coal?

When it comes to the just transition, there should be broad stakeholder discussions – on the one hand with workers’ representatives, and on the other with local communities, local governments and NGOs. Together, we should think about the future of the regions, which get by mostly thanks to the mining sector. Secondly, the miners need long-term support – not just severance pays, but also trainings and re-retraining programs. If the development of onshore wind power is unclogged, the industry will need a skilled workforce, which could be ensured by the employees of the existing energy sector. These opportunities are not being used now. The government could come up with more programs to help the employees of the sector find jobs in other economic sectors. It is necessary to say honestly that this process is inevitable, that the departure from coal will come and it is necessary to prepare for it.

In the context of the energy transition in Poland, there is talk of replacing coal with gas and, in the future, with nuclear power. So how do you assess the EU taxonomy?

It would be a scandal if gas and nuclear were to be considered green investments, because they simply are not. In particular, if you consider methane leaks inevitably associated with natural gas, it is difficult to call it a green source. We see what is happening on the gas market in the European Union, there is no indication that the situation is going to improve, so the dependence of Poland on gas is the wrong direction, because it make the energy transition, which already puts us on the path to renewable energy sources, more expensive. Same with the atom. This is not a solution for Poland, if only because the coal-fired power plants, which will be excluded from the system in the coming years, have to be replaced with something right now. Meanwhile, having the atom in the early 2030s is a pipe dream, especially considering where we are today.