Gazprom decided not to book the Yamal pipe, but it doesn’t mean it will abandon it 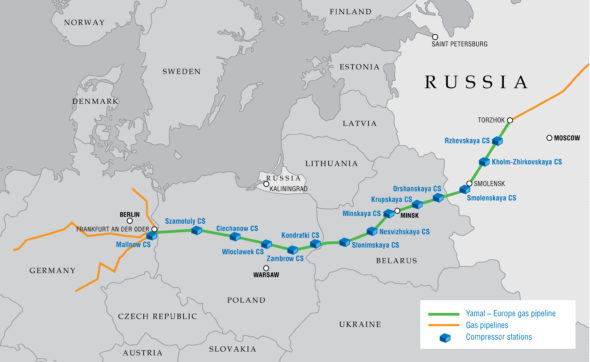 By deciding not to take part in the capacity auction for the Polish section of the Yamal-Europa gas pipeline, for the first time in the history of the pipe the Russian company was not interested in continuing a stable and all year long usage of this route to transport gas to Europe. However, this does not mean that the Russian giant has completely abandoned Poland as a transit country. This is not because of what Gazprom wants, but because of the market – Mariusz Marszałkowski, editor at BiznesAlert.pl, writes.

On the 5th of July, Gaz-System organized annual auctions of the SGT (System of Transmission Gas Pipelines) capacity of the Yamal-Europe gas pipeline from Kondratka on the Polish-Belarusian border to Mallnow on the Polish-German border. The auctions offered a continuous reservation of the gas pipeline capacity for the years 2021-2026, and set the beginning of the gas year as at the 1st of October. To the surprise of many commentators, all of the available bookings remained free, which means Gazprom, as the only entity capable of exporting gas from the east to west decided not to book any capacity. It was the second annual auction for the Yamal-Europe gas pipeline after the long-term transit agreement has expired on the 18th of May 2020. Since that date Gazprom has been obliged to participate in auctions to book the capacity.
The bookings are available for a few periods: yearly, quarterly, monthly, daily and intraday. This model for allocating capacity is in line with the CAM NC EU regulations. Instead of offering exclusive capacity for just one entity, the system provides free access to transmission infrastructure to third parties. Buyers who participate in yearly auctions are always rewarded with a lower transmission price. In case of the other offers, a special “premium” is added. The shorter the booking the higher the rate.

During the first yearly auction organized on the 6th of July 2020, Gazprom was the only participant, although its name was not listed, which booked capacity on the Yamal pipeline. Back then Gaz-System, the operator of the SGT offered a capacity of 34.41 million kWh/h as part of a yearly auction, out of which 34.4 million kWh/h was booked (about 80 mcm a day). During the already closed auction, 90 percent of the pipe’s capacity was offered. The remaining 10 percent was put on offer on quarterly, monthly, daily and intraday auctions.

What are Gazprom’s alternatives?

The fact that Gazprom decided not to book any capacity for the coming gas year, which starts already on the 1st of October, does not mean the company will stop transmitting gas to the West via Poland. A few factors come into play when it comes to this issue.

The first one pertains to the technical possibilities of transmitting gas to Europe. There are five main transmission pipelines Gazprom can use:

1. the Yamal-Europe gas pipeline that runs via Belarus and Poland to Germany. Its capacity is about 34 bcm a year;

2. the Nord Stream gas pipeline on the Baltic Sea bed to Germany, capable of transmitting 55 bcm a year;

3. the Brotherhood and Soyuz pipelines that run across Ukraine to Slovakia/Hungary/Romania with a capacity of 130 bcm a year (contracted as part of a deal signed in 2019 at 40 bcm a year);

4. the Turkish Stream pipeline on the Black Sea seabed to Turkey/the Balkans with a capacity of 32 bcm a year;

5. the Blue Stream on the Black Sea seabed to Turkey with a capacity of 16 bcm a year.

The total capacity of these pipes is close to 270 a year. This is a lot higher than the demand, which in recent years has hovered around 170-201 bcm a year. However, this figure takes into consideration the full capacity of the Ukrainian route, which in the past few years has been systematically marginalized by Gazprom. In 2014 Gazprom still sent between 80 and 100 bcm a year via Ukraine. So, assuming only the contracted 40 bcm will be transmitted until the end of 2024 via Ukraine, the available capacity will be only 177 bcm a year a year. Such a volume will not satisfy the gas demand in Europe during a regular winter season. According to Gazprom’s estimates, this year the company will export about 200 bcm of gas, out of which 10 bcm will flow to China via the Power of Siberia gas pipeline.

This means there will be a 15-20 bcm transmission capacity gap on the market. Since Gazprom does not want to extend transmission agreements with Ukraine, the maximum volume of 40 bcm will go even lower, or maybe will be scrapped completely once the deal expires.

This is where another piece of the puzzle enters the stage – the Nord Stream 2 gas pipeline with an annual capacity of 55 bcm. This volume would be enough to completely bypass Ukraine, but is not enough to cut off the Yamal-Europe gas pipeline. Sitll between 15 and 20 bcm of gas (provided the export is at 190-200 bcm a year) will have to be transported via Poland. In the long-term, Gazprom may want to (and is planning to) build an LNG terminal by the Baltic seaside, which will be used to transport the missing gas with LNG tankers to terminals across Europe. However, before this happens the Russian giant will have to cooperate with Poland, at least to some degree.

Poland will still be important

The fact that Gazprom did not take part in the yearly auction doesn’t mean the company will not book capacity in, e.g. quarterly auctions. Gazprom will have to pay more, because of the premium, but in the context of the fact that is has been lately trying to “gas starve” Europe and thus increase gas prices on the market, while waiting for the Nord Stream 2 to be completed (and launched), the company’s decision not to book the yearly capacity looks like a well thought-out and consistent strategy to blackmail its clients. The unbooked ca. 30 bcm of Yamal’s capacity has caused another nervous reaction on the markets. On Monday, the 5th of July, spot gas prices on the Dutch TTF gas hub went over USD 450 per 1 tcm. This is the highest price since 13 years. It is worth mentioning that about 80 percent of Gazprom’s current export contracts to Europe are based on a market benchmark.

To recapitulate, Gazprom’s recent actions (not booking additional transmission capacity despite the gas deficit in Europe) are a cynical attempt at fighting for its interests and showing Europe where is its place. This is how Russians want to force Europe to support projects such as Nord Stream 2, which in theory are to ensure stable supply to clients. However, this stability is conditional, because if there are political issues with a given client, nothing will stand in the way of Russia stopping the gas supply, despite the fact that the mentioned gas pipelines directly connect Gazrpom to its clients. However, in the long term this will cause a situation where Gazprom will lose its credibility and position as a “stable gas supplier”, and will have to cooperate with Poland irregardless of the fact whether Nord Stream 2 will be completed or not.