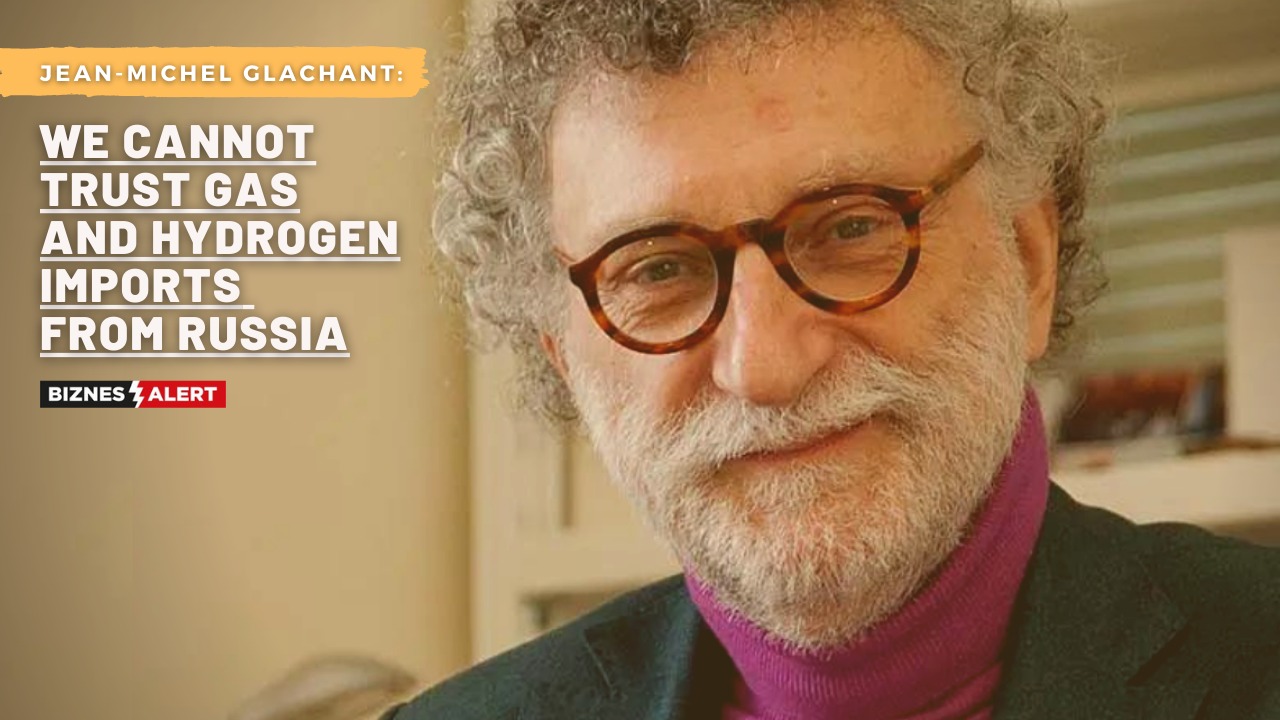 If Russia was not Russia I would trust their government announcements and would say that we need an agreement for hydrogen imports. But we need to remember about Chechnya, Georgia, Crimea, Donbass and many different issues. It is not that I do not want. We cannot blindly trust – Jean-Michel Glachant, Florence School of Regulation chief, said.

BiznesAlert.com: Is there any business case for fossil hydrogen investment in European Union?

Jean-Michel Glachant: New investments will not work because European Union will not recognize fossil based hydrogen as climate friendly. Market for green hydrogen will open this decade. People will produce it and sell in neighborhood. There is no room for new fossil hydrogen.

Some countries argue that blue hydrogen coming from natural gas is needed in face of increasing hydrogen needs in Europe.

You could use Poland and Ukraine infrastructure to get the blue hydrogen but this needs to meet the EU clean standards. If you can respect those requirements it is ok. From 2030-35 those standards will rise and blue hydrogen can become marginalized. Bloomberg released a report in which it says that in 2030 green hydrogen will be competitive. It is a risk for investment in blue hydrogen. Ukraine is a different case. It is willing to use hydrogen for mobility and could use its own standards. For exports to EU it would need to comply with European regulation.

Poland wants to use natural gas as a transition fuel. Polish hydrogen strategy assumes technological neutrality and usage of all kinds of hydrogen? Is it a risk of having lots of stranded assets?

It is inevitable. It is not a crime. All the countries are innovating and do not know where is this path leading us to. Any government could make a mistake by investing in a branch that will not succeed. Poland needs compromise to support coal transition but Germany will exit coal quicker and the tension will be increased in thirties. Another pressure will come from carbon prices. The tension will grow steadily.

Do you think there is a room for any compromise for the sake of such transition period?

You have two pillars of regulations in this dimension. You have national climate and energy plans that needs to be accepted by European Commission and the standards of sustainable investments and green financing. Investors will prefer such enterprises. European Commission is preparing European green financing scheme which is not coming from national level. In between of those two extremes are national recovery plans. Those are billions of euro for recovery and there is a question about Polish plan. It is a fantastic opportunity for Poland to decarbonize and attract innovative energy investment. You have a strong economy, popular workforce respected everywhere. That is why a recovery plan could be a way of setting a new trajectory of Polish economy.

If we promote only green hydrogen, we do not have it enough in European Union.

Calculations from European Commission and our school show that it is impossible to produce 80 mln ton of hydrogen inside Europe. Germany is projecting to produce only 10-15 percent of its needs. Where to import from? Ukraine is a possibility welcomed very warmly. There is also Northern Africa. There is already a project of 40 GW electrolizers in 2038 in this region for 10 bn euro. There are also projects in Middle East, Australia and Chile. Chile wants to export ammonia to decrease costs. Only a handful of people understand what is true and what is pure PR. There are so many innovations that it is hard to predict which technology will succeed.

There is also a Russian option to get hydrogen. Should there be any regulation on hydrogen security of supply in this context?

If Russia was not Russia I would trust their government announcements and would say that we need an agreement for hydrogen imports. But we need to remember about Chechnya, Georgia, Crimea, Donbass and many different issues. It is not that I do not want. We cannot blindly trust. Before reaching any agreement we need to write a red lines: no politics involved, no methane leakage. We should not buy Russian gas because it is a climate enemy because of those disastrous methane leakage emissions measured by satellites. Russia suggests that it will look at methane leakage if European Union agrees on this or that. It is unacceptable. The record shows that Russia is not serious about global warming. Something similar comes in Xinjiang which is the biggest producer of PV materials in the world. In the coming years social and environmental sustainability will be the more popular approach in the West because of president Joe Biden and Germany will to align to this policy.

What about Nord Stream 2?

It is not only bad for Ukraine but for whole Europe. How can we let Nord Stream 2 be built despite our close partner interests? Germany will be obliged to answer to this question and the Greens might only make it more probable.

A deal on Nord Stream 2 is on the horizon