Green trains will roll onto Polish tracks. Europe is already switching to them 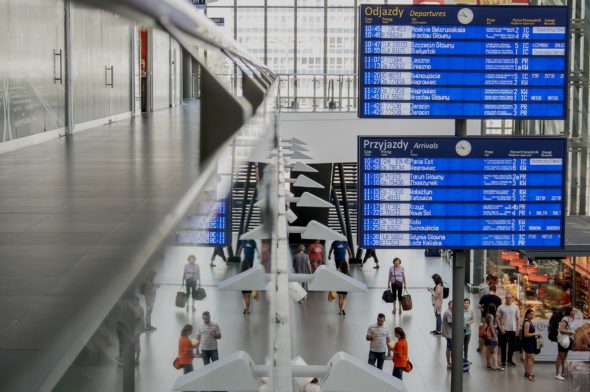 The European Green Deal will focus on limiting transport emissions to a greater degree than before. The European Commission is considering adding this sector to the CO2 emissions trading system – writes Bartłomiej Sawicki, editor at BiznesAlert.pl.

The requirement to limit emissions will encompass railways, which will have to give up on electricity generated with coal. Otherwise Deutsche Bahn will fuel the green railways. The transformation of energy sources is the basic and most important part of the European Green Deal (EGD), the EU climate policy whose goal is to lower GHG emissions. Railway is to be the answer to these challenges.

The European railway network has been already electrified to a large degree. In Poland as well as in Germany almost 60 percent of railway tracks are equipped with electric traction. There are states where this figure sits at 90 percent, or even 100 percent, e.g. Belgium and Switzerland. According to the EU new climate policy and the the European Green Deal, railway is to play a leading role in limiting CO2 emissions in transport.

The European Environment Agency data show that in 2017 the emissions in the EU transport sector increased by 28 percent in comparison to 1990. The goal of the EGD is to reverse that trend. In the subsequent years the level of emissions stabilized. In 2017 transportation was responsible for 27 percent of the total volume of greenhouse gases emissions in the EU-28.

The EC is planning to use the EGD to increase the participation of Europe’s transportation sector in limiting CO2 emissions to counter climate change. Road transport is the biggest source of CO2 emissions in the EU (73 percent), the aviation sector is second (13 percent) and maritime transport comes in third (11 percent). Because of the high degree of electrification, railway transport occupies the fourth place with 1.6 percent. This is why trains will drive the development of transport in the EU. The high level of decarbonization of the power generation sector in Western Europe, will make it possible to deliver even more power generated with renewable energy sources or nuclear energy. However, the situation in Poland is different, as according to 2019 data 74 percent of power in the country is generated with black and brown coal. This is why the railway needs to look for providers that offer energy which generates less emissions, or produce its own green power to take part in the extensive scheme to “railroadize transport” in Europe.

A decade of green railroads in Germany

At the beginning of this year Germany launched a plan to invest EUR 86 billion in its railway. The money will be spent on modernization and expansion of the railroad system. The goal of the investments is to facilitate more eco-friendly transport. The federal government will contribute EUR 62 billion, whereas the state-owned Deutsche Bahn AG will spend EUR 24 billion. The country’s biggest carrier – Deutsche Bahn (DB) – has been providing green energy, generated from renewable sources only, to passenger trains since 2018. Today DB is the biggest consumer of renewable energy in Germany. The company wants to become completely climate neutral by 2050. The overhead contact line is to be powered with green energy at 80 percent by 2030 and at 100 percent by 2038. DB wants to more than halve the emission of GHGs by 2030. It already covers over 57 percent of its demand for renewable energy sources.
France is betting on green railways and hydrogen trains

The railroad giant Alstom, which produces the Pendolino trains, is focusing on hydrogen and energy storage. In February 2020 it received an order to build eleven trains running on batteries. The CO2 reduction targets are making the company switch to producing trains fuelled by batteries and hydrogen. The new investments of Poland’s PKP Intercity should include this kind of transport, especially in the context of the Central Communications Port (CPK), whose bloodstream will be constituted by high-speed rail between Poland’s biggest cities.

SNCF Réseau – the French railway operator – has already collected a total of EUR 5.4 billion, our of which EUR 2.8 billion this year only was acquired as part of the Green Bond program. This latest investment won the company the second place on the French green bonds market and the seventh on the global one. The green obligations were developed to help finance projects that benefit the environment. In 2018 all types of this credit was worth USD 167.3 billion in total. The previous record for the longest green obligations belonged to Energias de Portugal (EDP) and Energie Baden-Wuerttemberg (EnBW) which had a 60-year maturity, but SNCF Réseau almost doubled that.

Last autumn, DB signed a contract with Innogy and RWE Supply & Trading for the delivery of green energy from the Nordsee Ost offshore wind farm. The contract will apply from 2024 and will be in force for five years. 25 MW will be delivered, which is the equivalent of four wind turbines. The energy that will reach the German carrier constitutes eight percent of the total production of the farm, which has 48 turbines of a total capacity of 295 MW. This agreement is the first corporate contract in the form of a power purchase agreement (PPA) that pertains to energy from offshore wind farms in Germany. By 2030 Poland wants its offshore wind farms to generate 4.6 GW. The PPAs are also signed in Poland by large companies such as Mercedes-Benz and Ikea. PKP could use similar mechanisms.

The Rail Industry Decarbonisation Taskforce in Great Britain wants railroad companies to present plans on how they will achieve mid- and long-term decarbonization goals, that will include profitable electrification and introduction of batteries and hydrogen in areas where they will work best. The team claims that in the coming years over 3000 vehicles used in passenger trains with diesel engines will have to be replaced or rebuilt. For many of those the operating authorisation term is running out. 2400 trains can run on hydrogen or batteries, depending on the level of electrification.

Poland is not sitting idly

The Polish railway industry is coming up with increasingly advanced plans to transition to renewable energy. The thinking is done by the Center for Rail Energy Efficiency (CEEK), whose members include almost a hundred railway entities. The Center contributed to drafting the “Green Rail” program. According to the scheme, by 2030 it could be possible to power 85 percent of the Polish trains with renewable sources. CEEK estimated that the program could boost investments in renewable energy sources worth PLN 6-10 billion within 15 years. PKP Energetyka, the company that powers Polish railways, is the integrator of the proposed solution.

At this point 90 percent of passenger and cargo carriage takes place with the usage of electric traction, but 91 percent of the power is generated with conventional sources. “The energy that goes into the electric traction should come from renewable sources – this is a huge challenge, but at the same time a way to make the railway more competitive on the market. We need 10 years to develop a supply system, which will run on renewable energy sources at 85 percent,” Leszek Hołda, vice-chairman of the CEEK presidium of the advisory council and member of the PKP Energetyka management board, said in an interview with BiznesAlert.pl.

“The wide availability of technological solutions that allow generating energy from renewables and falling investment costs for these solutions, create a situation where renewables may become a real alternative when it comes to the transition of energy sources that fuel the railroad and reduction of costs of energy purchases,” Adam Laskowski, PKP Intercity board member, stated. Without a green railway, this kind of transport may suffer due to EU climate policy.

The railway sector is planning to limit energy consumption by 1.2 TWh by 2030, and thus limit CO2 emissions by one million tons. This is CEEK’s main goal. CEEK has three goals. The first one is to maximize the recovery of breaking energy in trains. The second one is to promote ecodriving. Experts stress that the way a train is operated by the driver has a significant impact on the amount of used energy. Third, CEEK is talking about using the areas and buildings owned by the railway to construct PV installations so that, e.g. railway infrastructure could be self-sufficient when it comes to energy. These actions are very significant, because all CEEK members support the development of a green railway and they provide 94 percent of rides that take place in Poland.

The biggest passenger carrier in Poland – PKP Intercity – believes that the wide range of technological solutions in renewables and the dropping investment costs, make renewables a good option for transitioning the sources of power for the railway and reducing the costs of purchasing electricity.

The German company DB Cargo, which is present on the Polish market, believes that the carbon footprint in cargo services is five times smaller than in case of trucks, while the external costs (aka social costs) are among the lowest. “At this point 85 percent of our freight services is provided with a fleet running on electricity. Our locomotives are equipped with an advanced drive control system, which enables the recovery of power. In alternating current systems, a hundred percent of the electricity captured during braking, may be returned to the grid. Additionally, thanks to special anti-lock braking systems we eliminated the slippage during start-up and braking, which significantly reduced power consumption. As of 2018 we lowered the amount of fuel used by our diesel rolling stock by 9.7 percent in comparison to 2016,” Robert Nowakowski from the DB Cargo Polska management board, said.

“The railway network in Poland received significant financing only 5-6 years ago, which means it is still facing many challenges, but when taking a very realistic look back, I am in awe of the huge civilizational leap taken during the last decade. I am sure that sooner or later we will also make up our inadequacies, when it comes to environmentally friendly solutions,” Robert Nowakowski explained.

Electromobility is not a rocket science. Polish car in four years’ time (INTERVIEW)
Infrastructure / Innovations
In December 2017, a start-up from Sweden presented Uniti One – a small original electric car. The sale of the car is to start in 2019. We talked […]
More

Three Seas Initiative is not against integration, it is for it (coverage)
Energy Infrastructure / Innovations
During the Atlantic Council PISM Global Forum 2017 in Warsaw the President of Croatia announced that the 3Seas countries would ask the European […]
More

Nord Stream 2 allies now armed with a new environmental argument
Infrastructure / Innovations Nord Stream 2
A journalists’ visit to Lubmin where the Nord Stream pipeline ends its journey from Russia and reaches Germany, was an opportunity to discuss […]
More