Jakóbik: The next gas crisis may be the last (ANALYSIS) 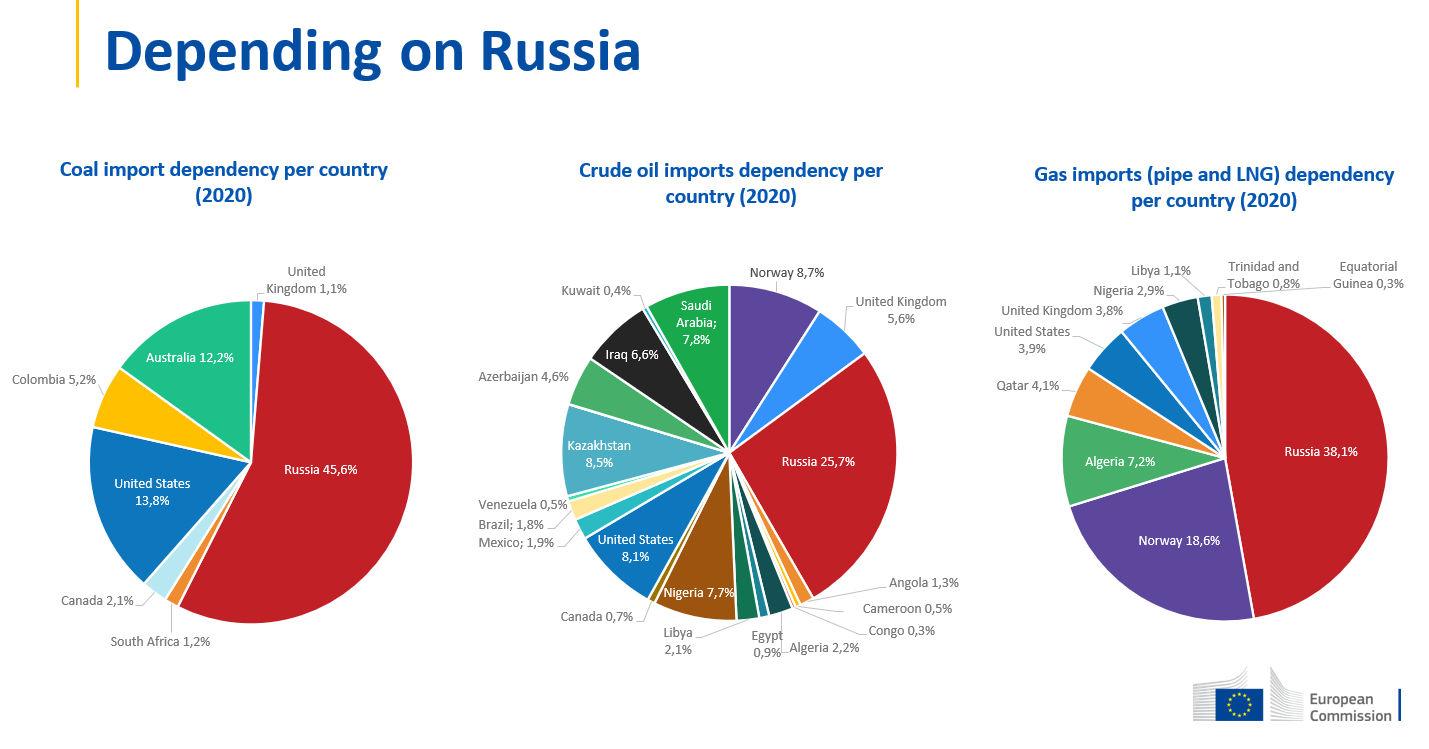 The Russians may be cooking a new gas crisis for Europe in May, but it will probably be the last one in history, because the Old Continent is to become independent of Russia’s fossil fuels. It is only a matter of time and political will, as follows from the European Commission’s REPowerEU plan – writes Wojciech Jakóbik, editor-in-chief at BiznesAlert.pl.

Another gas crisis in May?

The dispute over payments in rubles for Russian gas may lead to a reduction or interruption of gas supply to the European Union. A decree issued by President Vladimir Putin obliges Gazprom’s customers to make payments to Gazpromank’s sub-accounts. The bank will then exchange the dollars or euros to rubles. This solution has been criticized by the European Commission as a possible violation of sanctions against Russia, and its Central Bank. “At this point the most realistic scenario is that if not all, then at least some customers of Gazprom will refuse to pay in rubles, leading to a supply disruption in early May,” the Kommersant daily wrote. The newspaper reminds that when it comes to a large number of contracts the prepayments for April deliveries need to be made by 15 April. The Kommersant argues that Gazprom customers have five days to pay for the invoice, and then a period of five to seven days to settle possible arrears before deliveries are halted. “For example, this is what Gazprom did in May 2014 when it stopped supplying gas to Ukraine’s Naftogaz, as it stopped paying. Therefore, if one of the European customers does not transfer the prepayment in mid-April, the supply may be interrupted in early May,” the Russian newspaper explained. It also reminded that under Putin’s decree it is the Federal Customs Service that supervises payments, not Gazprom, which means it will be responsible for stopping the supply. So far, however, the governments of individual European countries such as Poland, the Netherlands or Germany, refused to pay in rubles. While Slovakia and Hungary said they were ready to meet this requirement. There is a discussion about the EU embargo on Russian raw materials, which so far does not involve a ban on the import of gas from Gazprom. Possible problems with the rubles for gas deal may occur in May, when the deadline to pay for the April deliveries will expire, including, for the Polish PGNiG, as well as other players on the European market. This means that a possible gas supply crisis caused by Russia can at most lead to a faster abandonment of this source of import by European countries, which so far have not wanted to do it right away, an example of which is Germany, which declared it could phase out Russian gas as late as in 2024 due to contractual obligations. If Gazprom ceases to comply with them in May, the company itself will give an argument for the termination of the agreement. If the Russians do not decide to take such a step towards the countries of the European Union, they may provoke a “small” gas crisis in Moldova, which is struggling with prepayments for Russian gas and is regularly threatened with a supply cut that could occur in May.

Independence from Russia is a matter of time and will

The REPowerEU program, presented on March 8, 2022, aims to make Europe independent of fossil fuels from Russia, with gas in the lead, in response to the attack on Ukraine. According to the European Commission, in 2020 the European Union imported 45.6 percent of coal, 38.1 percent of natural gas and 25.7 percent of oil from Russia. Since the coal and oil markets are fully fledged it is relatively easy to abandon the Russian direction. It is for this reason that the European Commission has imposed an embargo on Russian coal as part of the fifth package of sanctions against Russia, and at the time of publication of this text, is considering similar restrictions on oil from this country. The abandonment of gas from Russia at the EU level for the time being is the least likely. Sanctions, on the other hand, are an ad hoc solution that can be withdrawn in the event of political changes in Russia. In the long term, Europe wants to abandon raw materials from Russia by designing a common energy and climate policy. The EU’s REPower EU programme for kicking Russian fossil fuels is a long-term plan similar to climate policy objectives. However, it proposes short- and medium-term solutions to reduce the continent’s dependence on Russia.

The medium-term solution is to reduce Russian gas imports by 2/3 by the end of 2022 and to zero by 2030 at the latest. These EU objectives are similar to the climate ones (increase in energy efficiency, share of renewable energy sources, decrease in CO2 emissions). The abandonment of Russian gas therefore takes the form of another objective to be measured and verified. The gas market is less developed due to its high dependence on a single supplier and the formula of cooperation imposed by it in a manner inconsistent with EU rules, as demonstrated by the Commission’s first antitrust investigation and the fact that the second one has already started. The high dependence of some countries of the European Union, with Austria in the lead, then Germany and Hungary, makes it impossible to abandon Russian gas immediately. Other countries like Poland and Lithuania can do it now. This is because they pursued a policy of diversification of gas supplies, which, however, was not accounted for according to the objectives that are now introduced by REPowerEU. The SOS security of supply regulation introduced the N + 1 factor, which requires that each gas transmission system must be prepared for safe operation in the event of a single source supply interruption. This solution is not enough in view of Gazprom’s latest game, in which the company has reduced gas deliveries to Europe since the summer of 2021, completely undermining the N+1 rule. According to it, alternative routes would supply the market with gas thanks to its liquidity. The Russians undermined it on the eve of the attack on Ukraine, and one could risk saying that it was part of their preparation for the war.

The medium-term solutions proposed by the European Commission under the REPowerEU programme include gas supply diversification, and increase in the share of renewables where gas is the main source of power and heat. The first element involves deliveries from outside Russia with the help of gas pipelines and LNG terminals, the development of the use of hydrogen and biomethane, that is, renewable gases, which are expected to yield 60, 10 and 17 billion cubic meters, respectively by the end of 2022. The second element is the development of RES, which will include rooftop installations, heat pumps, the use of hydrogen in industry, its electrification, and the acceleration of the development of renewable energy. This is to be made possible through insulation programs for buildings, speeding up the administrative processes for RES and the construction of strategic energy infrastructure between the member states in the Iberian Peninsula and the Balkans, as well as the synchronisation of the Baltic states’ transmission networks.

The long-term plans provide for the creation of strategic gas reserves and a change in the functioning of the energy market in order to overcome the crisis. By the end of March, emergency solutions were supposed to have been presented to reduce the energy crisis, including by partially limiting price increases (even a price cap is on the table), allowing public aid in the industrial sector and taxing additional the revenue of energy companies for record prices of raw materials, i.e. windfall profits. The European Commission has also put forward a policy for the management of gas storage facilities in Europe, which foresees that by the end of September each year they will be 90 percent full and 80 percent full in 2022, probably due to the restriction of supply by Russia’s Gazprom. The goal is to publish in mid-May the plans for a reform of the energy market, which will change its structure to make decarbonization of the energy sector easier. Then a proposal on including in the REPowerEU a postulate to abandon Russian fossil fuels by 2027, will also be put forward. The Commission’s key conclusion is that energy prices in Europe are dependent on the price of gas due to the high use of this fuel in the electricity sector of the western part of the continent, as evidenced by the price convergence between energy and gas, which is particularly evident during the energy crisis. The European Commission wants to break this dependency, and REPowerEU is the tool to do it. It is therefore a matter of time and political will of the European states.

The fight against the energy crisis is already underway

The European Commission proposes to make gas storage strategic energy infrastructure, which will allow it to apply for subsidies and special protection. This is a green light to subsidize gas purchases, in Poland through the Government Agency For Strategic Reserves, which is responsible for stockpiling. I recommended such a solution in my text on the war economy. The Commission is also proposing loans for entrepreneurs who found themselves in a state force majeure due to the energy crisis. Taxing the windfall profits serves precisely this goal. This solution may be particularly controversial in Poland, where state-owned energy companies have record results in times of crisis due to high commodity prices. The International Energy Agency has calculated that such a tax would allow to collect up to EUR 200 billion in 2022, which would be used to reduce the impact of the crisis on the poorest. From this point of view, it would also be important to ensure financing to develop the electricity grid, which is necessary due to the fast-paced growth of renewable energy. Money is also needed to secure the baseload, i.e. prolong the lifespan of coal-fired generation for the necessary several years, and to stop denuclearization in the Germanic countries, which results in increased gas generation. This is another argument for limiting gas consumption in the energy and heating sectors in the next heating season and offering protective mechanisms for the poorest.

The metaphorical closure of Putin’s petrol station, which means making Europe independent of his raw materials, is therefore a matter of time and political will, which should not be lacking in the face of Russia’s attack on Ukraine. The quicker the process, the fewer victims the Kremlin will claim, but in the long-term it has already lost, because the energy crisis from 2021-22 woke Europe up, just like the 1970s oil crisis. If the Russian gas crisis erupts in May, it may be the last one in history, because soon the old continent’s dependence on gas from Russia will end.