Kemfert: We do not need an “eco-dictatorship”, we need “eco-democracy” (INTERVIEW) 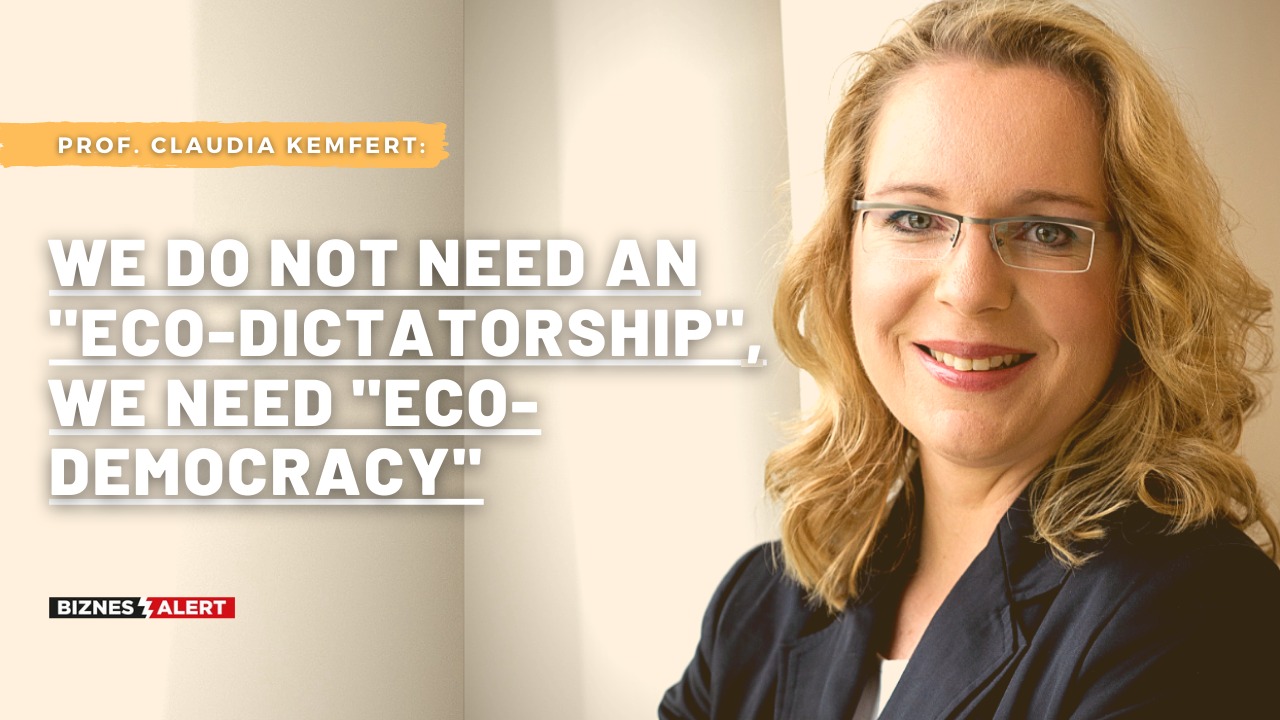 In an interview with BiznesAlert.pl, professor Claudia Kemfert from Deutsches Institut für Wirtschaftsforschung think tank talks about the challenges standing before Germany’s energy transition, a.k.a. Energiewende.

BiznesAlert.pl: Germany wants to completely phase out nuclear power by the end of next year, whereas Poland is only beginning to plan its first nuclear power plant. What role should nuclear energy play in the European energy mix?

Professor Claudia Kemfert: Nuclear power will play a small role, because its participation will be dropping mostly due to costs, safety and political issues. Atomic energy is very expensive in comparison to renewable sources.

As part of its energy transition Germany wants to eliminate nuclear power and coal and instead invest in hydrogen generation. Should the European Union focus on green hydrogen only, or should other sources of this gas, apart from renewables, be admissible as well?

Hydrogen should only be produced from green energy sources. Since generation of hydrogen is very energy-intensive, producing it from fossil fuels generates greenhouse gases. This goes against climate goals.

Washington has imposed new sanctions on the controversial Nord Stream 2 gas pipeline. How will they impact Germany’s energy sector and relations with the U.S. under Joe Biden?

The new administration in America will most probably maintain the sanctions against Nord Stream 2. The gas pipeline is not profitable and goes against our climate goals and the energy sector transition. Germany should bury this project, or at least stop supporting it.

The profit from the levy on energy consumers that subsidizes renewable energy investments (EEG-Umlage-ed.) was record-high last year. How should these funds be invested to achieve energy transition?

Renewable energy is becoming increasingly cheaper and in the future it will be able to function without subsidies, provided that the market conditions improve, barriers for the development of renewable energy sources are abolished and conventional energy generation is abandoned.

Eric Heymann from Deutsche Bank Research wrote in his recent analysis that for the EU to achieve climate neutrality by 2050, we would need a some kind of an “eco-dictatorship”, which would entail changes in our lifestyle to lower our impact on the environment. Do you agree with his opinion?

On the contrary, we need more democracy to achieve climate goals, because climate protection is a civic initiative, it’s about participation and being oriented towards the citizen. We need to say goodbye to the dictatorship of fossil fuels and strengthen democracy through renewable energy sources. In my book “Fridays For Future” I devote an entire chapter to explaining why we do not need an “eco-dictatorship”, but an “eco-democracy”.

Buzek: Revision of the SOS regulation marks the end of concerns over gas supply security […]
Energy
On Tuesday 12 September, the European Parliament adopted regulations on the security of gas deliveries at first reading. According to the press […]
More

U.S. LNG delivery to Poland cheaper than gas from Russia and German market
Energy LNG
An interview with Maciej Woźniak, PGNiG’s Vice-President of the Management Board for Trade. He explains the benefits that the LNG terminal in […]
More