Kurtyka: Nuclear power is a response to old and new energy challenges (INTERVIEW) 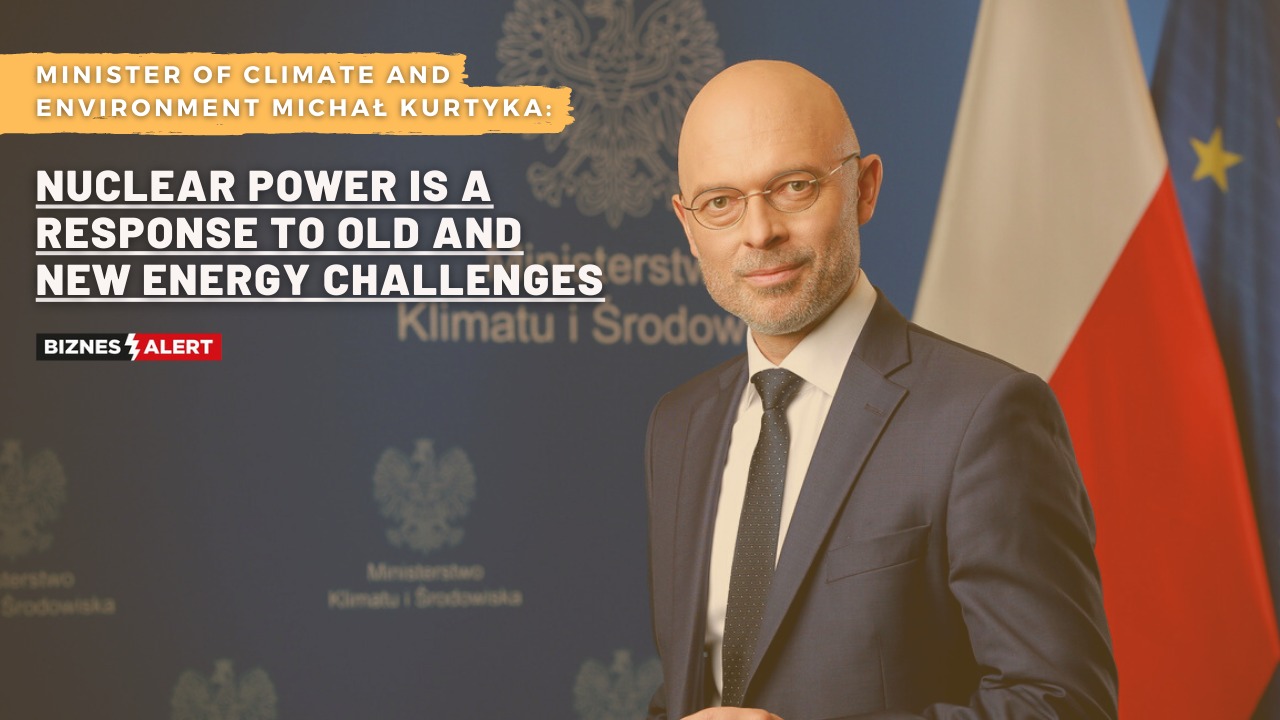 Nuclear energy responds to the challenges of the old and new paradigm of security – says Michał Kurtyka the Minister of Climate and Environment in an interview with BiznesAlert.pl.

BiznesAlert.pl: What is the goal of the alliance of the ten EU states that support nuclear power?

Michał Kurtyka: Poland has decided to join this alliance. It is absolutely critical to think of nuclear energy as the only zero-emission source that guarantees the predictability and stability of energy prices. In the current context of rising prices, nuclear energy is taking on a new dimension. Once such a source appears, energy prices will be stable. The fight is taking place, because the atom is controversial in Europe, e.g. in Austria and Germany. We are of the opinion that the atom must be included in the financing approved by the Commission, that is, in the taxonomy. I spoke to the French Economy Minister on Friday. We agreed that we would fight for nuclear energy, that we needed a broad coalition of partners. I am pleased that 10 countries have signed the letter, as they recognize that the future of the energy industry in the European Union depends on the construction of specific nuclear energy projects, because reactors are, or will be built in these countries. In this context, this coalition is essential to win the delegated act, because in the fall the Commission will prepare a draft supplementary act to the regulation on the taxonomy. We’re fighting for the next iteration to include the atom.

Why does Poland care?

It is important, because it will let banks qualify the financing of nuclear power as a green and sustainable source. It’s about the ESG rating for the banking sector. It is not about EU funding, because we do not count on it in Poland. Undoubtedly, any major project will require debt financing. Banks must have guarantees that nuclear financing will meet the ESG criteria. For us, this is obvious, but it is still the subject of a far-reaching dispute. We decided to discuss it in the biggest newspapers. The letter titled “Why us Europeans should treat nuclear energy on an equal footing with other low-carbon sources” was published in several newspapers, such as Le Figaro, Die Welt and the Financial Times.

What are the arguments for including the atom in the energy mix?

The conventional paradigm of energy security to date has been to protect against fluctuations in commodity prices and access to them. The paradigm of the new energy industry based on intermittent sources, is about building security when there is no wind and no sunshine. Nuclear energy responds to the challenges of the old and new security paradigms. It secures access to competitive and stable energy regardless of fluctuations in commodity prices. It is a zero-emission source that we can always count on. Such sources should be developed in Poland, because they are crucial on the path of energy transformation. We also believe that if it does not increase its presence in European countries and around the world, it will be very difficult to achieve the Paris agreement goals rationally. This has been very clearly confirmed in an IPCC report.

In contrast, Germany talks about the denuclearization of Europe…

Each country has the right to build its energy security on the basis of its own assessment of the situation. We will stick to our guns, as I see no reason for us to change our minds.

A nuclear race for the undecided client in Poland
Energy Nuclear
Americans and the French are preparing offers to build nuclear power plants in Poland. Lurking in the shadows are Koreans who have also declared they […]
More