Kurtyka: Polish energy strategy with nuclear power can be a good example for others (INTERVIEW) 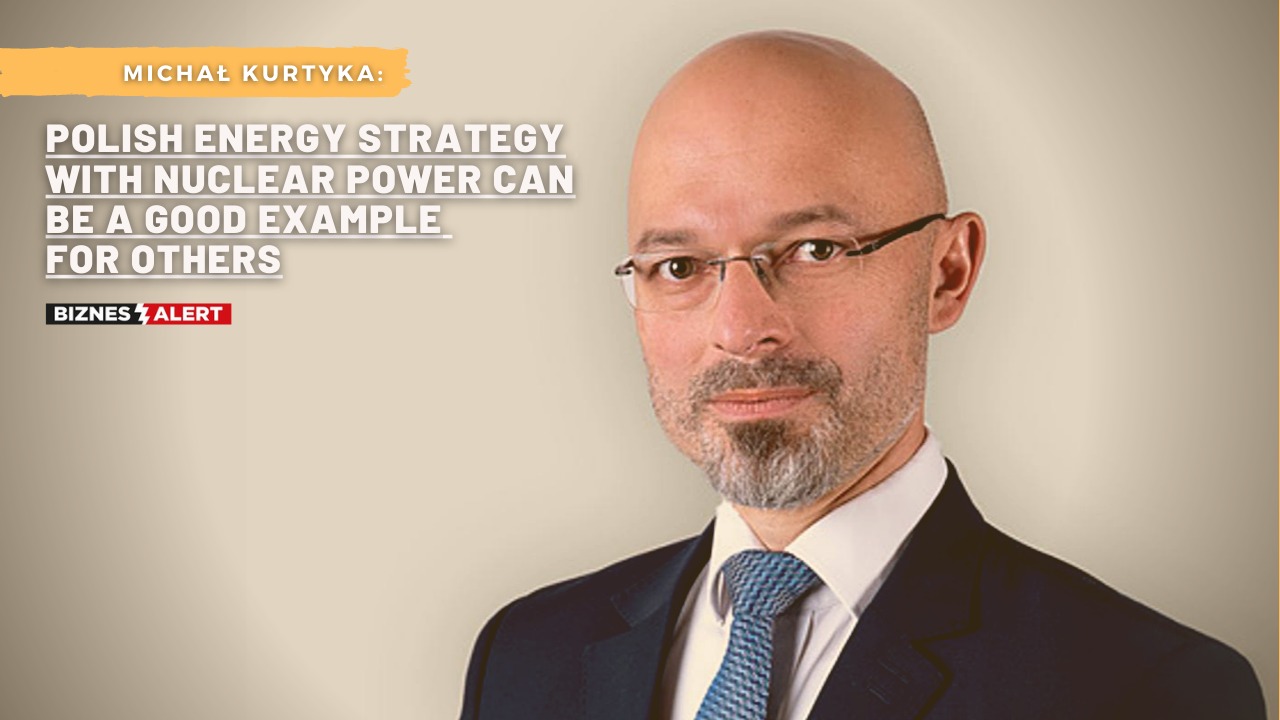 “I am sure that developing nuclear energy in Poland as a stable foundation is the right way to respond to future trends,” Michał Kurtyka, Minster of Climate and Environment, says in an interview with BiznesAlert.pl. “I hope that the way we will conduct the energy transition will become a model for others to follow,” the minister adds.

BiznesAlert.pl: What is the Polish recipe for the energy transition? What will be the importance of nuclear power in Poland’s Energy Policy by 2040 in relation to the discussion in the EU on whether or not this source of power supports the climate policy?

Michał Kurtyka: We are dealing with a breakthrough in thinking about energy. In 2009 nobody was even thinking about offshore wind energy, a ten-fold drop in PV costs, the surge of e-mobility and electric cars registrations overtaking diesel cars in Europe. That was when Poland’s Energy Policy by 2030 was drafted. The technological transition is accelerating, but the foundations remain the same. Those include the need to ensure a stable energy supply and a profile of generation units that will correspond with the consumption profile. The booming renewable energy has to be balanced. To this end we may use gas, and this is where the RES and gas team comes in. It offers stability, but is not a zero-emission solution. Nuclear power is another option. I am sure that developing nuclear energy in Poland as a stable foundation is the right way to respond to future trends, such as the growing demand for zero-emission energy among companies. Increasing numbers of companies want energy from low-emission sources, because that’s what clients want. Another trend is the need to ensure cheap energy for industry. We have the scientific and business potential to develop nuclear power, which introduces high quality standards, as well as culture and rigour in industry, which make it increasingly competitive as time goes by.
How will nuclear power impact electricity prices?

After the initial, expensive phase of investment, a nuclear power plant offers cheap energy, if not increasingly cheap. Today, the cheapest energy in the world is generated at old NPPs and hydro power plants. Finland’s nuclear power plants generate energy for 17 euro per MWh. An amortized NPP may operate for 60, or maybe even 100 years providing a stable source of energy, which is attractive from the point of view of its impact on the environment. A coal-fired power plant needs 200 freight wagons of coal a day. These costs are usually not taken into consideration. An NPP needs two truckloads of uranium a year.

Public aid for nuclear power has to be approved by the European Commission. Whereas the EU taxonomy may exclude nuclear power. How will Poland handle this problem?

The EU is still talking about the taxonomy. This name is vague, but it’s about on what investments financial institutions will be allowed to spend money from the point of view of their impact on the environment. This discussion wouldn’t be happening if only facts were taken into consideration. Nuclear power doesn’t generate any emissions, its impact on the environment is minimal in comparison to conventional power sources, but it makes our western neighbor nervous. This issue, just like the problem of gas supply sources, is a bone of contention. The discussion on climate neutrality is moving forward, and a realistic approach to all technologies without the apriori rejection of any options is shared by a growing number of member states. This is why ministers responsible for the environment from Poland, France and a few other states in the region, wrote a letter in defence of nuclear power as a tool of climate policy. So far the French have been reserved, but currently they share our conviction that it is impossible to be realistic about energy transition without nuclear power. New stakeholders who support nuclear power and who until now were not part of the conversation are joining the ranks. It is worth acknowledging the pre-election declaration made by the Dutch prime minister, who stated the country would start investing in nuclear power plants to implement the climate policy. This is in line with the findings of the IPCC, which scientifically determined that it would be impossible to achieve climate neutrality without maintaining, and even increasing the participation of nuclear power.

Poles will invest in large-scale state-owned energy industry. How much room will be left for decentralized renewable energy?

The discussion on various sources of energy is often perceived on a superficial level. Various energy technologies have different applications. PV makes it possible to flatten the peak energy demand in August, which has replaced the traditional peak in the winter, we knew back in the communist times. The role of AC, with which solar energy is well correlated, is growing. However, decentralized renewable energy will not ensure a stable supply to industry, which is why we need nuclear power. Let’s compare this to the transportation sector – we cannot say we should not build railways, because we have a big network of roads or bike lanes. This statement would sound rather ridiculous, just like in case of the energy industry. The Polish sector needs a large-scale energy industry, which is less flexible, but stable, as well as decentralized power generation, which is more flexible and closer to the citizen. Each of those approaches has its pros and cons. They complement each other. We want to diversify the energy mix. We are entering the energy transition as a coal monoculture. Every monoculture is at risk of a shock. Diversification offers a better response to them.

Is Poland able to implement mega-projects, such as the LNG terminal, or the planned nuclear plants and offshore?

These investments are huge and fit our aspirations. Our economy ranks 20th in the world, and it is growing despite the coronavirus pandemic. Our industry has an export surplus. New investments are coming to our country. To grow, we need a tailored Energy Policy, which will allow Poland to join the race for the latest climate neutral technologies. The biggest powers across the world – the US, China, Japan, Germany – are already taking part in it. This is an opportunity to develop our technologies, supply chains, earn gigantic money and create many jobs. We already have examples of this. In 2017 we had a 10 percent market share in electric buses in the European Union, today that figure is at 46 percent. Last year we produced EUR 3 billion worth of lithium-ion cells, and we were the biggest manufacturer in Europe. The LNG terminal shows we are capable of implementing large-scale investments despite political changes, because they are necessary. The projects included in our energy strategy will be enhancing our energy independence in the 2030s, as well as our industrial potential and competitiveness. I hope that the way we will conduct the energy transition will become a model for others to follow.