Majewski: PGNiG will present the new strategy either on its own or as part of a multi-energy concern (INTERVIEW) 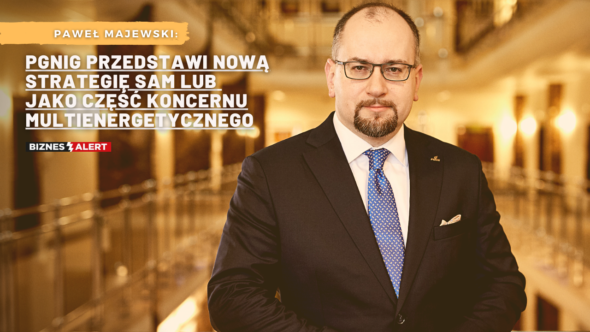 “Instead of changing the existing strategy, we are working on a new, comprehensive and long-term plan, which we will announce before the current one expires, either as the PGNiG Capital Group or as part of a multi-energy concern,” Paweł Majewski, PGNiG CEO says in an interview with BiznesAlert.pl.

BiznesAlert.pl: How would you sum up 2020 from PGNiG’s point of view, especially in the context of the pandemic?

Paweł Majewski: The crisis caused by the COVID-19 pandemic was definitely less severe for the PGNiG Capital Group than for other businesses, one of the reasons is that its impact on gas consumption has been limited. A stable financial situation allowed us to focus on our key role, which is to maintain the continuity of supply to our consumers, and we were also able to help those in need.

Managing a business in the current macroeconomic situation involves certain limitations. Our sector has to deal with the price fluctuations of natural resources. We operate across a few segments, the Capital Group also has a number of companies that offer services to other companies on the market. This diversification ensures we have a solid foundation and a safety buffer. This is visible in the financial and operating results, that we achieved in 2020. A profit of over PLN 7.3 billion, PLN 13 billion EBITDA and PLN 39 billion of sales revenue. This allows us to continue to strengthen our position and pursue ambitious goals and projects. Winning the price dispute with Gazprom and receiving the overpayment definitely had a big impact on PGNiG’s 2020 financial results. While this was a one-time occurrence, the Arbitration Court’s decision to introduce a new price formula as part of the Yamal contract, improved our commercial activity permanently, which will impact our results in the coming quarters. This is good news, because natural gas will remain part of the economy for years to come. Forecasts show that the demand for this raw resource will go up and its role in the energy transition, and in the projects implemented by PGNiG, is of key importance.

How many licenses on the Norwegian Continental Shelf does PGNiG currently hold? What will be their importance in using the capacity of the Baltic Pipe gas pipeline?

Currently PGNiG Upstream Norway has 36 licenses on the Norwegian Continental Shelf. We extract oil and gas from nine fields and were are investing in and researching another six. In 2020 we made a significant discovery at, among others, the Warka field, we also purchased shares in the lve Nord, Duva, Gina Krog, Kvitebjørn and Valemon deposits. According to the Wittemann E&P Consulting agency, last year the PGNiG capital group was one of the most prominent players when it comes to transactions in the region. At the end of March we signed a conditional agreement on purchasing the assets of INEOS E&P Norge AS. This will allow us to tap into more hydrocarbons on the Norwegian Continental Shelf. One of the assets we are taking over is the Ormen Lange deposit, which is the second biggest gas field in Norway which should last until 2045. The transaction with INEOS may increase the volume of natural gas production by PGNiG Upstream Norway by 1.5 bcm a year in the next five years. This brings us a lot closer to achieving one of our strategic goals, which is to ensure a diversified gas supply to Poland after 2022. The mentioned Baltic Pipe will play an important role in this process. Of course, we want to transmit as much of our own gas as possible and the recent purchases will help us in achieving this goal.

What about Nord Stream 2? If, in spite of everything this gas pipeline will be finished and will transmit Russian gas, will it be a threat to Poland, our energy and political security and cooperation with Ukraine?

Since the works on Nord Stream 2 have started, PGNiG has been loud and clear about the negative impact this project would have on the gas supply market in Central and Eastern Europe. We indicated this was the case in formal proceedings and we also presented our position on this issue to, among others, the President of Poland’s Office of Competition and Consumer Protection, and we maintain it. This is because PGNiG’s priority is to ensure our country’s energy security. This is why we are increasing the number of partners from whom we buy gas, and we are investing in our own production both in Poland and abroad. The fact that we are growing the number of gas deposits available for PGNiG does not necessarily mean that we will completely give up on acquiring gas from the east. This gives us more comfort and ability to choose. Additionally, diversification and deliberate integration of the gas transmission systems in Central and Eastern Europe enhances the cooperation between the countries of the region and reinforces their energy security.

What about the OPAL gas pipeline?

The opinion issued by the TSUE Advocate General on the European Commission’s decision confirmed that all kinds of exceptions or lack of balance when it comes to the interest of member states go against the principle of energy solidarity. Together with the Polish government we raised this issue already a couple of years ago. It doesn’t matter if we are talking about the OPAL gas pipeline or about other elements of the transmission infrastructure, their monopolization poses a risk for the proper functioning of the EU gas market. The TSUE Advocate General’s opinion is important for the Court’s ruling, but it is not binding. We are waiting for this case to be decided.

Which PGNiG investments in the hydrogen sector will be especially important and at what stage are they?

Thanks to PGNiG’s experience and infrastructure, developing alternative gas fuels is the logical path to take to meet the challenges posed by the European Green Deal. Also, this is why hydrogen holds an important place in our future plans. In this case we will focus mostly on projects related to the distribution and storage of this green fuel. We are planning to build an installation at our facility in Odolanów to test the impact of various blends of natural gas and hydrogen on gas-consuming appliances and gas pipelines. This will allow us to come up with the right proportions for a blend that in the future could be pumped into our distribution network. The second project pertains to the usage of underground cavern gas storage. We will conduct research in smaller caverns to see whether hydrogen could be stored there.

This fuel can be an energy carrier that offers a wide range of use, which is why developing hydrogen technologies is an investment in the future and an important step on our way to climate neutrality.

What role does PGNiG’s hydrogen program play in the European Union’s strategy?

The EU is very engaged in promoting hydrogen projects. According to the directive on renewable energy sources, the participation of hydrogen in the final consumption of green energy at the end of 2030 should be at 30 percent. Last July the European Commission adopted the hydrogen strategy, which emphasized the importance of green hydrogen generation. PGNiG is mostly focused on large-scale storage and distribution of this gas, without which it is difficult to talk about building a hydrogen economy. We participate in the European Clean Hydrogen Alliance (ECH2A), which supports the creation of an economy based on clean hydrogen. The Alliance allows us to exchange knowledge and experience with other energy companies, as well as firms from other industries, which is especially important for our research projects. Most of all, it allows us to actively participate in creating EU regulations that will impact our domestic energy transition.

It’s been announced that Poland’s antitrust authority will verify the takeover of PGNiG by Orlen, which means the process may take less time than if the European Commission was involved. Did this impact PGNiG’s decision not to update its strategy?

I believe that Poland needs to have its own multi-energy company. Once we join our forces we will have it easier to bear the costs of the energy transition, which is to make the European Union a climate neutral place in 2050. Not only our, but all EU economies must go through this process. In order to have a good standing on the market, we have to have an entity that is able to successfully compete with the biggest players. I think that today nobody doubts that capital does have a nationality and if we want to ensure our energy security for years to come, we have to base it on ours.

However, the intention expressed in the joint letter by the Ministry of State Assets and PKN Orlen does not, or even should not have any impact on our decision to not update the Capital Group’s strategy at this stage of the work on the takeover. We will not change the Green Deal, but we may prepare for it better or worse. We want to be prepared better. This is why in order to continue to develop we don’t have to change or improve our current strategy. This gives us space to act in the next two years. It is based on a few pillars, but it has one goal: a better future. Both for us and for our clients.

The situation on the market and around the world shows that the assumptions, goals and decisions change not every year, not every month, but from day to day. At the same time the regulatory updates at the EU and national level will have a major impact on the energy sector in the mid- and long-term perspective. The Polish Energy Policy until 2040 has been announced only recently, but the government still needs to adopt a number of important documents, e.g. the hydrogen or methane strategies. We are also waiting for the legal instruments of the EU climate and energy policy to be updated, including the amendments to the EU ETS directive, the RES directive, the revision of the Third Gas Package, or the taxonomy that determines the rules for deciding whether an investment is environmentally sustainable. We are also hoping that natural gas will be designated as a fuel important for energy transition.

So, instead of changing the existing strategy, we are working on a new, comprehensive and long-term plan, which we will announce before the current one expires, either as the PGNiG Capital Group or as part of a multi-energy concern.

PGNiG: “Digital Field” will boost the efficiency of oil and gas production
GAS
Polskie Górnictwo Naftowe i Gazownictwo has developed the Integrated Field Management System which will optimise the Company’s production […]
More