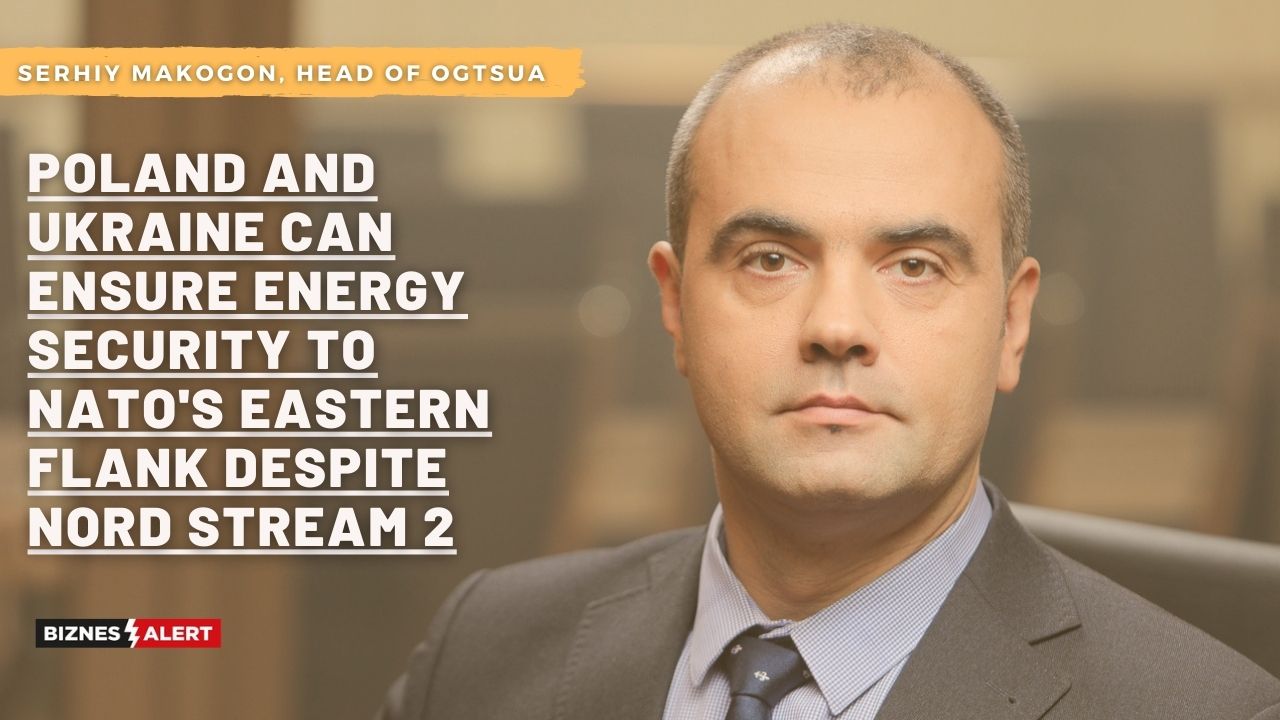 – Thanks to access to the Trans-Balkan gas pipeline, Poland and Ukraine can create a powerful North-South gas corridor that will ensure energy security for the entire South-Eastern Europe, i.e. NATO’s Eastern flank, says Serhiy Makogon, president of OGTSUA, the operator of gas transmission pipelines in Ukraine.

BiznesAlert.pl: What is the evidence of Russian non-economic use of NS-1 and NS-2? What numbers show that they omit Ukraine just for the political reasons?

Serhiy Makogon: Gazprom estimates its annual sales to Europe at ~200 bcm per year. Actual exports to the EU were below 150bcm in 2020.  Exports to Europe (inclusive of Turkey, UK, etc.) were 175 bcm. The existing transit capacity from Russia to Europe is more than 270 bcma (Ukrainian gas transmission system, Yamal, Nord Stream 1, Turk Stream).  Or 286 bcma if we count Blue Stream.

The infographics below show that there is no need of additional gas infrastructure to transit these gas volumes: 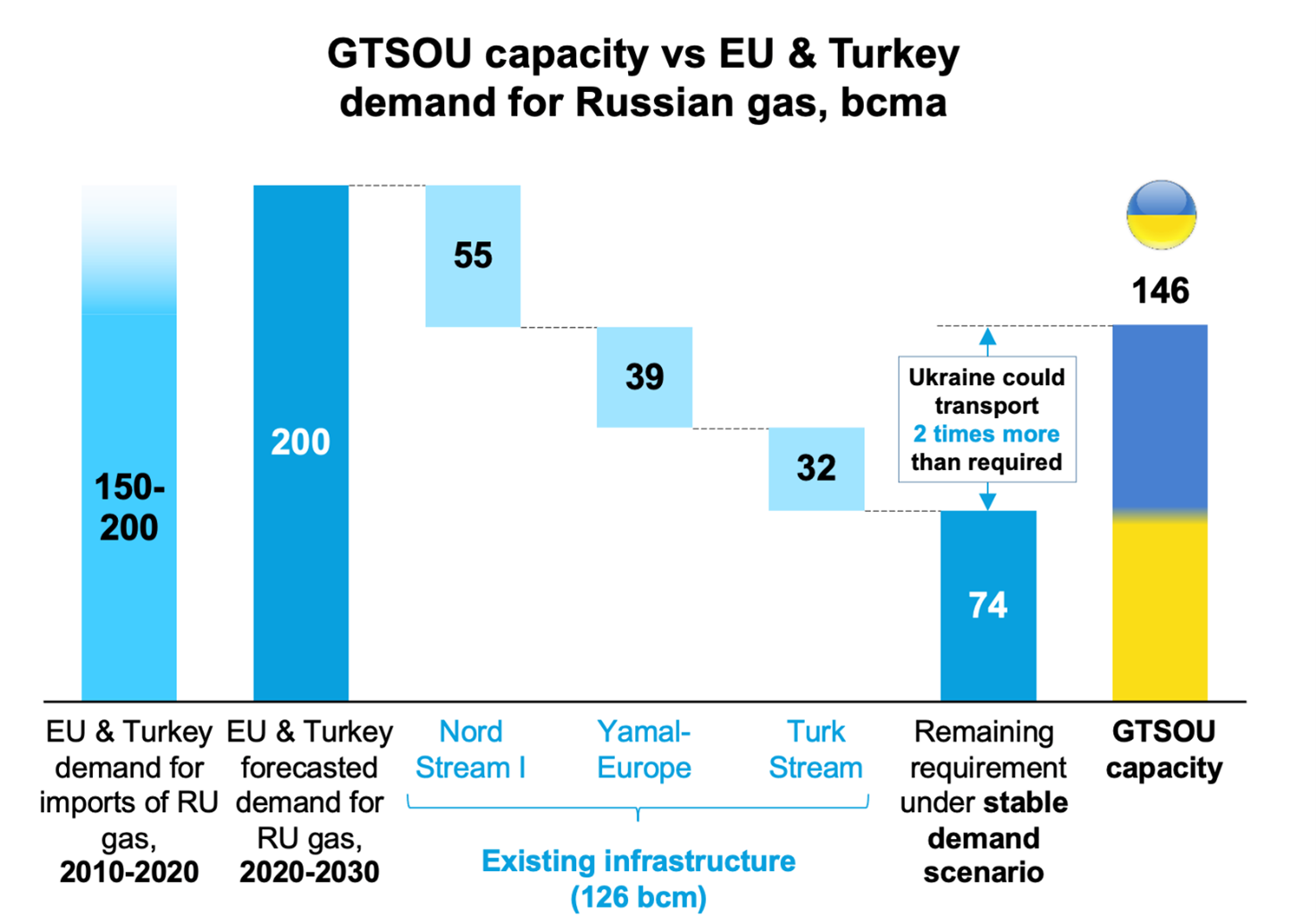 In other words, for the coming years, there is about 100 bcma of spare capacity in the East-West transit system. If Nord Stream 2 comes online, the spare capacity will reach ~150 bcma.  This shows that there is no commercial or technical justification for the bypassing gas pipelines.

The market crunch clearly demonstrates that additional transit routes do not guarantee additional supplies to Europe. In a span of 12 months, the prices for natural gas have doubled, and then, doubled again.  Meanwhile, Russia is holding back exports and refusing to book transit capacities which we have offered at every monthly auction.  Gazprom has cut supplies to Europe by ~ 20% vs. the pre-pandemic levels and is emptying its storage facilities (during the season when they supposed to be refilled) to meet its contractual obligations. Tellingly, Elena Burmistrova, Director General of Gazprom Export, said a few week ago that Gazprom, “would be able to cover additional demand with the commissioning of Nord Stream 2.”

Abuse of dominance is commonly defined as unilateral conduct using dominant market power/position to damage market competition and ultimately welfare of the end consumers. Bloomberg described the current situation as an energy shock and is warning about far reaching consequences of the rising prices on the post-pandemic economic recovery of Europe. Given that EU relies on Russia for ~40% of its gas imports (the next biggest supplier is Norway at only ~16%), I wonder what the competition authorities make of Gazprom’s recent actions.

With Nord Stream 2 nearing completion, Europe still has an opportunity to defend its markets, its laws, and its principles. Germany and EU must insist on the full application of the Third Energy Package to all incoming gas pipelines. The landmark decision by the European Court of Justice (CJEU) in the OPAL case sets a strong precedent. Many experts describe the gas market squeeze as blackmail, and we all know that caving in to such pressure never solve the problem but exacerbates it.

I believe Europe should think about supply diversification. Alternative routes, on the other hand, deliver the same gas from the same fields to the same consumers and, under the current circumstances, appear to greatly weaken supply security. As an immediate action to relief price pressure, EU should (1) demand that Gazprom renounces its export monopoly and (2) insist on moving delivery points for Russian gas to the RF-UA border, which allows western traders to book transit capacities via Ukraine directly.

How do you assess a proposal from German-U.S. declaration on Nord Stream-2 about reverse gas supplies and hydrogen in Ukraine?

Given that the GTSOU was not a party to the negotiations, we cannot assess provisions in the agreement reached by Berlin and Washington. The joint statement reads as a declaration of further actions without any concreate guarantees. We believe that such agreement should be discussed with mandatory participation of Ukraine and Russia.

Ukraine has always been a reliable transit partner for the EU and has scrupulously fulfilled all of its obligations. Under the circumstances, the best path forward would be to apply the conditions of the Third energy package on all gas routes and secure a new transit agreement for 10-15 years with a volume of at least 50 bcm via Ukraine with explicit guarantees from international partners.

We are also considering to join PGNiG in its motion to the German Regulator regarding certification of Nord Stream2 AG.

We support climate targets and decarbonization goals, which are an integral part of our development strategy. The deployment of hydrogen technologies is not an alternative to our current activities (transportation of natural gas), but a part of the evolutionary and long-term process of the entire energy infrastructure across Europe, which will take decades of joint efforts of all the stakeholders.

What is the room for cooperation between OGTSUA and Gaz-System in this context?

Security of supply for our countries is our primary responsibility as TSOs. We must ensure that our consumers will be supplied with gas in any circumstances.

Poland plans to significantly increase gas consumption, which will require additional flexibility and sources of gas for Poland. Ukraine possesses the biggest underground gas storages in the EU, which are located just in 80 km from the border. Ukraine can offer up to 10 bcm of storage capacities to Poland in order to cover its peak demand. Building such storages in Poland will require billion euros of investments. Ukraine also can offer to Polish traders access to gas supplies from the South – Turkey, Bulgaria, Romania and Hungary. Taking full advantage of those synergies will significantly contribute to energy security of Poland.

Ukraine is also interested to improve its energy security by having access to Polish LNG terminals in order to be able to directly import LNG to the country.

All these requires improving interconnection infrastructure between countries. Currently, firm capacities are available in the direction of Ukraine to Poland but not vis-a-versa.  Gas cannot be delivered from Polish system to the Ukrainian one at this time. From our side, we have made all necessary works and capable to off-take at PL-UA border up to 6.6 bcm per year, if the Polish side is prepared to provide such volumes at the agreed level of pipeline pressure. We hope that firm capacities towards Ukraine will be also developed from the Polish side.

We strongly believe that Poland and Ukraine possess everything needed in order to develop joint integrated gas hub for the Eastern Europe. Our gas markets are the biggest in the region and jointly add up to ~50 bcm per year. Poland has very ambitious plans to develop LNG terminals, Baltic Pipeline and connections with neighboring countries. Ukraine has the biggest gas storages in Europe and well developed and powerful gas transmission system, which is connected to 7 neighboring countries. With access to Trans-Balkan pipeline our counties can create powerful South-North gas corridor, which will ensure energy security of the entire Southeastern Europe – NATO’s Eastern flank.

Ukraine always was a reliable transit partner for Europe; and we hope it will continue to play this role in the future despite Russia’s aggressive maneuvering. The Ukrainian GTS adheres to all the norms of the Third Energy Package. International partners trust us, as evidenced by the record 10 bcm of gas they have stored in Ukrainian underground storage facilities.

However, it would be incorrect to think that Ukrainian GTS will exists forever as a back-up solution for the EU if something happens with Nord Stream 1 or 2. Our transit network was designed and built to transit 146, not 40, bcma of gas. Such powerful systems require about $1 billion for operation and maintenance. Without significant transit volumes and certainty of long-term contracts, Ukrainian consumers cannot be expected to foot the bill. In a scenario where our transit network is significantly downsized, all major transit routes to the EU will be fully controlled by Gazprom. And we have just seen how Russia deploys this kind of market power.

Gazprom pushes a false narrative that Nord Stream 2 is an added delivery route to Europe. There is no additionality here, if Nord Stream 2 is ever commissioned at its full capacity of 55bcma, Ukrainian route will inevitably disappear.

The Ukrainian gas storages with a total capacity of 31 bcm could store strategic gas stock for Europe to protect it from price volatility. Exactly for that reason the US created national oil stocks back in 70-s.

As the market for decarbonized fuels develops and technologies improve, Ukraine could become an important supplier of biomethane and hydrogen into Europe. However, this will take many years if not decades.  Continuity of gas transit, on the other hand, is a matter of immediate concern as it constitutes an important security buffer for Ukraine in a face of the Russian aggression.

Polish Eastern gas policy depends on the outcome in Ukraine
Energy
On Friday, December 22nd, Ukrainian Naftogaz announced a victory in an arbitration dispute with Russian Gazprom. The Russians proclaimed the same […]
More

Stępień: Market is interested in the Baltic Pipe (interview)
Energy Nord Stream 2
In an interview with BiznesAlert.pl, Tomasz Stępień Gaz-System’s President of the Management Board talks about the progress of the Baltic […]
More