Bartosik: The crisis of Energiewende is a signal for Europe (INTERVIEW) 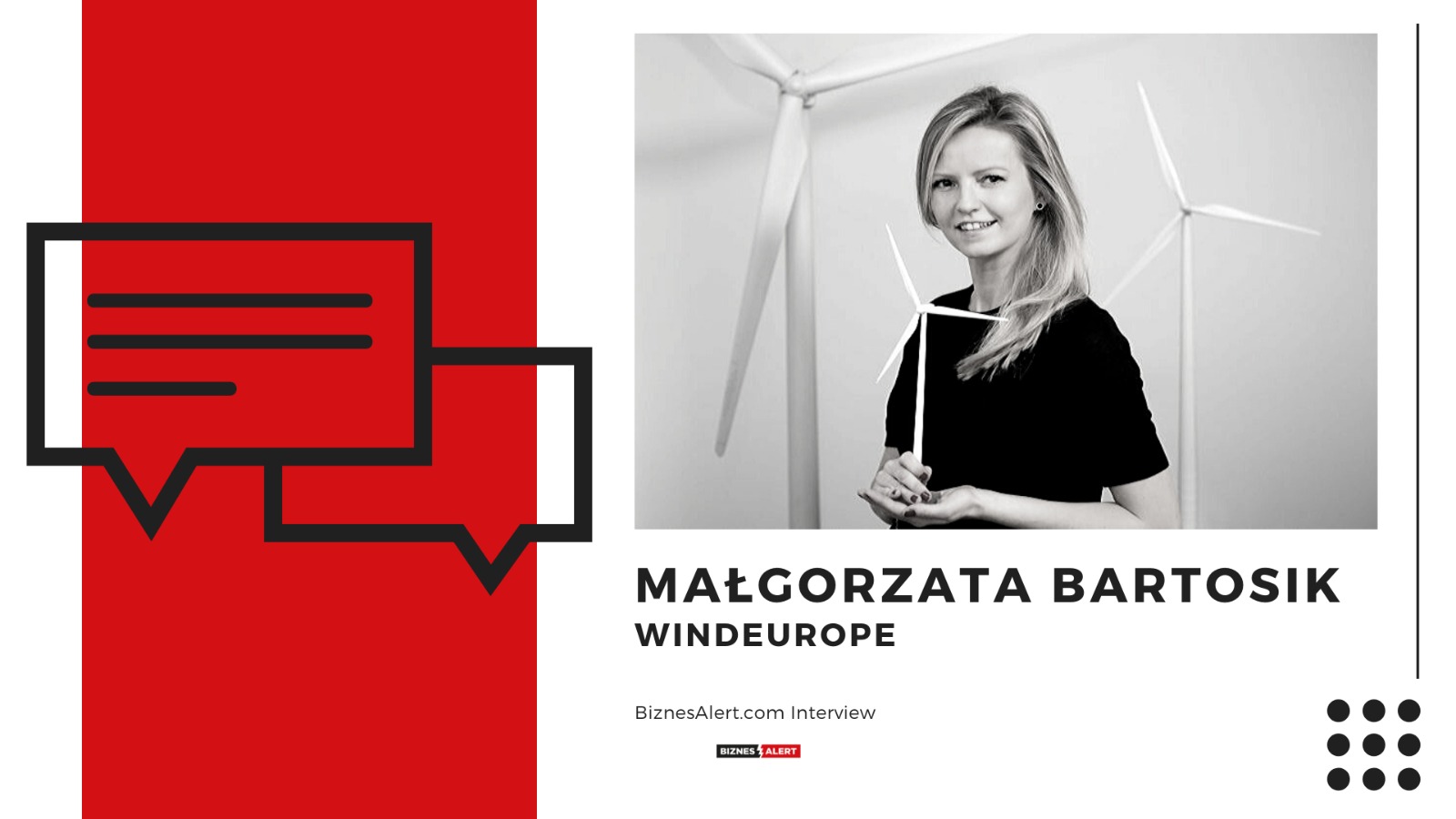 Onshore wind is in big trouble in Germany. The development of new wind farms has almost ground to a halt. The main problem is permitting – it’s got much slower, more complex and there aren’t enough civil servants to process the applications. It seriously undermines Germany’s ability to meet its 2030 renewables target and contribute to the EU target. And it’s affecting Germany’s wind turbine industrial base – says Małgorzata Bartosik, deputy head of Wind Europe in an interview for BiznesAlert.com.

BiznesAlert.pl: According to the latest International Energy Agency report, eight European Commission scenarios for 2050 show that until then Europe will need 230 to 450 GW of offshore wind energy to cope with the decarbonisation of its energy system. Meanwhile, in 2018, the total capacity is 18,5 GW. Can you build such potential within 30 years?

Małgorzata Bartosik: The numbers the IEA envisage for Europe are actually conservative. They say that we can reach 130-180 GW of offshore wind by 2040. But we’ll already have 90 GW by 2030, thanks to the increased commitments European Governments have made since they started writing their National Energy & Climate Plans. The European Commission’s eight scenarios for 2050 envisage between 230 and 450 GW by 2050, and that’s what we’re aiming for. We believe that this is both feasible and affordable. We’ll be releasing at the end of this month at our Offshore 2019 in Copenhagen a major report setting out how we plan to get there, looking at the challenges we will need to overcome and the policies we’ll need to reach this target.

To create from 230 to 450 GW of RES capacity, we need similar power in conventional sources or storage to stabilize the system. What can stabilize such a large capacity in renewable energy after 2050?

There are three key things we’ll need to do. First and foremost is the grid. We need to maximise the existing capacity of Europe’s electricity grid to its full potential. This is key to ensure that renewable power can get to consumers when and where it’s needed. Then of course we need to further build out the grid to avoid grid bottlenecks like we’ve seen in Germany recently, where there’s a lot of wind in the north and big consumption centres in the south. The second aspect is flexibility, which will become even more important as we move to an energy system with high levels of variable renewable electricity generation. Demand response is a key ingredient in that context and we’re only at the beginning in terms of tapping into the potential of that in Europe. The third aspect is storage. The technology is evolving rapidly and we’re seeing different types of storage technology coming onto the market. The energy transition will require major investment in both grids and storage. InvestEU and any new Europe Future Fund will play a key role, alongside Structural Funds and other existing instruments.

New capacities of 230 – 450 GW are huge costs, considering that currently the cost of 1 GW is around EUR 12-14 billion. Where to get this money from?

The IEA said in its recent report that falling costs and technology development have made offshore wind an obvious choice for countries as a source of energy. The report shows not only how offshore wind is as cheap as coal and gas in many regions, it’s also as stable in terms of its ‘capacity factors’. Offshore wind is now the second form of cheapest electricity generation in North West Europe after onshore wind. Costs will continue to fall throughout Europe as we start to benefit from increasingly large economies of scale and advances in offshore turbine technology, which mean we can capture more of the wind more of the time. This offshore wind expansion will of course mean increased investment. Governments should ensure they give visibility on offshore wind deployment volumes and the revenue schemes to ensure we can reach these targets in the most timely and cost-effective way. Stable regulation and long term vision is what attracts the right investors. There is also a pull of European money to help with energy transition. We should know the details on the Just Transition Fund before the end of this year. It should be a financial vehicle to help countries like Poland to transit towards greener economy in a just and fair way, not leaving people behind and not reflecting the change on their increased consumer bills.

Looking at the experience on land, do you think we need standards in Europe defining the location of offshore wind farms to reconcile all sides, such as port operators or the navy?

This is something we have looked at extensively in our upcoming offshore wind report, ‘Our energy, our future. How offshore wind will help Europe go carbon-neutral’. We will need a massive expansion of offshore wind in Europe to meet our energy and climate targets. That of course raises questions about where to build this extra capacity. Most of that extra capacity will be in the North Seas (the North Sea, the French Atlantic, the Irish Sea and the Baltic Sea). According to our estimations this will take less than 3% of space in the North Seas. But this will mean taking a smart approach to
maritime spatial planning in order to keep the costs down. Many parts of Europe’s seas are set aside for fishing, military and shipping activities. Governments will need to look at these spaces and consider how we can share them together with other users in the most efficient way. If we’re going to achieve the energy transition in a timely and cost-effective way, then this will be vital. Ports will also play a key role. If we look at the volumes of offshore that we’ll need to deploy by 2050 then ports will be increasingly involved in making this happen. Ports are natural centres of industrial activity and help to bring together knowledge and labour to offshore wind. With offshore turbines getting bigger and installation volumes going up there’s a need for new investments in port infrastructure. This is also essential as ports will play a key role in accommodating operations
related to the decommissioning of offshore wind farms and recycling of components. These investments will help the offshore wind sector to cut costs. And to help ports attract new business activities.

In Germany, according to observers, we are dealing with the Energiewende crisis. This year, only 197 MW of new onshore wind power was created, and in 2014 it was 1,7 GW. At the same time, the German government wants to introduce the so-called distance act. What conclusions can be drawn from the situation in Germany for Europe?

The current German Energiewende crisis, what can we learn from the German situation for Europe? Onshore wind is in big trouble in Germany. The development of new wind farms has almost ground to a halt. The main problem is permitting – it’s got much slower, more complex and there aren’t enough civil servants to process the applications. It seriously undermines Germany’s ability to meet its 2030 renewables target and contribute to the EU target. And it’s affecting Germany’s wind turbine industrial base. Half of Europe’s 300,000 wind energy jobs are in Germany. But more than 10,000 have gone in Germany in the last five years. And more job cuts announcements are coming. Last week Enercon, the largest German wind employer, announced to cut 3300 jobs in their German facilities. To make matters worse, German Chancellor Angela Merkel’s new “climate package” contains a raft of new measures aimed at accelerating climate action. But the package also includes a measure that would ban the building of wind farms closer than 1,000 metres from residential areas. The measure would make it impossible to build wind farms in around half the country, including where they already exist and need to be ‘repowered’. Other countries should take note as they finalise their 2030 National Energy & Climate Plans. If we are serious about the climate crisis, we must take an integrated approach. We cannot announce big ambitious targets and then not to accompany it with the right policies and market regulations.