Markowski: the social agreement with miners is an illusion (INTERVIEW) 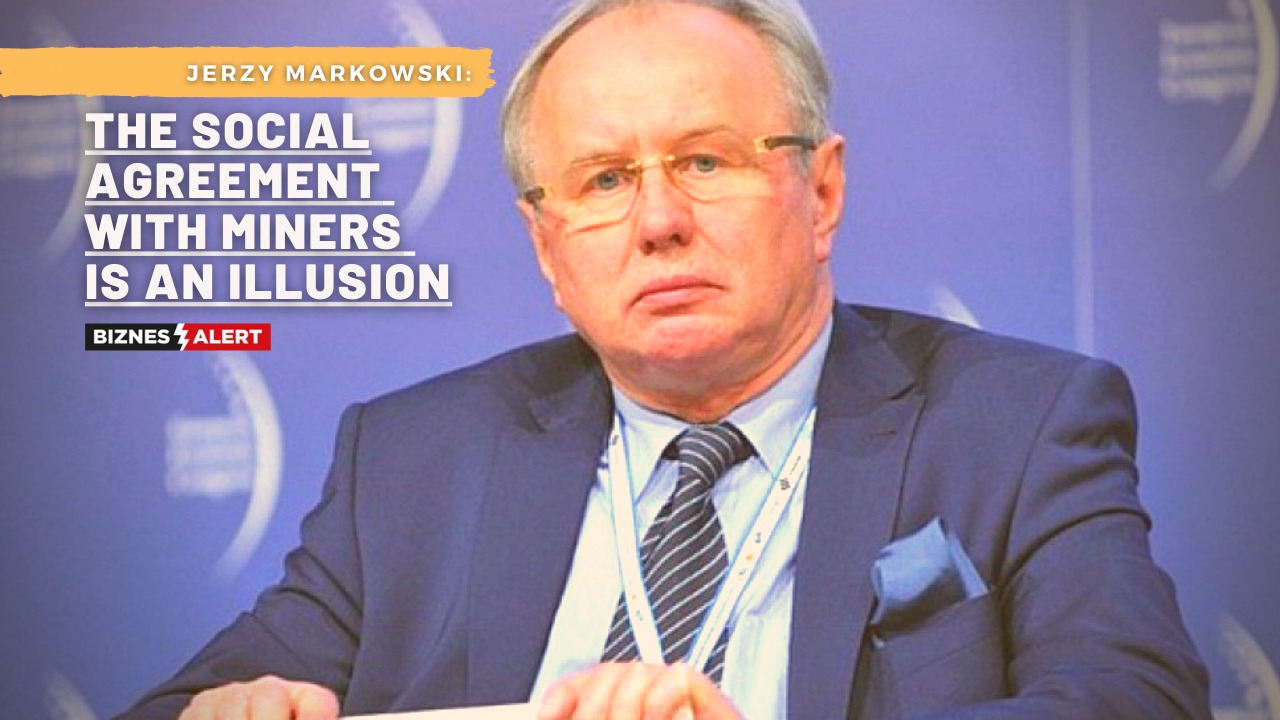 “I am baffled by the fact that the social agreement is negotiated by one deputy minister and four trade union members. With all due respect for their knowledge and experience – considering the postulates and the terms included in the document, it is apparent that we are succumbing to an illusion. The result may be that we may have to face power shortages,” Jerzy Markowski, PhD., President of the Association of Mining Engineers and Technicians and former Deputy Minister of the Economy responsible for the mining sector, said in an interview with BiznesAlert.pl.

BiznesAlert.pl: Miners are fighting to keep their jobs in the coming years. So, naturally guaranteed employment is the source of the biggest controversies…

Jerzy Markowski, PhD., As little as 25 years ago, 440 thousand people worked in the mining industry. Back then no such agreements were signed, and yet today 80 thousand people work in mining. So paradoxically the problem may be reverse. Already too few people work in the mining industry, and in the next 10-15 years about 20 thousand will retire. So, there is no dilemma related to employment security and jobs. The question is different – where will we find the workers who will extract enough bituminous coal to cover the demand. The issue lies somewhere else.

I don’t know if you realize, but this is not the first social agreement with miners in the last 30 years, it’s actually the fifth. The first one was about Katowicki Holding Węglowy and it was signed way back when Józef Oleksy was the prime minister. Four more followed. All of those agreements had one thing in common.

Nobody knows what they included and nobody remembers them. Those deals are de facto political gestures. The perspective in the document we are talking about is the year 2049, so it is so far into the future that I am surprised that anyone decided to try and predict what will happen in 30 years. We do not know how the power industry and the economy will be developing in the next 5-10 years, yet the so-called social agreement talks about the next 29 years. This is so far into the future, that a person who does not yet work at a mine today, will actually acquire retirement rights by then. So, guaranteeing employment for current workers is not an issue, the real problem is who will extract coal until 2049. When we are talking about the employment guarantees that are to be included in the deal, we are talking about jobs for those that are yet to start work in the mining industry.

The question is what the European Commission, which needs to approve the deal, will say…

The government will take the deals with trade unions to the European Commission for notification, and that’s where things may become problematic. The administration will ask for permission to use public funds to close down mines. This has been actually happening since the late 1990s. The Commission will be eager to agree to this, because it wants to shut down the mines that extract the high-emission coal, as quickly as possible. However, the trade unions will also demand that the ongoing extraction activities be bankrolled with public funds, or in other words that the government subsidizes production. This will be problematic. We stopped this in Poland back in 1992, but the Czechs and Germans did introduce this mechanism for a spell. In September 2020, when it was agreed that the bituminous coal sector would be shut down, it was decided that the mines would exist as long as they had coal deposits. Nobody will shut down a mine unless the deposit is depleted. This stabilizes the job market.

However, it has been agreed that bituminous coal extraction will be phased out in 2049…

I would not say that the social contract means mining will end in Poland in the year you mentioned. The agreement does not encompass Jastrzębska Spółka Węglowa, which owns five, soon six coal mines that also extract coking coal, nor does it include the Lubelski Węgiel Bogdanka mine. My suggestion is not to include the latter one in any social agreement. That mine has a virtually unlimited perspective when it comes to production and market demand. The only reason why one should take a closer look at this deal is to see whether in the meantime an energy substitute for Poland will emerge, and one that will be able to cover the current demand for energy, which so far has been satisfied by bituminous and hard coal. This is where the concerns are. Experts are trying to outdo each other on the deadline for a coal phase-out, but nobody calculated the scale of energy poverty caused by such decisions. We already import 20 percent of the coal needed in Poland to generate power, we also buy abroad power itself, and that import covers 8-10 percent of our annual demand. These numbers will only go up.

The draft version of the social agreement talks about the coal gasification technology that will be used by state owned companies. Is this technology profitable? Would the European Commission finally agree to it?

Of course the Commission will not agree to this. Moreover, there is no industrial technology that would enable coal gasification underground. Including such statements in the document is a kind of a theater. This is the signatories’ way to show the mining community that coal has a future. However, their thinking is irrational. We have been researching this technology in Poland for years Institute for Chemical Processing of Coal. They have been stuck for the past 40 years. Such installations do not operate anywhere in the world. Facilities for coal gasification do operate, but before we turn it into gas, we need to extract it.

What may happen with the bituminous coal mines in Silesia? The European Commission’s proposition is to use mines as pumped storage power plants to store energy. Is this doable in Silesia?

The EC talks a lot about examples from Germany when it comes to pumped storage power plants. I am very familiar with the mining industry in Germany, and believe me they don’t have a single pumped storage power plant at a former bituminous coal mine. It’s an illusion, it doesn’t work. In Poland we have two pumped storage power plants, which are used to cover the deficit in energy production during peak demand, but that is not enough. These power plants produce less power than they consume. The energy that is needed to pump the water up, so that it can produce power when it goes down, does not balance itself out, it does not give an energy effect, it only covers the energy deficit for a moment. This is wishful thinking that emerged in the context of the Krupiński mine.

You mentioned this is the fifth social contract since the 1990s. Should we expect new ones before 2049?

Yes, because every government, whatever it’s like, wants to show its political will and send a message that it talks to a given social group, in this case – miners. However, they all come up with documents that are not implemented in the end. Governments can only draft legislation that facilitates the alternatives for mining. An example of this were special economic zones, which have become an alternative to generations of mining families. Politicians like to think they make the decisions. However, in case of mining the deciding factors are the market, demand and environmental protection.

Buzek: A new fund will make a just energy transition possible (INTERVIEW)
Coal Energy
How European funds are changing Silesia and other regions that are still dependent on coal? BiznesAlert.pl asked about it one of the creators of the […]
More