Marszałkowski: The Russian Eldorado is attracting retired politicians from the West 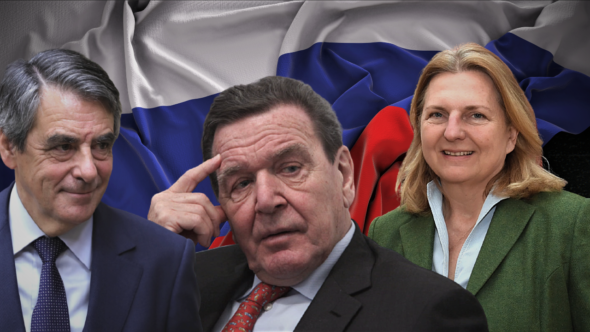 Francois Fillon, Karin Kneissel, Gerhard Schröder are the tip of the corruption iceberg, whose common denominator is Russian money, influence, “understanding” and energy projects. They are the perfect puppets, that not only serve the Kremlin propaganda, but also have real impact on policies – Mariusz Marszałkowski, editor at BiznesAlert.pl, writes.

Another one in Russia? No surprise there

The news about the decree of the Russian government on appointing the former French Prime Minister Francois Fillon did not electrify the public opinion as much as it had been in the case of the forefather of European politicians who sold out to the Kremlin – Germany’s former Chancellor Gerhard Schröder. He opened the gates to the Russian business world and many prominent European politicians followed. And not just any kind of business – they went straight for the energy industry, where they immediately received managing posts.

One’s origin doesn’t matter. Russian state-run companies offer positions to politicians from Germany, Austria, France and Finland. They are not hidden in the shadows, they are not sent away to the furthest edges of Russia, their names are not changed and their pay is not confidential. The point of all of this is not to quietly reward loyal people.

The strategy to introduce former politicians from western circles to Russian energy companies has multi-dimensional impact. First, the new employers acquire western know-how. They gain an invaluable lobbying tool, a person who certainly stays in contact with all of the most important people in their country. However, most importantly they can also personally get in touch with many of those people, without hiring numerous consulting firms and without unnecessary hype and buzz, which the political and business worlds do not actually like.

Russia may be happy about the fact that the knowledge that one could get a lucrative and well-paid job at a Russian company after leaving office, impacts the potential new recruits’ readiness to cooperate in the future. Russians are not even bothered by the legal problems those people have, for instance last year Fillon was sentenced to five years for embezzling public funds. Russia gives a chance to those who act “pragmatically” and appreciate “partnership” while in power.
This shows how corrupted and devoid of basic morality European elites are. The goal of this practice is to also show Russians the “true” face of the West, as self-interested, dirty and devoid of values.

You helped us, we’ll help you

During that time another politician who was equally active in supporting the Nord Stream project was Finland’s former Prime Minister Paavo Lipponen. As the head of the Finnish government he quickly and without any complications issued permits for constructing both strings of the gas pipeline in Finland’s exclusive economic zone, omitting Central and Eastern Europe. In turn Russians located the logistical ports for the projects in Hanko and Kotca, and in Inko they acquired rocks to even out the seabed and stabilize pipes.

After leaving politics, in 2008 Lipponen became an “independent” consultant for the Nord Stream AG operator, and advised on various issues, including environmental permits.

Lipponen has also been active during the construction, of the Nord Stream 2 gas pipeline, lobbying for the project in Finland’s governmental circles. Also in the case of this investment, the investor did not stumble into any surprises.
Karin Kneissl did not do anything noteworthy while she was the head of Austria’s Foreign Ministry, apart from one thing that made her world-famous and gave her… a job at Rosneft. That “something” was inviting Vladimir Putin to her own wedding and having a dance with him. For Putin it was the first visit to the West since the annexation of Crimea and invasion on eastern Ukraine, which was important from a propaganda point of view. It was also yet another stunt to ridicule western politicians in the eyes of their society. It is hard to imagine a reverse situation.

Francois Fillon whom I mentioned in the beginning, is to join the board of directors of Zarubezhneft, he is also one of the politicians who “understood” Russia with a lot of conviction. Under Fillon’s rule French companies, including the power company Engie engaged in the Nord Stream and Nord Stream 2 projects. It was during his rule when the decision to sell two Mistral helicopter carriers to Russia made headlines. Also during his term in office France sent to Russia state-of-the-art infrared cameras, which were installed in droves in Russian tanks.

Money does not smell, and Russia has lots of it

The four politicians seem to be free of shame and respect for the rules, which one could expect, would be considered in the West not just guidelines, but regular decency. Officially Gerhard Schröder earns USD 600 thousand a year at Rosneft. Add to that bonuses, numerous privileges, as well as salaries from other positions he holds, including the one at the board of Nord Stream AG.

Russia pays such wages, because it receives a lot more in return. Those who have been enumerated above are just the tip of the iceberg. Apart from those who are already officially working at Russian companies, there are those for whom Russia is currently preparing new jobs. While it is easy to find those people on Germany’s political scene, in fact the entire Europe has its Schröders, Fillons and Kneissels.