Mucha: Every crisis has a face. This one has the face of Gazprom (INTERVIEW) 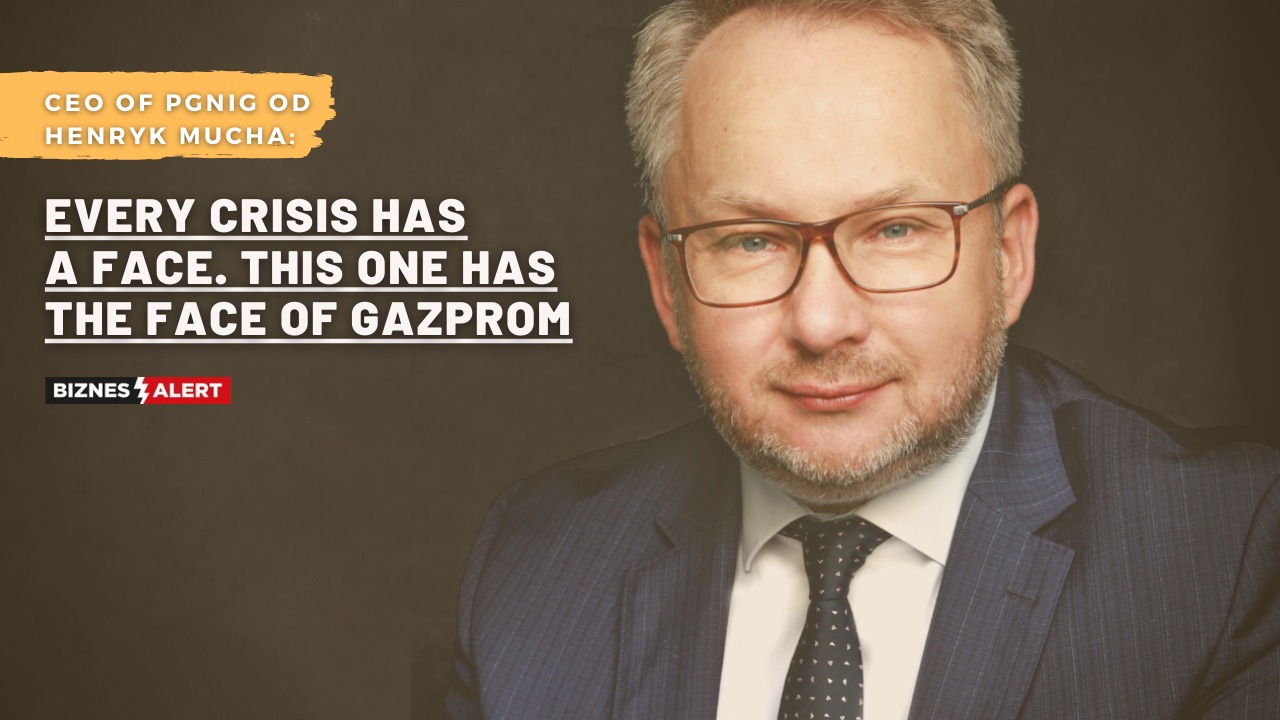 Every crisis has a face. This one has the face of Russia’s Gazprom. Europe, including Poland, is in this way “invited to talk” about the next long-term contract – says the President of PGNiG Retail Henryk Mucha in an interview with BiznesAlert.pl.

BiznesAlert.pl: Where do gas prices come from?

Henryk Mucha: Gas prices are shaped by many macroeconomic and geopolitical factors, so the situation on world markets has a direct impact on them in Poland. Gas quotations on the TGE (Poland’s only licensed commodity exchange – ed.) are correlated with the prices of this fuel on the markets in western Europe, especially in Germany and the Netherlands. An increase in prices on the Dutch stock exchange TTF causes an increase in prices on the TGE. The unprecedented spikes in gas prices in the last 12 months are a global and very complex problem. For example, on December 15, 2021, natural gas trading companies paid 596 percent more in futures contracts on the TGE than they did exactly one year ago. The current situation is still uncertain – comparing the data from January 27, 2022 on the intra-day market on TGE, the gas price was approximately 341 percent higher, and on February 3, 2022 about 318 percent higher than a year ago. In 2021, the economies of many countries started to grow dynamically, and one of the reasons was the end of lock downs. This has driven a record price increase. In the case of Europe, this also coincided with a very low level of gas storage after the cold winter of late 2020 and 2021, and the problem of insufficient supply of natural gas, mainly due to the activities of Russia’s Gazprom. The main supplier of gas to Europe does not make full use of the existing technical possibilities for gas transit to the West, and does not sufficiently fill its storage facilities in western Europe. The combination of all these negative factors contributed to record price increases in 2021 and to their continued high levels this year.

The direct reason for the increase is, of course, the higher cost the company needs to bear to purchase gas on the TGE. This is certainly not a small increase – especially for W3 tariff customers, i.e. owners of single-family houses. However, I want to make it clear – if it had been not for the change in the law, it could have been much higher. I am referring to the revision of the Energy Law, which gave us the possibility of spreading the tariff increase across three years. Therefore, despite several hundred percent spikes in gas prices on European markets, we were able to limit the increase on the final bill for individual customers in Poland to an average of 54 percent. This means that for nearly four million customers in tariff group W1, that is, those who use gas to heat meals, after taking into account the anti-inflation shield, the increase will amount to an average of 8 PLN per month.

How to explain the difference between the offer for companies and households?

The offer for the segment of business customers is not subject to tariffs by the Energy Regulatory Authority as of October 1, 2017 as part of the next stage of liberalization of the gas market after the release of wholesale prices. On January 1, 2024, the tariff for other consumers -that is, households – will disappear. Will it disappear completely? I believe that the current gas crisis and its impact on gas prices in Poland will be a sufficient reason to implement additional mechanisms to protect some customers. Such solutions, for example the social tariff, exist in western Europe.

Where are these price hikes in the gas market coming from?

The end of 2021 was marked by a couple of important dates. The first was December 15 and a 596 percent increase in gas prices year on year. The next was December 22, when the price of gas on the TGE, which depends on what is happening in Europe, and where PGNiG Retail buys almost all of its gas soared to an all-time high of EUR 190 per one megawatthour. This was the peak of the gas crisis, because obviously that’s how you have to talk about it. Not only Poland, but France, Great Britain, Germany and the Netherlands are now also implementing various assistance programs for end customers, as well as for companies selling gas – they are also affected to the same extent by the crisis. Because they are more resource-rich societies, they deal with it differently.

Gas is flowing, but it’s very expensive. Are we sure we’re dealing with a crisis?

In the third week of December last year, gas in Europe was ten times more expensive than the average in America and more expensive than gas on the Asian market, which has always been the most expensive and receptive. Why? First, lower temperatures on our continent at the beginning of 2021 led to a faster squeezing of gas from storage facilities in western Europe (in a significant part managed indirectly by Gazprom), which were then not filled to the proper levels. In the European Union there is no obligation to store gas fuel, in our country such regulations exist and are followed. Second – the decision of the Russians to limit the possibility of gas transmission under the so-called short-term contracts. Another factor is the political project Nord Stream 2, and the actions that have been taken to speed up its certification. These are, in fact, the main reasons for the unprecedented gas crisis in Europe. Every crisis has a face. This one has the face of Russia’s Gazprom. Europe, including Poland, is in this way “invited to talk” about the next long-term contract.

When will the crisis end?

As I have already mentioned – on December 22, 2021, we hit a record on the Dutch TTF exchange, a few days later, a larger volume of LNG set out from the Gulf of Mexico to Europe, which caused the price on the European stock exchange to immediately fall by several percent. In January 2022, we observed further declines in the spot market, but also a lot of volatility. We are in a state of uncertainty characterized by market volatility and there is no indication that this situation will stabilise in the foreseeable future. It is winter, long-term drops in temperatures in western Europe will mean greater demand for gas and thus affect the level of stocks and prices. Our company, when studying the fundamental factors affecting the price of gas at the Polish TGE, also analyzes temperature forecasts in other parts of the world – for example, in Asia . Due to the large share of LNG in the supply balance of individual countries in Asia, any amount of LNG that may not be used in Asia, with a high probability, may end up on the European market, which, of course, can also affect the level of prices on the TTF and TGE.

Will the spot market help?

PGNiG Retail purchases gas on the TGE, generally on the futures market. Since a very large number of our customers are customers whose consumption profile depends on the temperature, it should be borne in mind that the company is balancing its position in the spot market (with next-day delivery) and the intra-day market (with intra-day delivery). Tariff customers are mainly customers who use gas for heating, and each degree of change in temperature outside translates into a certain volume of purchase or resale on the spot or intra-day market.

How will the anti-inflation shield help those people who pay their gas bills? How will these solutions translate into bills for end users?

Thanks to the inflation shield, in the period from 1 to 31 January 2022, the VAT rate on gas fuel was reduced from the current 23 to 8 percent, and then to 0 percent in February-July 2022, which will positively affect the amount on the final bill for households. This is a very specific action that will have a positive impact on household budgets. For example, a family living in a gas-heated house, and therefore in tariff group W3, will save up to 590 PLN in seven months. An additional, special support mechanism for households is the housing supplement, which – depending on household income – will range from PLN 400 to PLN 1150.

The president signed a Law on the Protection of Gas Consumers in connection with the situation on the gas market. What does this mean for communities and housing cooperatives?

What does this law mean for the so-called vulnerable consumers?

The law stipulates that the gas tariffs approved by the President of the Energy Regulatory Office – in addition to households – will be made available to such entities as: hospitals, clinics, social assistance units, dormitories, nurseries, kindergartens, schools and all other entities of the education system. This group also includes cultural centers and, for example, voluntary fire brigades. Importantly – the law excludes the possibility of raising gas prices and tariffs in 2022. It provides that gas prices will be frozen at the level of prices in the tariff of the so-called ex-officio sellers for the period 1 January-31 December 2022. This price is the maximum price. This means that the terms for consumers, who earlier had signed a contract with a supplier with a lower price, will not change until the deal expires.

What does this law mean for gas retailers such as PGNiG Retail?

The law provides that gas sellers will be entitled to compensation for the customers covered by the tariffs, which will offset the costs these traders had to incur to sell the gas to the protected entities. This will be the difference between the actual purchase price of the gas and the sale price according to the tariff. In the case of an ex-officio seller, the compensation shall be the difference between the list prices on 1 January 2022 and the tariff.