Naftogaz released unaudited consolidated financial statements as at and for the nine months ended 30 September 2017. The document is available under this link. The Group posted a net profit of UAH 27.1 bln (approximately US$ 1.0 bln) for the 9 months of 2017. This is a 15% increase over the same period of 2016, mainly due to increased gas transit volumes. A detailed review of the 9M 2017 results is available here.

The Group’s also achieved profit for the 9 months of 2017 in the crude oil and gas condensate refinery and oil transportation segments.

Gross trade accounts receivable during the 9 months 2017 decreased by UAH 7.5 bln, mainly in the district heating companies for the needs of households. This change reflects seasonality between natural gas consumption and budget settlements for subsidies. 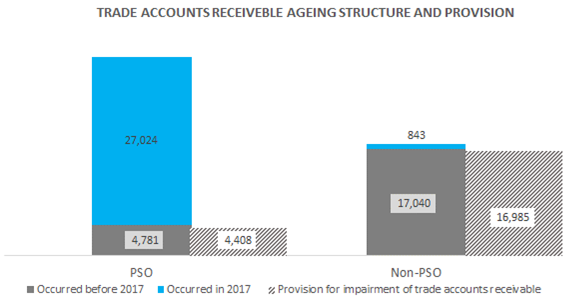 Loss in the gas storage segment amounted to UAH 1.8 bln, that is 7% higher than for the 9 months of 2016. Oil and gas condensate upstream segment resulted in loss of UAH 0.1 bln.

The total volume of subsidies to lower-income consumers financed by the government during the 9 months of 2017 amounted to UAH 42.8 bln, 101% higher than in the same period of 2016 due to increased cost of subsidized goods and services as well as a higher number of subsidy recipients. A major share of subsidies were used by households (65%) and district heating companies producing heat for households (24%). As at 1 October 2017 the outstanding amount of subsidies due to Naftogaz from the State amounted to UAH 9.8 bln.

Taxes and payments to the budget

Poland and Ukraine in gas: together, yet somehow separate. Will US LNG change that?
Energy
The Polish-Ukrainian Gas Forum which I had the pleasure to moderate was a feast for natural gas sector analysts. Poland and Ukraine want to […]
More

U.S. LNG delivery to Poland cheaper than gas from Russia and German market
Energy LNG
An interview with Maciej Woźniak, PGNiG’s Vice-President of the Management Board for Trade. He explains the benefits that the LNG terminal in […]
More