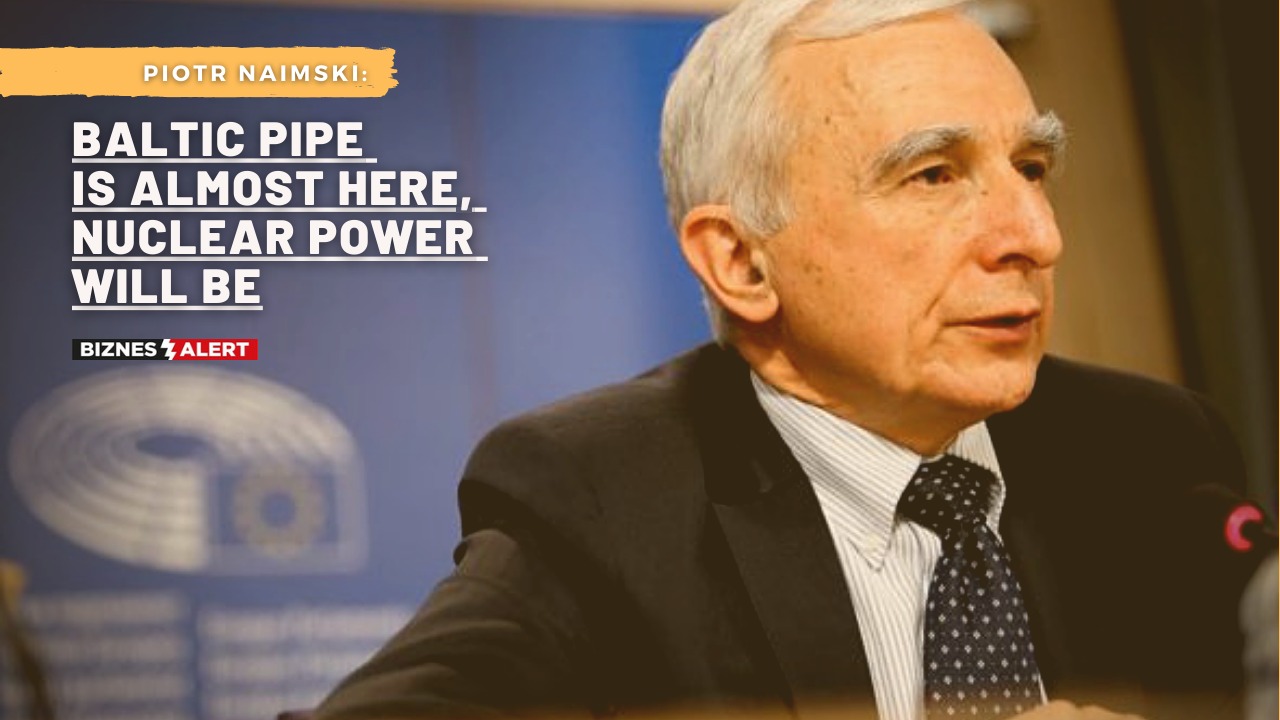 “At this point nuclear power is not part of the political disputes in our country. It’s worth believing in people and in finishing this project,” Piotr Naimski, Government Plenipotentiary for Strategic Energy Infrastrcuture, said in an interview with BiznesAlert.pl. “Five years ago few people believed in the return of the Baltic Pipe, and today it is close to completion.”

BiznesAlert.pl: Does Poland favor the US when it comes to the negotiations on the technology for the planned nuclear power plant?

Piotr Naimski: It’s not a question of favorizing. However, we do have an intergovernmental agreement with the United States, which provides that the Polish government is to receive an offer. American companies have a year and a half to present it. In line with the agreement, we also have a steering committee that is developing a framework for the participation of a financial partner.

We will determine the requirements for the technology and public aid together with the European Commission and Euratom. The Polish-American agreement has been notified with Euratom. All of our actions are in line with EU regulations. However, the talks with the US are advanced, and there are a lot of reasons to believe this offer is attractive for Poland.

Were other bidders motivated by the fact that the talks with the US are advanced?

France has suggested EDF was interested. We are presenting our expectations. If the French do make an offer, we will consider it. The deadline is mid-2022. If real alternatives emerge, they will be considered, but so far none have.

What challenges will the Polish nuclear power have to face, in view of the fact that some EU states are calling on making public funding unavailable for nuclear power in the European Union?

We are dealing with different approaches to this issue among the member states. Germany’s energy policy is about quitting nuclear power, but France decided to build new reactors. Great Britain is planning new, large nuclear power plants. Holland is considering such an investment as well. Czechia and Hungary also want to have more nuclear power. At this point, Europe is starting to recognize that it will be impossible to hold onto the European Green Deal, i.e. the phase out of emission-generating power sources, without nuclear power, which is emission free. Already this view is obvious. The Polish energy transition requires that in the long term we will phase out coal, but it needs to be replaced with stable baseload plants. Nuclear power plants fit this role, and they need to be built at the same time as renewable energy sources.

Gas will complete our energy mix. The coal-fired power plants that will be shut down, have to be replaced with new ones that will be equally reliable. The first nuclear reactor is to be ready in 2033. The new gas power plants should be built in the 2020s. Power companies should be the obvious investors. One of the conditions for the energy transition to be successful is that investments in gas generation need to be implemented at the right time. I am talking about a sustainable energy transition, where the number of gas-fired power plants will not make us reliant on unwanted gas sources, but nevertheless will be enough to replace the outgoing coal power plants. The main goal is to maintain Poland’s ability to generate enough power. A deficit in energy generation will create a risk of making our grid dependent on energy imports, an issue we want to avoid.

Is there a limit to the development of gas generation?

In the early 2030s we will be able to import 25-26 bcm of gas a year to Poland. Add to that almost 5 bcm from domestic production. So, in total Poland will secure about 30 bcm of gas, thanks to the secure infrastructure owned by Gaz-System and contracts signed by PGNiG.

Without the Yamal contract?

Yes. Without eastern entrances to the Polish transmission system. Today, to a large degree the problem is that power companies need to find money to bankroll investments in gas. This is the true bottleneck, not limitations in access to gas outside of Russia. The companies have to build gas-fired power plants in, among others, Dolna Odra, Ostrołęka, Kozienice. Of course nobody is hoping that the EU will finance gas-fired power plants, but acquiring loans for such investments may be made more difficult, but still possible.

Will nuclear power, which has an equally tight schedule, face similar issues?

The PGE EJ1 company was taken over by the State Treasury and is now preparing the environmental and location reports. These are being drafted simultaneously and are almost finished. They will be completed this year. Right now two locations are on the table – Lubiatowo-Kopalino and Żarnowiec. One is plan B, because according to environmental regulations an alternative proposal needs to be always included.

Is there a plan to build the grid connection?

Polskie Sieci Elektroenergetyczne (PSE, Poland’s TSO – ed.) are preparing for this project, but the specific route will depend on the final location of the nuclear power plant. PSE is planning the grid, so that it can be connected to offshore wind farms and the NPP. We are talking about 6-9 GW generated from nuclear power, out of which 2.2-3.5 GW will be produced in Pomerania. This is about the construction of completely new power lines that will transmit electricity from the power plant, and about strengthening the grid in northern Poland. It will also be necessary to supply power to the construction site via the grid.

Does this entail new environmental challenges?

Yes, but of course we will plan the entire investment with minimum impact on the environment. We are hoping that local governments will support the investments and cooperate with us.

In 2023 we will have parliamentary elections. What political challenges does this bring?

The plans to develop nuclear power are safe, because they do not stir political emotions. There is an understanding that opposing nuclear power is irrational, and 65 percent of Polish citizens support this investment. The 20-year nuclear program is to be continued thorough many terms and by many governments. Its implementation will become a yardstick for measuring the maturity of our state. The history of the LNG terminal is similar. The hub already exists, and the majority of Poles are happy about it, some are even proud. Nuclear power is not part of the political disputes in our country. It’s worth believing in people and in completing this project. Binding decisions on this issue should be made before the elections, so in 2022. At that point the government will have received the cooperation offer, and soon after that a contract with the company that will build the plant. If we took into consideration only bad scenarios, we would be stuck in one place, afraid of doing anything. Five years ago few people believed the project to build a gas pipeline from Norway’s gas deposits to Poland would be successful, but today the Baltic Pipe is close to completion. October 2022 is next year!

Can someone derail the Baltic Pipe at this stage?

We are taking into consideration all the possible factors. We are trying to foresee all the difficulties and remove them if they do crop up. There should not be any more problems with the construction of the Baltic Pipe.

Stępień: Baltic Pipe and LNG terminal in Świnoujście increase diversification in the region
GAS Norwegian Corridor
– Over the next years, the Company’s priority will focus on diversification of directions and sources of gas delivery, to be reached through […]
More