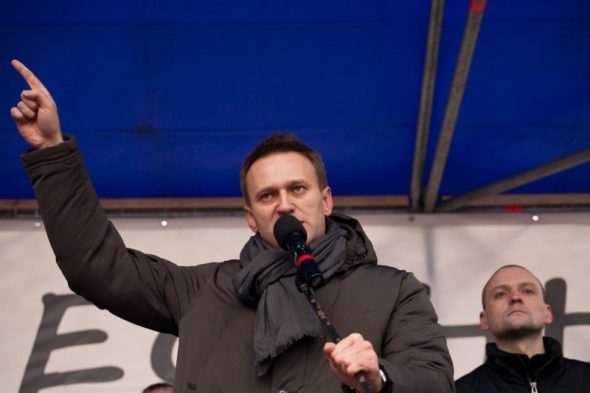 Alexei Navalny called on the German government and the European Union to slap sanctions on Putin’s inner circle. Europe should listen to him and stop Nord Stream 2 – writes Wojciech Jakóbik, editor in chief at BiznesAlert.pl.

Navalny told Germany’s Bild daily that sanctions against the entire Russian Federation were not effective, because they did not do any harm to the beneficiaries of the power system in the Kremlin. “The most important thing is to impose entry bans on profiteers of the regime and freeze their assets. They embezzle money, steal billions and at the weekend they fly to Berlin or London, buy expensive apartments and sit in cafes,” he enumerated. The Organisation for the Prohibition of Chemical Weapons confirmed that traces of Novichok, a military poison (nerve agent), were found in Navalny’s blood. The Kremlin has been accused of using the agent by many, including Berlin.

Navalny accused Gerhard Schroeder, a lobbyist for Gazprom and Rosneft who is criticizing the investigation results into the poisoning, of being paid for by those companies. “I don’t have a document that says in black and white: Mister Schroeder, here is your suitcase full of money. But I have no doubt that Schroeder receives shadow payments,” the opposition leader claimed and referred to the fact that he had spend years as a lawyer analyzing the way those companies operated. In his opinion such actions weaken Russia, which is evidenced by the fact that it lost its competitive edge in the space industry, which had been a source of pride for the Russian people in the 20th century.

The Nord Stream 2 project is a great illustration of the issue explained by Navalny. “Now Schroeder is Putin’s errand boy, protecting murderers,” Navalny concluded. And he really is an “errand boy” when it comes to the contentious gas pipeline, which he protects from U.S. sanctions and criticism in the European Union. Schroeder symbolizes the fact that Germany is embroiled in relations with Russia, which involve using business tools to achieve political gain. At the same time Nord Stream 2 is a symbol of the corrupt mechanism explained by the Russian opposition leader. The words of the representatives of the Russian opposition organization Free Russia say it all. According to them, the goal of Nord Stream 2 is to “help Putin’s people in Russia to bypass Ukraine and engage in cooperation with German companies.” It was Free Russia that established that Nord Stream 2 was paying for polls to convince the public opinion in Germany that the project had a lot of support in the country. Gazprom corrupts businessmen and politicians. It also uses such projects as the gas pipeline in question to allow Vladimir Putin’s inner circle to earn money. Free Russia’s analysis of the earnings of Arkady Rotenberg, aka Putin’s personal banker, is a good example of this scheme.

This means Putin and his posse probably unofficially profit from Nord Stream 2. Europe should target this very mechanism, especially that it is becoming successful at corrupting Germany, which is now holding the EU presidency and thus leading the continent. On the 28 of September, the Tagesspiegel daily revealed, and BiznesAlert.pl has been reporting on this for months, that the German government justified the construction of Nord Stream 2 based on data delivered by Gazprom, which, by the way, in the past had been different from the estimates of the European Commission and facts. Russians would usually overestimate the demand for gas in Europe, arguing that Nord Stream 2 would fill in any gaps. However, in reality the goal of the new gas pipeline was to redirect the existing volume from the Ukrainian route to a German one. Despite the fact that reports paid for by Gazprom in Germany argue cheaper gas would flow via Nord Stream 2, also to Poland, independent analyses by Europe’s Breugel think tank warned that deliveries from Russia via Germany may increase prices in Central and Eastern Europe.

Therefore, if Europeans want to punish Putin for yet another attempt at a murder by poison with a chemical weapon, as well as other hostile actions against the EU and NATO, whose long list does not need to be included here, they should hit where it will really hurt the regime. According to Navalny, that spot is Putin’s inner circle. It wants to profit from Nord Stream 2 and use it to corrupt Europe, examples of which are already visible in Germany with Gerhard Schroeder leading the way. It’s time for the European Union to block Nord Stream 2. The European Parliament has proposed sanctions against this project and it’s enough to follow that recommendation. It is Germany’s chance to prove once and for all that it will not be embroiled in Kremlin’s schemes. “Nord Stream 2 has never been in Germany’s interest. One-sided dependency, in this case on Russia, should be avoided,” Norbert Roettgen, Angela Mergel’s potential successor, said in an interview with the Rheinische Post daily.

Will the Iron Chancelloress listen to him?

Ruszel: Germany is building an energy dominion
GAS Nord Stream 2
According to dr. Mariusz Ruszel from the Rzeszów University of Technology and the Ignacy Łukaszewicz Institute of Energy Policy, Germany joins the […]
More