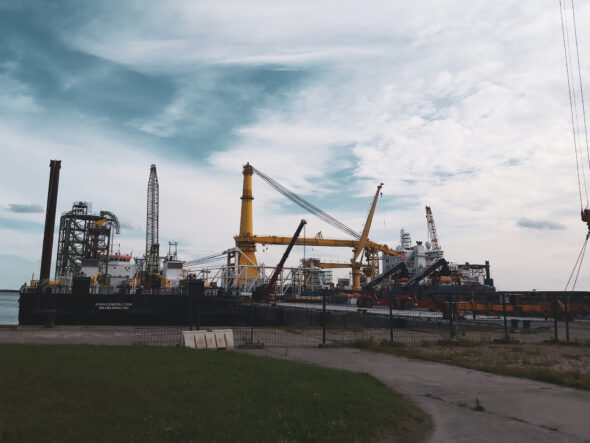 The modernization of the ship that will finish the construction of the Nord Stream 2 gas pipeline has been completed. Before continuing the pipe laying, the vessel will conduct a number of sea trials. Will the works begin before the possible U.S. sanctions enter into force? – Mariusz Marszałkowski, editor at BiznesAlert.pl, asks.

According to BiznesAlert.pl’s sources, the modernization of the Akademik Cherskiy is coming to an end. The ship is to start sea trials near Kaliningrad on the 1st of October. The previous schedule said the vessel would depart from Mukran on 28 September, but that deadline was missed. The sea trials are to take about two weeks to complete. The crew will test the electronic systems and, importantly, the newly installed anchors used to position the ship during pipe laying. The Akademik Cherskiy was equipped with eight anchors. Each one has its own generator, which powers the ship winch. The ship will be accompanied by tugs, whose job is to move and tension the anchor chains.

The ship still needs additional work, so after the trials it will return to the Mukran harbor, where it will be serviced for another several weeks. After that the vessel will be ready to build Nord Stream 2. Another sign that the sea trials are about to begin is the fact that the Anchor Handling Tug Vessel Vladislav Strizhov, which is owned by Gazprom’s daughter company Sewerneftegaz, is headed for the Mukran port. The ship will probably take part in the anchor tests.
The duration of the trials will depend on the weather in the Baltic. If it’s stormy the tests will take more time.

Will the U.S. expand sanctions before Nord Stream 2 is finished?

The extended works on the Akademik Cherskiy give Americans more time to introduce sanctions against Nord Stream 2. Considering the current pace of the modernization, it seems doubtful that the ship will be able to start the final stage of construction of the contentious pipeline before the beginning of November. Washington will not miss the upcoming sea trials, especially that the Trump administration has recently become more active when it comes to imposing new sanctions on the project. This is evidenced by the U.S. State Secretary Mike Pompeo’s statement on building an international coalition against this investment. However, it seems that setting up this alliance will not take a lot of time, especially that is has been operating informally for many years with Poland, the Baltic States and Ukraine in the lead.

At the same time, Berlin’s change of heart is out of the question. Considering Germany’s attitude towards stopping the investment, or rather its unwillingness to do so, the American. sanctions are the only factor that may halt the construction.

It seems likely that Nord Stream 2 will not be completed in 2020. It would take at least 70 days for two marine vessels to lay the remaining 160 km of the twin pipe. However, considering the season of the year, the difficult weather, and the fact that Russians will use anchored vessels, which can lay up to 1.5 km of pipes a day, the works may take longer.

Will Americans use this time? A lot may depend on who will become (or remain) the U.S. president after the upcoming elections. The Akademik Cherskiy setting out into the sea may therefore become a potential trigger for actual U.S. action.