Nowakowski: Poland may be a battery powerhouse (INTERVIEW) 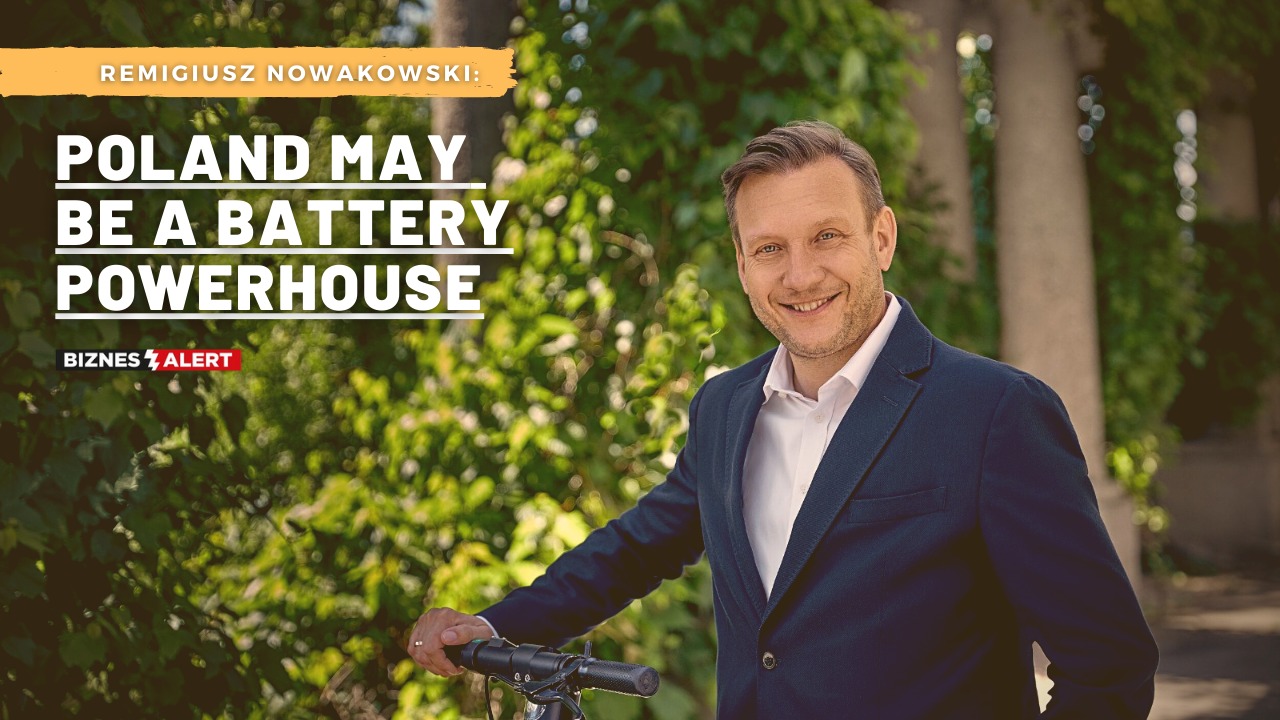 There are already three electric car battery factories in Poland, and it looks like another one will find its way here as well: one of the six that Volkswagen is planning to set up across Europe – Remigiusz Nowakowski*, President of DISE, says in an interview with BiznesAlert.pl.

BiznesAlert.pl: First let’s solve a language question: are we talking about batteries or accumulators? I am asking because usually the term battery is used to refer to a single-use product, whereas accumulators can be recharged. And the ones installed in cars are definitely rechargeable.

Remigiusz Nowakowski: Accumulators are filled in with hydrochloric acid, are full of led, heavy and run out. Today when we talk about electric cars, I guess we use the word battery.

So let’s stick to it. Volkswagen wants to build six 40 GWh battery factories in Europe, which means every facility will be able to produce in total cells of this capacity every year. This is equal to 600 thousand batteries 65 kWh each, that are used in an average e-car. The company said that one of those factories may be built in Central Europe – in Czechia, Slovakia, or Poland. In your opinion which country has the biggest chance and why?

I am all for Poland…

I don’t doubt that.

Of course the fact that I am Polish is one issue, but I do honestly think that there are a few rational arguments for setting up this factory in Poland. To a large degree we owe this to the Minister of Climate and Environment Michał Kurtyka who, even earlier as Deputy Energy Minister, had sought to prop up Poland’s position in the European Battery Alliance (EBA), whose goal is to ensure that Europe will benefit from the growing electric car market. So from the beginning we have been preparing to play an important role in this emerging industry.

Second, I think Poland’s rich experience when it comes to the car industry also plays an important role. In recent years the production of components has been developing rapidly. And finally, Volkswagen already has a strong presence in Poland…

However, the car industry is actually big in all of the three states and Volkswagen is also present in each of them. In Czechia it has Skoda and in Slovakia it produces the Tuareg, Audi Q7, Porsche Cayenne…

It’s true, but the fact that Volkswagen is feeling at home in Poland is one of the reasons why it should continue to grow here.

Another very important argument is that two other investments in battery production in Poland have been already announced. LG Energy Solutions in Kobierzyce near Wrocław, previously LG Chem, will become the biggest giga-factory in the world after increasing its capacity from 20 to 100 GWh. It will produce batteries not only for electric cars, but also for other industries. Whereas Sweden’s Northvolt AB has announced it would build a battery factory in Gdańsk. At the same time the Mercedes-Benz battery factory in Jawor was opened in September last year.

All of this confirms that Poland offers good conditions for developing this industry and, as it turns out, we will have competencies in this area.

Other arguments include cooperation with universities and preparation of staff, labor costs that are still competitive, as well as our large and absorptive market. Add to that access to employees, because Poland’s population is a lot bigger than Czechia’s and Slovakia’s. I guess this is an important argument in this process as well.

What can the investors count on?

The Industrial Development Agency granted LG government support to expand its factory in Kobierzyce, near Wrocław. The investors that put their money in Northvolt included the European Investment Bank and the EIT InnoEnergy institute, which supports not just production, but also battery recycling, which will be very important in the future.

Further opportunities are created thanks to the energy transition. Due to the unfavorable energy mix, which is too reliant on coal, Poland will be one of the biggest beneficiaries of the Just Transition Fund, which will be worth EUR 17.5 bn. Such investments as battery production for electric cars bring us closer to achieving climate neutrality. In the pipeline there are also funds from the National Recovery Plan, whose draft says that e-mobility will be bankrolled with EUR 6 billion.

Of course the subsidies from the Just Transition Fund, from which Poland will receive about EUR 4 bn, will be given only to a few regions, mostly Upper Silesia. I think that the money that will be spent on economic recovery and new jobs there could be funneled into production that will contribute to the energy transition. It’s already been decided that the factory where Poland’s first electric car – Izera – will be produced will be set up in Upper Silesia.

Actually Izera will be manufactured in Lower Silesia. In Upper Silesia the name could be Czantoria.

The name needs to be easily associated with Poland, that’s all.

Let’s go back to the battery. In Czechia the energy conglomerate CEZ could be Volkswagen’s partner. Can you imagine Poland’s Enea, Energa, PGE or Tauron taking on such a role?

I am sure energy companies can be good partners when it comes to e-mobility projects. In the segment of innovations for energy storage this type of investments are certainly possible. However, I don’t think the scale would be big enough to forge a strategic alliance with, e.g. Volkswagen. It’s not doable. All of Poland’s energy groups have to make huge investments in the energy transition of their main generation sources, which in plain language means phasing out coal. And that’s the obstacle.

This means we will only have LG and Northvolt. Don’t you think that the Volkswagen factory could be included in the announced five-fold expansion of LG’s giga-factory to 100 GWh?

LG is not part of any car conglomerate…

… but it is Volkswagen’s partner?

That’s true. However, it has already been revealed that the production in that factory had been contracted for over a decade ahead.

Is it possible it was ordered by Volkswagen?

This kind of information is usually a trade secret, so we cannot be sure, but the size of that factory does create such capabilities. However, I do hope that is not the case. And that this is about additional, new production.

So let’s assume that VW’s giga-factory will be set up in Poland. How will it impact the environment?

So far in Poland we haven’t had any significant environmental disasters caused by the chemical industry. The LG factory in Kobierzyce that was opened a few years ago has not caused any threat of this kind so far. Of course, all of this depends on the security, technology and procedures. I think we have a pretty good grasp of those, so we shouldn’t be worried.

However, there is another problem as we do not know what to do with old batteries that cannot be used in cars, but still work at a lower capacity. This issue is being discussed. It is said that they could have the so-called second life as part of energy storage facilities, which could function in the energy system.

The recycling of those batteries will also be a problem, as they are made out of many metals, which do not decay. So we need to design technologies to recover them to minimize the amount of waste that will remain in the environment. It looks like this is the biggest challenge, but perhaps also an opportunity, because the issue of recycling will be definitely very important for the further development of the battery industry. As far as I know, there is such an innovative company already, it’s located near Legnica and has received support from the EIT InnoEnergy.

How does it relate to hydrogen–oxygen fuel cells? Is there a risk that large lithium battery factories will be built, but then it will turn out that hydrogen is the better solution?

Japan, which heavily invested in researching the possibility of using hydrogen at a huge scale is a good example in this instance. The European Commission also adopted its hydrogen strategy. Germany has a hydrogen strategy as well. It was adopted last year by the coalition government CDU/CSU and SPD, which shows that hydrogen will be an important element of the German economy. At the same time Volkswagen, one of Germany’s key companies, decided to invest in battery cells – undoubtedly after very careful analysis, which precedes such important decisions. This shows that there is enough room for both of those technologies.

Undoubtedly hydrogen requires better solutions when it comes to safety, which is necessary to make it available for mass usage. The advantage of the hydrogen technology is that it is very flexible. Storing energy in the form of gas, i.e. hydrogen, has a lot bigger possibilities than, e.g. battery storage units. For instance offshore wind energy, or balancing of production from renewable energy sources in general. And this is where I would expect more room for hydrogen to be applied. However, for instance Toyota since the very beginning heavily invested in hybrid cars that use both battery cells as well as hydrogen technologies.

In Germany there are already stations where one can fill up the car with hydrogen (according to EFahrer.com there are 91 – ed.). Poland has a few of its own as well. There is also talk about plans to develop hydrogen technologies, for instance in the konińskie region. Certainly these processes will proceed simultaneously.

Are you able to compare the impact of both of those technologies on the environment? Which one seems to be safer?

It’s a good question. Opponents of hydrogen technologies point to such events as the Zeppelin crash. The fact is that as of today we have not yet managed to introduce hydrogen at a large scale, especially when it comes to safe storage in pressurised form, in gaseous form, in pressure tanks. However, considering how quickly technologies are developing when proper investments are made in research and development, we may expect that we will be able to find such solutions.

Whereas looking at it from a purely physical or chemical point of view, hydrogen is certainly a lot less harmful to the environment than heavy metals, which are also difficult to recycle. And this is the situation we need to deal with in case of lithium ion batteries. This is because at this point we cannot exclude heavy metal from their production process.

* Remigiusz Nowakowski (born in 1976) is an economist and a lawyer. He is the President of the Management Board of the Lower Silesian Institute for Energy Studies (DISE), a think tank that mostly researches Poland’s energy transition, and the Vice-President of the association Employers of the Republic of Poland. He has been involved with the energy sector for 20 years. Recently he has worked at the international energy company Fortum (2008-2015 and in 2020), he was also the head of Tauron Polska Energia (December 2015-November 2016). Between 2016 and 2019 he was also a member of the Eurelectric Board of Directors, which is a European association of the energy industry in Brussels.

The hydrogen game. A new chapter in Poland’s energy policy and an old trilemma
Energy
Poland needs to engage in the discussion on the EU hydrogen economy as soon as possible. Otherwise it may become part of the menu and replace its […]
More

A sustainable energy transition in Poland, or how conventional sources can support a […]
Energy Renewables
Poland’s power sector is witnessing a major shift. In line with the global and European trends, the last decade has seen a steady phase-out of […]
More

Kwiatkowski: What can one do with an electric car?
Infrastructure / Innovations
The Vehicle-Grid Integration Summit hosted by the Technical University of Denmark at the ostensibly inconspicuous Risø DTU National Laboratory for […]
More