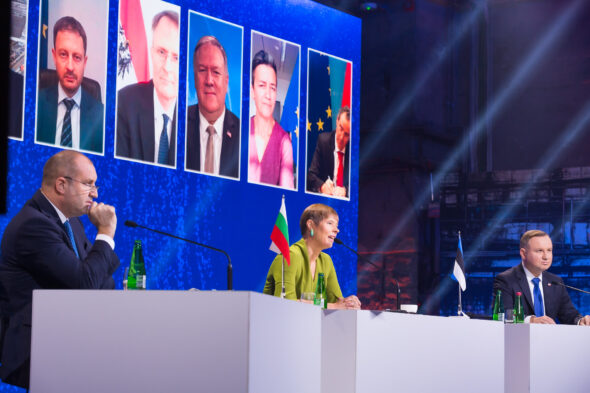 Americans are looking for money to invest in Poland’s nuclear project. The Three Seas Initiative (TSI) is looking for money to finance various projects, including those related to energy. The coronavirus doesn’t make these endeavors any easier – writes Wojciech Jakóbik, editor in chief at BiznesAlert.pl.

Americans need to come up with a financial model

The inter-governmental agreement between Poland and the U.S. on cooperating on the Polish Nuclear Power Program has been revealed. It will span over thirty years, entail wide cooperation in the civil nuclear energy sector, and include education of staff. “The Agreement provides that over the next 18 months, the United States and Poland will work together on a report delivering a design for implementing Poland’s nuclear power program, as well as potential financing arrangements. This will be the basis for U.S. long-term involvement and for the Polish government to take final decisions on accelerating the construction of nuclear power plants in the country,” the U.S. Department of Energy said in a statement. This will be America’s final offer to build an NPP in Poland. It does not exclude the participation of other partners – from France, Japan or Korea. This has been proven when the U.S. entered into similar cooperation with Romania, which enabled the country to acquire subsidies to expand its Cernavodă power plant. This means that in about mid 2022 we will learn about the propositions for a financing model provided by undisclosed American companies. At that point there won’t be enough time for a decision, because for the first reactor to be build in line with the Polish Nuclear Power Program and Poland’s 2040 Energy Policy, its construction, which is estimated to take a decade, will have to be completed in 2033. This is doable, but the schedule is very tight. It should also be mentioned that the decision to support cooperation with the U.S. could make it harder to acquire aid from other foreign partners, so the U.S. should make binding obligations to compensate for such a loss. Perhaps unofficial decisions were already made, and the official documents and announcements are only preparing the public opinion for revealing them at the right time.

Poles need to find a way to fund the TSI

The agreement on nuclear cooperation was revealed during the TSI summit, an initiative started by Poland and Croatia, which has continued despite new challenges on the horizon. The summit, hosted by Estonia, was held online and was devoted to smart connectivity and developing digital links, that will decrease the costs of economic integration between TSI member states. Estonians are also hoping to build their NPP with the help of Americans, but Estonia’s Fermi Energia together with Poland’s Synthos are betting on small modular reactors, which they promoted shortly before the summit in Tallinn. It is worth explaining that this is not an option available to Poland, because White House officials admitted in The Washington Examiner that the talks with Poland were about large-scale nuclear solutions only. The TSI fund could be used as a conveyor belt for money from the U.S. to facilitate energy projects, including nuclear. However, at this point Poland is the main shareholder of this initiative and the recent summit was used as an opportunity to increase the contribution of Poland’s state development bank – Bank Gospodarstwa Krajowego. The fund is worth almost a billion euro, so in comparison to EU subsidies that are in the tens of billions, it may be considered supplementary when juxtaposed with EU’s traditional funds. This could change the involvement of Americans, who vowed to contribute a billion dollars, but so far have failed to deliver on that promise.

The coronavirus pandemic, its second wave that has arrived this fall, as well as the global necessity to tighten one’s belt, may make it harder to bankroll Poland’s nuclear project and TSI endeavors. However, this does no mean that TSI members cannot apply for similar funding to the EU. Integration projects that are a priority for the TSI, that are enumerated on the initiative’s website, coincide with those that the EC will fund at 50 or 75 percent anyway: synchronizing the grid of the Baltic States via Poland, the gas pipeline between Poland and Lithuania, Baltic Pipe, LNG terminal in Croatia and others. Therefore, it may turn out that the TSI will contribute to the ability of its member states to jointly acquire EU funding for projects that are important to removing the developmental differences between the “old” and “new” Union, sixteen years after it was enlarged. It remains to be seen whether the U.S. will participate in this scheme, and whether the TSI will be used to bankroll Poland’s nuclear energy.