Offshore wind will replace fishing in Ustka and Łeba (ANALYSIS) 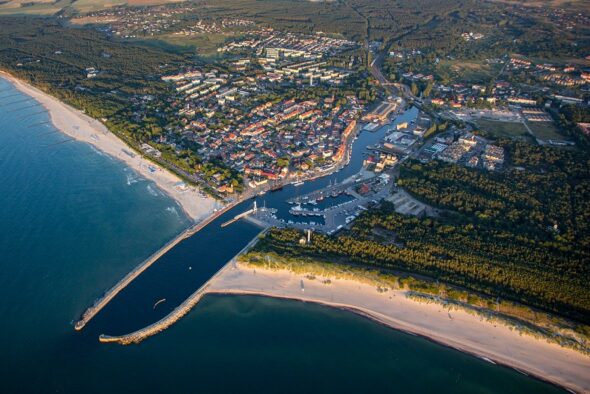 Service ports will be a key element of Polish offshore wind projects. In the coming decades they will be responsible for maintaining the wind farms, and will also generate local content, i.e. economic added value associated with this new sector of the Polish power industry – writes Mariusz Marszałkowski, editor at BiznesAlert.pl.

Energy transition forces power generation to set out to the sea

To meet the demands of the energy transition, which is to be based on low-and zero-emission sources, our country must take advantage of all the available methods, as well as its geographical location. Our ally in introducing this revolutionary change is the Baltic Sea, where in the next five years wind turbines are to be constructed. In total, by 2040 at least 20 percent of the energy produced in Poland is to be generated in the Baltic Sea. In addition to energy production, offshore wind farms will provide an important impetus for the development of new sectors of the Polish economy.

According to the data of the largest offshore wind developers, including Polska Grupa Energetyczna (PGE, state-owned company – ed.), one gigawatt of installed capacity in the OWF creates 7,000 new jobs, starting in the design phase, research and installation stages right up to maintenance and service, and finally the dismantling of the installation after it runs its course. It also generates more than PLN 3.5 billion of added value in the form of, e.g. taxes and fees.

The Polish exclusive economic zone (EEZ) on the Baltic Sea has more than 22.6 thousand square km. Offshore wind farms can be built on the basis of a location permit, i.e. the so-called Permit for the Erection of Artificial Islands. This permit is issued only in the EEZ, which was designated for this purpose in the Spatial Development Plan for Maritime Areas of Poland. The current Spatial Plan allocates 2.3 thousand square kilometers for developing offshore wind, out of which 1.1 thousand square km is already allocated to individual investors. By the end of this year, a further 11 applications for the permits are to be decided upon. In the first round, i.e. by 2030, at least 5.9 GW of offshore capacity will be developed in the Polish EEZ. Another 8-11 GW in 2040 is to be added in the next concession runs.

A key player in the Polish offshore wind market will be PGE with its Baltica 3, 2, and 1 (existing concessions). The most advanced projects – Baltica 3 and 2, which will be developed in cooperation with Denmark’s Orsted, are expected to become operational in 2025 and 2027. The lifespan of the farms is set at 30 years, but this does not mean that after that time they will be dismantled. Most likely a repowering, i.e. replacement of the old turbines with new generation ones, will take place.

Up to 273 windmills, whose height reaches at least 250 meters from sea level, are to be built as part of PGE’s licenses. The company wants to install the largest turbines available on the market. Currently the capacity of the most powerful turbines is between 12 and 15 MW. This brings the total capacity from 3276 MW to up to 4095 MW for all three PGE concessions.

A key issue for developers of offshore projects in the Polish EEZ, not only PGE, is the proper planning of the maintenance process of their offshore wind farms. It is worth emphasizing that one of the challenges is the distance between the farms from the coast. Even with good visibility, the wind farms will not be visible from the seashore.

The servicing of OWFs can be divided into three zones. The first – within the territorial sea, that is, 12 nautical miles from the shore. This service zone does not exist in the case of the Polish wind farms, as all of the licenses are located in the EEZ. The second zone includes the area between 12th and 40th nautical mile from the shore. In this zone there are, among others, two PGE projects – Baltica 3 and Baltica 2. Both are located about 33 and 35 nautical miles away from the service port. In this case, the farms will be serviced by CTV units (crew transport vessels), i.e. small, relatively fast service units, whose task is to transport servicemen and necessary equipment to the OWF area in a short time.

The general rules is that the CTV units can be useful in a situation where it takes less than two hours to travel between the service port and the farm. For the first two PGE projects, the journey time from Ustka, which is the service port, to both farms is expected to take approximately 1 hour 40 minutes. The CTV units vary, depending on the selected design technology, as well as their prowess, speed and the specifics of the tasks assigned to them. The CTVs can be a single – hull, two-hull or more, a catamaran (swath-small – waterplane -area twin hull) or a hovercraft (SES – surface effect ship). CTVs are supported by helicopters (in the event of an emergency requiring rapid response).

The third zone, located more than 40 nautical miles from the shore, is to be operated by “mother” units, i.e. SOVs (service operation vessels). These vessels are to be in the vicinity of wind farms at all times, their crews are to be changed using CTVs and helicopters. Thanks to the dynamically positioned drive, they can precisely move around the fairly large area where the wind farms are. All three PGE concessions cover 428 square kilometers. For comparison, the area of Warsaw is 517 square kilometers.

Service ports will be the heart of local content

In order for the offshore wind farm energy production and servicing process to be at the highest level, they must be complemented by a service base, otherwise known as a service port. Such a base is primarily intended to be a monitoring center for the correct operation of all of the components of the OWF from the turbines themselves, through transmission cables, transformers or foundations on which the windmill towers are located. In addition, the base, or rather the port located next to such a center, is to be the place of deployment for floating units that will take part in the transport of personnel and equipment to the OWF area. The base needs a place where specialists that service the farms can stay round the clock, and it must also have warehouses for the equipment necessary to fix and maintain the farms. The service facility must meet certain criteria and posses certain features, including, a usable area for the storage of spare parts, office space, a wharf of sufficient length, characterized by adequate load capacity, as well as ensure that the approaches to the piers and quays of the service base are deep enough. In accordance with the government plan, two locations have been identified which, in the opinion of the authorities, are optimal locations for service bases. These are Łeba and Ustka.

Norway’s Equinor has chosen Łeba as its service port. Whereas, the port of Ustka will be a service base for PGE and, probably, for the RWE group.
Importantly, these ports, after appropriate modification and adaptation, e.g. through the construction of external ports, can also be used as support for the installation port, which, according to government documents, is Gdynia. However, this will probably happen only in the next rounds of the OWF construction, i.e. in the 2030s.

Both Ustka and Łeba have been tourist centers. In recent decades, their existence and development has been largely determined by the fishing industry. These towns were important centers of Polish fishery, with a strong fishing and processing base. In recent years, however, this segment has been losing importance and slowly dying out. A service centre for offshore wind farms could be a great opportunity for these sites to rediscover their connection to the sea, which will go beyond mere geography, and take a more utilitarian character. A separate sector of businesses and services, the so-called local content, will emerge around the service ports. This is undoubtedly an opportunity to create high-paying jobs. Moreover, the municipalities themselves may see a big injection of cash thanks to the taxes paid by these entities.

While we still know little about Gdynia’s future as an installation port, we can certainly say a lot about service ports, which will be used without fail for the next few decades.