Omicron may cause a drop in fuel prices during Christmas, and an economic crisis during Easter 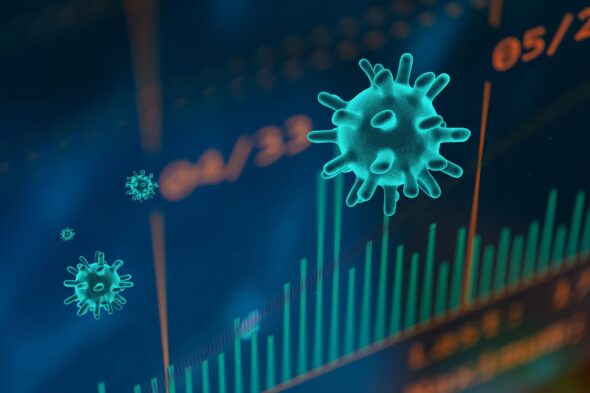 Graphs representing the stock market crash caused by the Coronavirus

On 20 December the excise duty tax cut entered into force as part of the anti-inflation shield. However, gas prices at fuel stations in Poland have been falling since the beginning of December due to the expected fourth wave of the coronavirus, the omicron variant. The prognosis that the cure for the high prices may turn out to be worse than the disease may come true if a new economic crisis hits close to Easter – writes Wojciech Jakóbik, editor-in-chief at BiznesAlert.pl.

Omicron before the shield

On the 20th of December, the excise duty cut on fuel entered into force. It was introduced under the so-called anti-inflation shield which, according to Prime Minister Mateusz Morawiecki, may result in a reduction in fuel prices by 20-30 cents per liter. As of the New Year, the VAT is to drop from 23 to 8 percent, which is to lower the price further. This is a response to the fuel market’s volatility resulting, among other things, from the energy crisis. The demand exceeds the supply, constrained by the 2020 pandemic restrictions. This is amplified by more expensive currencies led by the dollar, and accelerating inflation in Poland.

However, a glance at the fuel price charts in Poland is enough to see that the decline in fuel prices had begun even before the introduction of the anti-inflation shield. The government announced it on the 25th of November. Average prices of gasoline PB 95 began to fall from PLN 6,03 per liter on November 28 to 6,01 on December 5 and PLN 5,93 on December 19. This is because the excise tax accounts for 26 percent of the price of gasoline, VAT – 19 percent, and the purchase at the refinery – 48 percent. The seller’s margin is 4 percent and the fuel levy to promote alternative fuels is 3 percent. This means the price at the gas station is mostly determined by the cost of the fuel at the refinery, which still depends on the oil price on the markets.

Average prices of PB 95 petrol in Poland. Picture by AutoCentrum

Oil price began to drop on the global market on November 25, which is when prices at gas stations in Poland started to go down as well. This happened, because of the news about the emergence of a new coronavirus strain, which was eventually called omicron. On November 25, a crisis meeting of the World Health Organization was held on this issue, and a barrel of Brent lost about USD 10 that day. This means that concerns about the fourth wave of the coronavirus and its new variant had lowered fuel prices at stations in Poland, before the anti-inflation shield was introduced. In turn, the solution proposed by the government may strengthen this effect, bringing additional reductions starting from December 20. This mechanism is to be in force until the end of May 2022, but its fate will depend on the pandemic – a global factor, and the economic crisis’s impact on the Polish market – a local cause. The anti-inflation shield caused a decrease in the average price of petrol at stations in Poland from PLN 5,93 per liter on 19 December to PLN 5.71 per liter a day later.

Oil between restrictions and vaccinations

Forecasts of the impact of omicron on oil prices suggest that the new pandemic restrictions may limit oil demand. The emergence of a new variant of the coronavirus called omicron is expected to slow, but not stop, the increase in oil demand, which for the time being is expected to be accompanied by a steady increase in supply. Vaccinations and the absence of new travel restrictions on the roads will increase demand, but restrictions on international flights forced the International Energy Agency to reduce its forecast of demand in the first quarter of 2022 by 100 thousand barrels per day. The IEA expects the oversupply of oil on the market to reach 1.7 million barrels per day in the first quarter of 2022 and 2 million in the second. According to Rystad Energy, demand for barrels will fall by as much as 2.9 million barrels per day in the first quarter of 2022, reducing it from 98.6 to 95.7 million barrels per day. This is an argument for tightening the OPEC+ oil agreement, a step which the producers, led by Saudi Arabia and Russia, have not decided to take yet. However, it is worth following the news on the pandemic and the OPEC+ decisions in January, which may depend on the progress of the pandemic. These, in turn, will depend, among other things, on whether vaccination programmes will make it possible to not go back to the most strict restrictions that limit economic activity. If it turns out that people will be able to work despite omicron, the reduction in demand will be smaller. 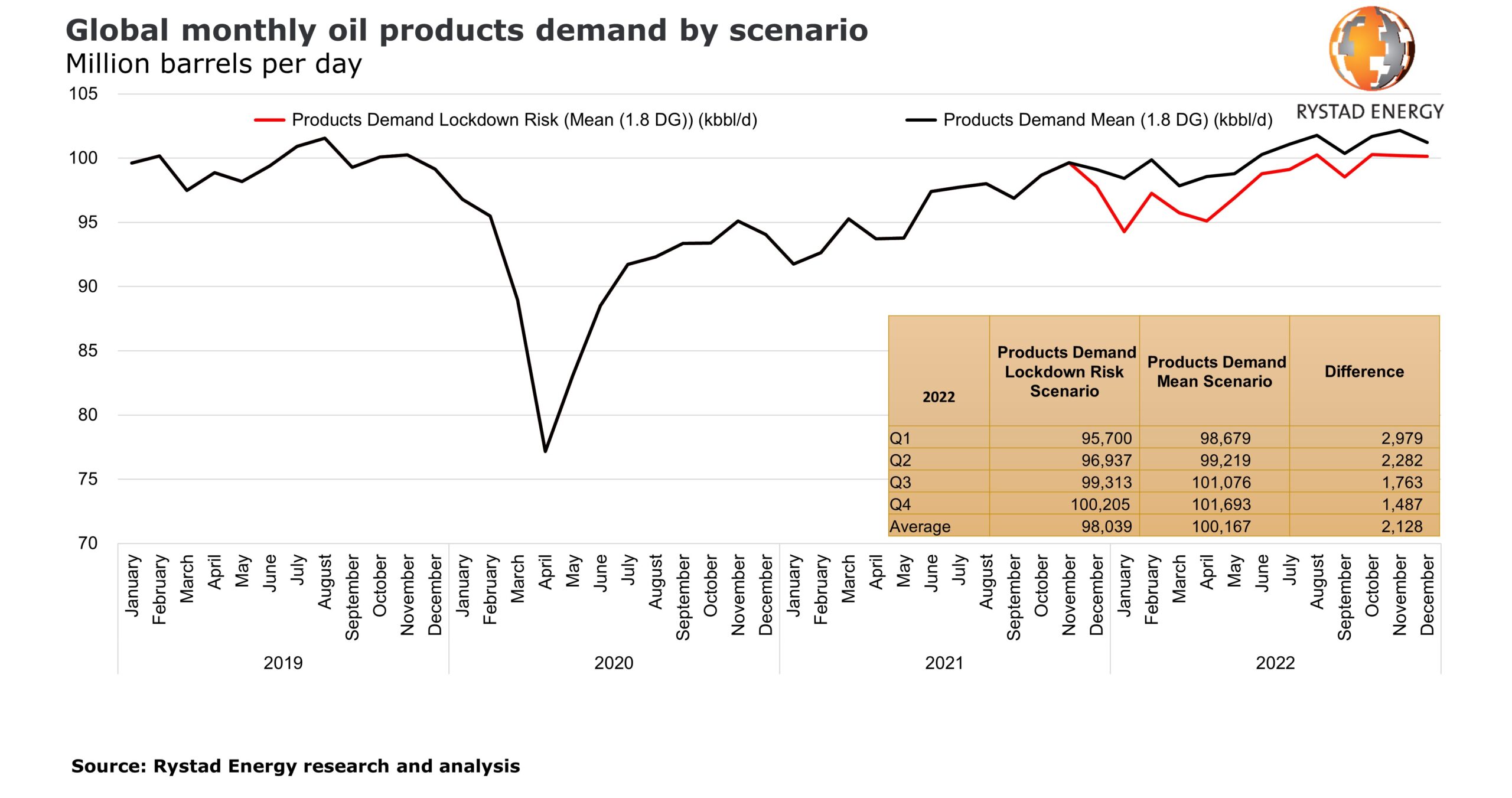 Another factor that contributes to the dropping oil prices may be the revival of the shale revolution in the US, which pays off when the barrel price in the region is around USD 70, assuming that the profitability limit starts in the most effective cases from USD 30-40 upwards. According to the forecast of the US Energy Information Administration shale oil production in the US will go up by 1.1 million barrels per day in 2022. This is much higher than the forecasts of OPEC + and the US Department of Energy. This is possible, thanks to rapid drilling for shale oil, also thanks to unfinished projects, which are a reserve for oil producers in the US, depending on the needs.

An additional contributor to the lowering of oil prices is the gradual release of strategic oil reserves by the US, that has already started this process by promising an additional 50 million barrels of oil. China, India, South Korea, Japan and the United Kingdom are to join America adding another 20 million barrels, but the timetable is not known. The IEA anticipates that these volumes will help to replenish industrial stocks of oil and fuels shrunk by the supply-constraining pandemic. The IEA expects the oversupply of oil on the market to reach 1.7 million barrels per day in the first quarter of 2022 and 2 million in the second. This may be undermined by an intervention from the OPEC+, which may increase production cuts. For now, however, the members of the oil agreement continue its easing as planned, i.e. by 400 thousand barrels per month. Meanwhile, a kind of oil cartel led by the US could lower the price of a barrel, giving additional relief to the economy, but so far its effects have been limited.

The International Energy Agency warned over the summer that high fuel prices (as well as gas and electricity) could slow down the economic recovery after a period of major pandemic restrictions in 2020. Expensive fuel increased inflation, which, as a result of feedback, raised prices at gas stations. If omicron restricts economic activity by temporarily lowering fuel prices, it may provide a temporary relief to a global economy that is struggling to cope with inflation. In Poland itself, there have already been forecasts suggesting that increases in electricity and gas prices will lead to inflation in the region of 10 percent in the first quarter of 2022. Perhaps omicron will drop cheaper fuel under the Christmas tree, which will result in decreasing the pressure on inflation. However, forecasts about the accelerating prices of goods and slowed down GDP growth mean that an economic crisis may eventually come in 2022. Its beginnings are already here. In the medium term, it would reduce the demand for raw materials and energy, ending the high prices, but also interrupting a long period of prosperity, and then the prediction that the cure is worse than the disease would come true.

Poprawa: Oil will not become obsolete. It will be used in other industries (INTERVIEW)
Energy
Oil is here to stay irregardless of whether we will use it as transport fuel or not. As a resource, it constitutes an important part of the […]
More

Biden’s decline of oil, or Trump’s rebirth after the coronavirus? (ANALYSIS)
Energy
The second wave of the coronavirus may force OPEC to up the oil cuts, but that’s just the beginning of the issues the sector will have to face […]
More

Coronamines are working non stop, but putting crews into barracks is a last resort
Coal Energy
“We are almost absolutely certain that it won’t be necessary to close down mines because of the second wave of the coronavirus,” […]
More