Orlen is preparing a funding model for the Ostrołęka gas power plant. PGNiG may help 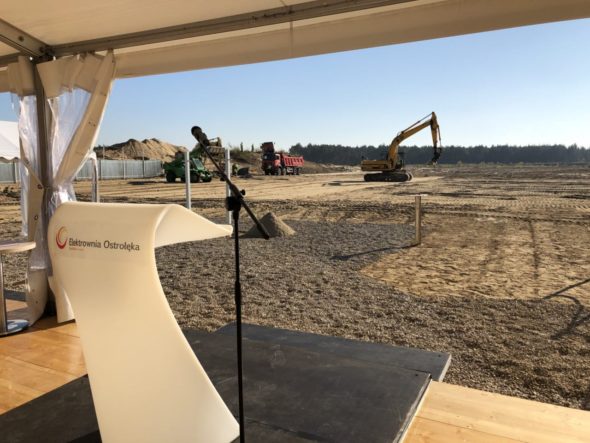 At the end of June PKN Orlen signed an annex to the contract with GE, which changes the technology from coal to gas and steam. The financing model is still shrouded in secrecy. However, the company has announced that irregardless of the variant the money is ready. It’s possible that PGNiG will be the financial partner – writes Bartłomiej Sawicki, editor at BiznesAlert.pl.

The annex signed by CCGT Ostrołęka with GE Power most of all changes the investment’s technology. The new CCGT (Combined Cycle Gas Turbine) plant will have a capacity of 745 MWe net. It will be built in the same location where the original coal-fired power plant was supposed to be constructed. It will be a single-shaft power plant with one gas turbine, a waste heat boiler, a steam condensing turbine set and a wet fan cooling tower. It will be a brown field project – the infrastructure built for the original coal investment will be used as much as possible and – it will be constructed in the engineering, procurement and construction formula (EPC).

The construction of the combined cycle power plant in Ostrołęka will start between 2021 and 2022. Whereas the works on connecting the facility to the gas grid are already commencing. Gaz-System, the gas transmission system operator has declared it would be ready to connect the unit to the gas grid in three years. As per the schedule, the core building works will end in late 2024, and the plant is to be commissioned in 2025. Apart from the annex, the parties also signed a multi-year servicing agreement.

Before the annex was signed, CCGT Ostrołęka had acquired the assets necessary to complete the gas project. Together with the annex that has initiated the construction of the new CCGT plant in Ostrołęka, the so-called contract change document was signed. It provides the general rules and conditions for introducing changes to the contract, and for other settlements between the contractor and the contracting entity.

Altering the contract also required an agreement on settling the previous coal investment. The investment is to be settled by the end of the year. It was very important that the parties agree on the maximum amount up to which the contractor can claim charges. The parties agreed the limit would be PLN 1.35 billion. So, officially this is how much the coal project has cost so far. The figure pertains to all of the works that have been done up to this point, not to the figure that needs to be paid. The agreed settlement will include the expenses that have been already made. This means the investors in the Ostrołęka C coal power plant, i.e. Energa from Gdańsk and Enea from Poznań, which has already withdrawn from the investment, have not spent more than PLN 675 million each.

Funding model together with PGNiG?

The funding model was one of the biggest issues the previous investment had to face. The money for the investment, i.e. PLN 5 billion, was not fully guaranteed, so the search to bankroll the coal investment was continued. Orlen has not revealed any details, but ensured that this time the money was enough. However, it is not clear whether it will come from the company’s own resources or whether bonds will be issued. It is to be decided upon in the coming weeks. Orlen does not preclude other forms of financing, or inviting new partners in this project. It is worth reminding that PGNiG signed an agreement on gas supply, so it’s possible that the gas company is the alleged partner.

PSE has changed the connection conditions, which previously pertained to the 1000 MW coal unit. On Friday, the 26th of June, Energa, owned by PKN Orlen, signed with GE Power an annex to the contract to build the Ostrołęka C power plant. Orlen wants to acquire a capacity contract for the plant already this year. The company is hoping that it would not pay any penalties for breaking the contract for the coal unit. Orlen has analyzed various scenarios of CO2 emission allowances and energy and gas prices. The company claims that the investment makes sense in all of them. At the beginning of the year, Orlen applied for a general certification of the Ostrołęka project, which means it will be able to take part in the auctions at the capacity market in December this year. The market is a support mechanism for power plants that are of vital importance to the country’s energy security. Partially its cost is covered by the capacity fee, which is included on the electricity bill. When asked about the potential penalties for failing to uphold the coal unit capacity contract, Orlen stressed that the Act on the capacity market has been updated. In the company’s view the fact that it is building the facility in the same location, means the power grid will benefit all the same. Orlen is hoping that thanks to the fact that a gas power plant will be more flexible and will generate significantly less emissions, the company will not have to pay the penalties for not breaking the previous agreement.

The old capacity contract was to enter into force in 2023, and the new one will be binding as of 2025, once the gas power plant in Ostrołęka will be ready. Already in 2020 Orlen was expecting that the investment may be delayed. In December 2020 Jarosław Dybowski argued at the Sejm that the supposed penalty may be a lot lower than PLN 500 million.

The reorganization plan for the energy sector is ready. Not everyone likes it
Energy
Seven – that’s how many pages the presentation on the future of the energy sector has, this includes the merger of PGE, Tauron and Enea […]
More