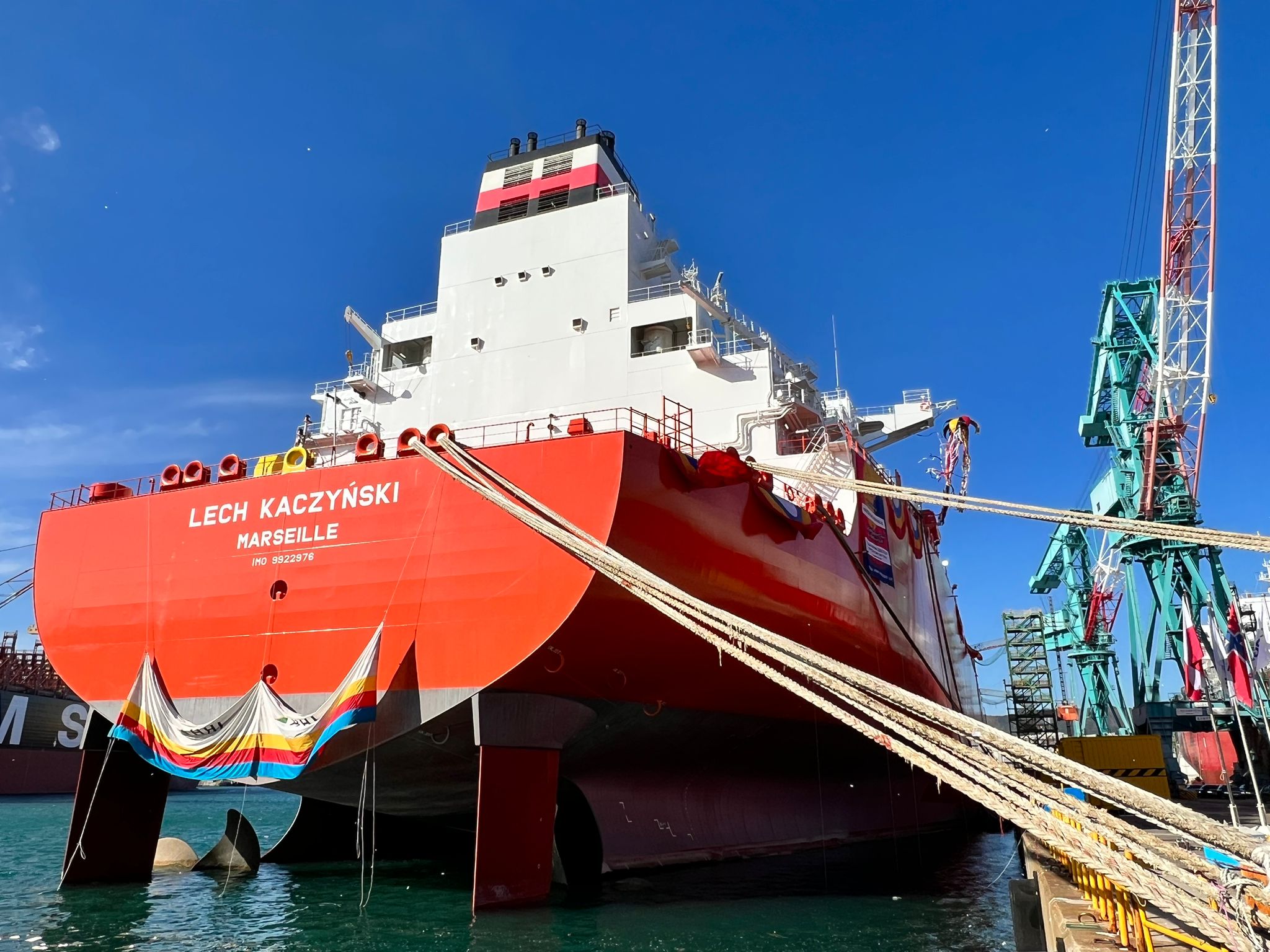 As early as next year, Orlen Group will have for its exclusive use two custom-built LNG carriers. By the end of 2025, the number of such gas carriers will increase to eight. Having its own fleet of LNG vessels, the Orlen Group will be able to efficiently manage shipments to Poland and strengthen its position on the global LNG market.

The first ship was named “Lech Kaczyński”, and the second “Grażyna Gęsicka”. This is a symbolic gesture of remembrance to the late Prof. Lech Kaczyński, President of the Republic of Poland, and the late Grażyna Gęsicka, Minister of Regional Development, for their commitment to Poland’s energy independence and the country’s economic development.

– For energy security of Poland, it is crucial to diversify the supply of oil and natural gas – the latter we already import one hundred percent from outside Russia. This is the result of a consistently implemented LNG imports strategy. The shipments of liquefied natural gas already cover almost thirty percent of our country’s demand. LNG supplies are secured not only by means of contracts, but also by developing our own fleet. Custom-built vessels for our exclusive use guarantee the stability of transport and strengthen the company’s position on the global LNG market – says Daniel Obajtek, CEO of PKN Orlen.

Both vessels were built by Hyundai Heavy Industries – a leader of the global shipbuilding industry. The construction of each ship took about 18 months. They are the most modern vessels of their kind in the world.

The Orlen Group will use the ships under a long-term charter deal with Knutsen OAS Shipping of Norway, specialising in the maintenance and commercial operation of LNG tankers. Under the contract, the shipowner will be responsible for manning the chartered vessels and keeping them in good technical condition, while PGNiG Supply & Trading will have full commercial control over their operation.

– Knutsen OAS Shipping is very pleased to have established a long term relationship with PGNiG Supply and Trading. These safe, reliable and state of the art environmentally friendly LNG carriers will help them to succeed in their LNG business – says Mr. Trygve Seglem, the Owner of Knutsen Group.

The term of the charter is 10 years with an extension option. Each vessel can carry a cargo of about 70 thousand tonnes of LNG, equivalent to about 100 mcm of regasified natural gas. That volume is equivalent to the annualised average weekly consumption by all Polish households. This size of the ordered vessels will make them versatile and capable of loading and unloading gas also at ports that cannot be entered by the largest LNG carriers. The first two ships of the ORLEN Group’s fleet were built using cutting-edge engineering solutions to improve the economics of LNG transport. One of their features is a very low rate of boil-off losses. What is more, boil-off gas can be reverted to liquid state thanks to onboard reliquefaction systems. The vessels’ engines can run on both diesel oil and natural gas, which will ensure their compliance with environmental standards for maritime transport well into the future.

“Lech Kaczyński” has already undergone sea trials and will enter service under the Orlen colours early next year, while “Grażyna Gęsicka” will deliver its first LNG cargo in the second half of next year. The vessels will be used to deliver LNG purchased under both long-term contracts and spot contracts on the free-on-board (FOB) basis, where the buyer assumes responsibility for collecting and shipping the goods.

Stępień: Talks on speeding up the FSRU project in the Gdańsk Bay are underway (INTERVIEW)
GAS LNG Nord Stream 2 Norwegian Corridor
“Due to the situation in Ukraine, in Europe, talks on accelerating the construction of new LNG terminals have started. Also, in Poland, we are […]
More

Poland in talks with Qatar to import more gas outside of Russia (ANALYSIS)
GAS LNG
Together with the United States, Qatar is the largest supplier of liquefied natural gas to Europe. This means it plays a crucial role in decreasing […]
More

Will Orlen enter the LNG market thanks to Lotos?
GAS LNG
The LOTOS capital group, which may soon become part of PKN Orlen has recently completed the feasability study for the construction of a small-scale […]
More

Polskie LNG offers capacity for the LNG terminal after expansion
GAS LNG
Polskie LNG S.A., the owner and the operator of the President Lech Kaczyński LNG Terminal has launched the 2020 Open Season Procedure for market […]
More