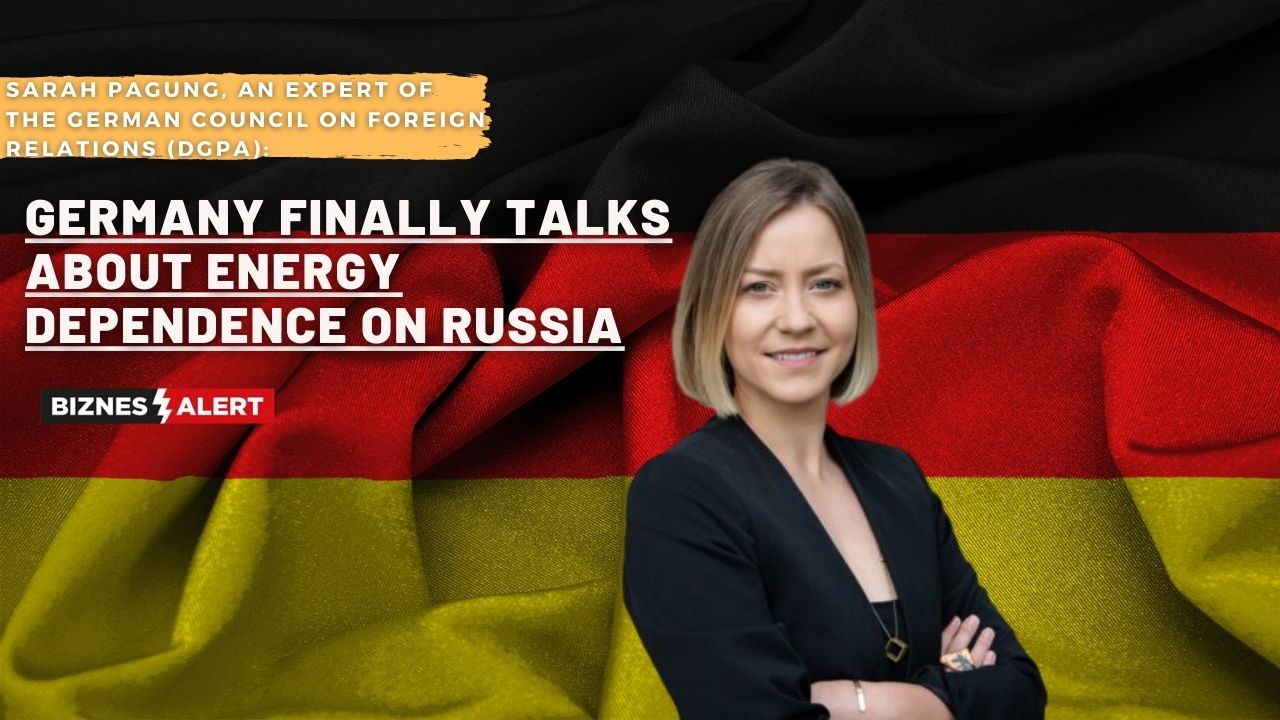 During Sunday’s special session of the Bundestag, the German government announced a change in relations with Russia, which is essential for German thinking about the energy transformation. Sarah Pagung, an expert of the German Council on Foreign Relations (DGPA), talked about it in an interview with BiznesAlert.pl.

BiznesAlert.pl: After Sunday’s session of the Bundestag, during which declarations were made about support for Ukraine in the war with Russia and the reduction of energy dependence, can we speak of a real shift in Germany’s policy?

Sarah Pagung: I am an optimist on this matter. Even before this debate, it seemed that the German government’s aid to Ukraine would be limited to a similar level as in 2015, but it turned out that German politicians decided to tighten the course by announcing a defense budget of EUR 100 billion, supplying arms to Ukraine and introducing sanctions against Russia. These measures show that Germany is indeed changing its policy towards Russia. We will see what it will look like in the longer term, it will also depend on what Russia’s actions in Ukraine will look like in the coming weeks.
Is the change in the policy of the German government due to the reaction of Berlin to the invasion of Russia, or is it also the result of pressure from NATO and the European Union?
I think both of these factors worked. Even before the invasion, the pressure from NATO and the European Union was enormous. There was also pressure from the German public. Until the invasion, there were strong voices in the government against the supply of military equipment or tougher sanctions, but this changed with the attack by the Russians. This is a change not only in foreign policy, but also in the way the government thinks about the war in Ukraine. This is visible not only in the government, but also in the Die Linke party, which is usually pro-Russian and reluctant to defense issues. There is no such resistance to the sanctions in this party now. It also proves that a change is taking place.

In the first days of the Russian aggression, the Nord Stream 2 certification was suspended. What do you think is the fate of this project?

In my opinion, it is not known whether this gas pipeline will eventually become operational. Firstly, because the certification has only been suspended due to concerns about compensation for the companies involved. The difference between an actual stopping and a certification halt is only technical. Besides, even if Germany wanted to finish this project, the US sanctions are still in charge, and I do not see any possibility that they would be lifted.

Recently, Foreign Minister Annalena Baerbock said that Germany’s coal exit will be delayed, and that this will be the price of independence from Russian gas. What is your comment on that?

The German government is forced to think about reducing its dependence on gas from Russia, and perhaps also about total independence from it. The problem is, this dependence is high. We do not have proper LNG infrastructure, at least until next winter, to compensate for this. It will be necessary to reduce gas and energy consumption in general, but above all, to look for other sources. The problem is also that maintaining coal contributes to climate change, and the discussion of the nuclear shift in Germany is quite difficult. The problem with the energy supply will be visible until next winter. There may be a situation where we will have to decide either on coal or on nuclear power, and the Minister of Economy Robert Habeck said that for safety reasons it is impossible to extend the operation of nuclear power plants that are still operating. It will therefore turn out that the Minister of Economy on behalf of the Greens will extend the operation of coal in Germany.

Can it be said that in Germany a debate is starting about whether the decision to abandon the nuclear power plant was right?

There will certainly be a debate on this in Germany. On the other hand, it will be impossible to maintain the nuclear power over the next winter for safety reasons. Most of the nuclear power plants in Germany have already been shut down. It would take huge investments to go back to the nuclear power. A question arises, therefore, if Germany is to invest a lot of money in the energy transition, then is it not better to allocate this money to the development of renewable energy.

What does Germany itself think about energy dependence on Russia at the moment?

It’s hard to say at the moment, because the last polls on this subject were carried out two weeks ago. However, at the moment, judging by the tone of the public debate, there is a much greater readiness to give up gas imports from Russia. At the moment, however, German public opinion is shocked by the war, and many fear that rising gas prices will translate into rising energy prices, and that any other alternative, such as coal or nuclear, also has its drawbacks. However, I am afraid that this debate will soften once the first shock of Russia’s invasion of Ukraine has passed.