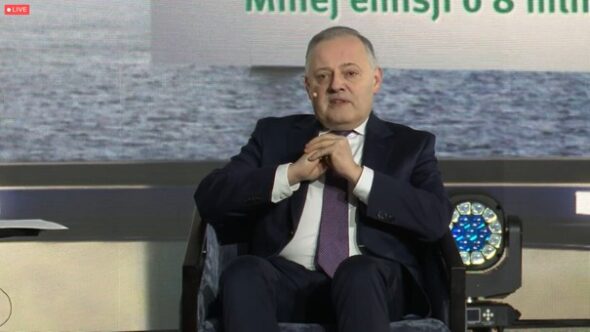 What goes on in Poland on the 12th of February.

Polska Grupa Energetyczna (PGE) has signed an agreement with Denmark’s Orsted to establish a joint venture for the implementation and operation of two offshore wind projects. The estimated total cost of the investment is PLN 35-40 billion. It will be implemented in the project finance formula. The new offshore wind farms will start generating power in five years.

PGE and Ørsted announced that they had signed an agreement to set up a 50/50 joint venture to develop, build and operate two offshore wind projects in the Baltic Sea with a total capacity of up to 2.5 GW. Orsted will take up new shares representing 50 percent of the share capital in two projects for PLN 657 million. The transaction should be closed in the first quarter of 2021, after Poland’s Office of Competition and Consumer Protection (UOKiK) approves the concentration. After that, PGE wants to start the procurement process, including purchasing turbines. The company has also identified one hundred Polish companies that can provide services as part of the supply chain.

Orsted is to be responsible for the implementation of offshore investments, PGE will handle the onshore part, and all investment decisions are to be made jointly and unanimously. The final investment decision will be made in 2023, and the first electricity will flow in 2026. Baltica 3 is expected to start producing energy in 2026, and Baltica 2 in 2027. “Ørsted will make the final decision on implementing the joint wind farm project in the Baltic Sea after calculating all the costs and learning about the final value of the contract for difference, which can be determined in 1.5-2 years,” Wojciech Dąbrowski, PGE CEO, said.

Dąbrowski emphasized that the construction of the two wind farms is to be carried out in the project finance formula. Thanks to this, the company will not incur liabilities on its balance sheet. He confirmed that American investment funds were interested in investing in offshore wind farms in Poland. Dąbrowski also announced that the company will soon announce a tender for a financial advisor that will design and implement the entire investment financing process.

The CEO was asked about the investment costs. “The estimated cost of building 1 MW of power at sea is PLN 13 million, and it can be assumed that 2.5 GW is PLN 35 billion. We estimate the cost to be between PLN 30 and 40 billion, and our share will amount to 50 percent,” said Dąbrowski during a videoconference about the deal. Importantly, in terms of costs, PGE submitted its offshore project to the National Reconstruction Plan. Both PGE projects will be able to apply in the first phase of the offshore wind energy support system for wind farms with a total capacity of 5.9 GW. He stressed that the company will submit the necessary documents by the end of March this year to obtain a decision on receiving support for the first two projects.

“As PGE, we want to gain experience and competencies in the offshore sector, learning from partners that already have them. The partner was selected through a tender procedure, Orsted submitted the best offer,” he said. He indicated that a number of signed contracts concern the comprehensive implementation of the investment, covering the period of its preparation, implementation, operation, maintenance and service. By 2040, the PGE Group wants to have at least 6.5 GW of installed offshore capacity and is interested in further acquisitions, as well as building its own RES projects.