The European electricity market is currently undergoing structural challenges to security of supply, due to lack of capacity and funding restraints. New investments are insufficient to bridge the gap. It raises several questions about the future of capacity mechanisms in the EU – how should they be designed not only to ensure security of supply whilst preserving competition in the Single Market, but also to support market reforms, RES integrations, promotion of demand response.

During the Euractiv workshop “EU’S CLEAN ENERGY PACKAGE: ARE WE ON THE RIGHT TRACK?” the representatives of the European Commission, upcoming Austrian Presidency, the Polish Electricity Association (PKEE) and the European Environmental Bureau discussed the future of the Electricity Market, highlighting the need to provide market participants with predictable and coherent legislative framework. Mr Florian Ermacora, official of the European Commission, stated that decarbonisation goal is the main driver for the package, however what matters for the end consumer is also security of electricity supplies. The best deal for the consumer is the internal energy market and consumers are not willing to pay any price for decarbonized energy, he added. Upcoming Austrian Presidency representative Mr Benedikt Ennser from Austrian Federal Ministry of Sustainability admitted that the key political discussions within Trilogues between the Parliament and the Council will concern the capacity mechanisms including emission performance standard (EPS 550) and the bidding zones review. Representative of the PKEE, Mrs Monika Morawiecka suggested to co-legislators to aim at reaching the final common positions that would help all Member States affected by structural problems i.e. congestion or carbon dependency to have transition periods, but without double standards. “We need to have financial instruments for transformation and the proposal to introduce an emissions threshold of 550 grams of carbon dioxide would effectively invalidate the capacity mechanism in Poland approved by the European Commission last month” – said Mrs Morawiecka, stressing that Clean Energy Package should be coherent with this decision.

Polish capacity market will be technology neutral, open for cross-border participation and based on auctions to provide consumers with the lowest prices. “We do want to transform, we are doing that, we are terminating new coal investments, we are moving to another generation technology. Offshore wind meets the requirement to grow the share of renewable sources and can meet this need relatively quickly – in my opinion Poland can have 3 – 3.5 GW of offshore wind capacity in the Baltic Sea by 2030. What we need is predictable environment to do this, and we need funds.” – continued Mrs Monika Morawiecka.

However, for security of supply reasons and for allowing all European consumers to equally benefit from this transformation, no double standards should be allowed. Participants of the workshop presented regulatory measures needed for sustainable transition. PKEE believes that equal treatment of all capacity mechanisms – markets and strategic reserve – is needed. The legislators should take into account the acquired rights and certainty of investments. “Approving the idea of strategic reserves in its current form is like calling out names of the member states that can have EPS 550 gr/kWh exceptions. Security of supply is just as important as climate objectives and EPS 550 impacts it negatively. Why the strategic reserve in Germany is not bound by EPS 550 standard, while more technology neutral and market based capacity market mechanisms introduced in France, Ireland, Italy and the UK supposed to apply this standard? In case of Poland it will have a detrimental effect on security of supply.” – said Mrs Monika Morawiecka.
PKEE concluded the workshop by reminding that predictability and stable regulations are needed for investors to ensure both the modernization toward low-emission as well as security of supply. 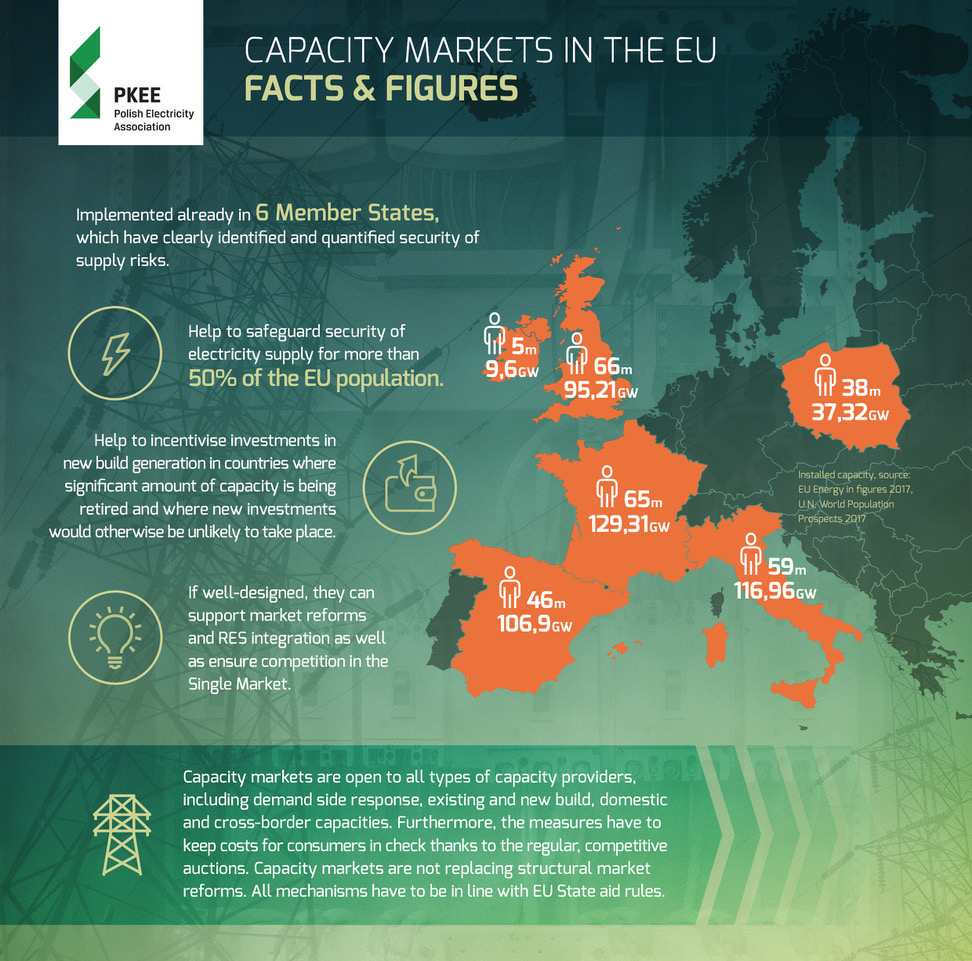 PKEE completed a series of conferences on capacity market in Brussels
Energy
Fist Madrid, then Paris and Rome, and the summary in Brussels. The Polish Electricity Association has completed in the capital of Belgium the series […]
More

PKEE: Capacity market will reduce the risk of blackout
Energy
The Polish Electricity Association welcomes today’s decision of the Commission, in which the EC has confirmed that the assumptions of the Polish […]
More