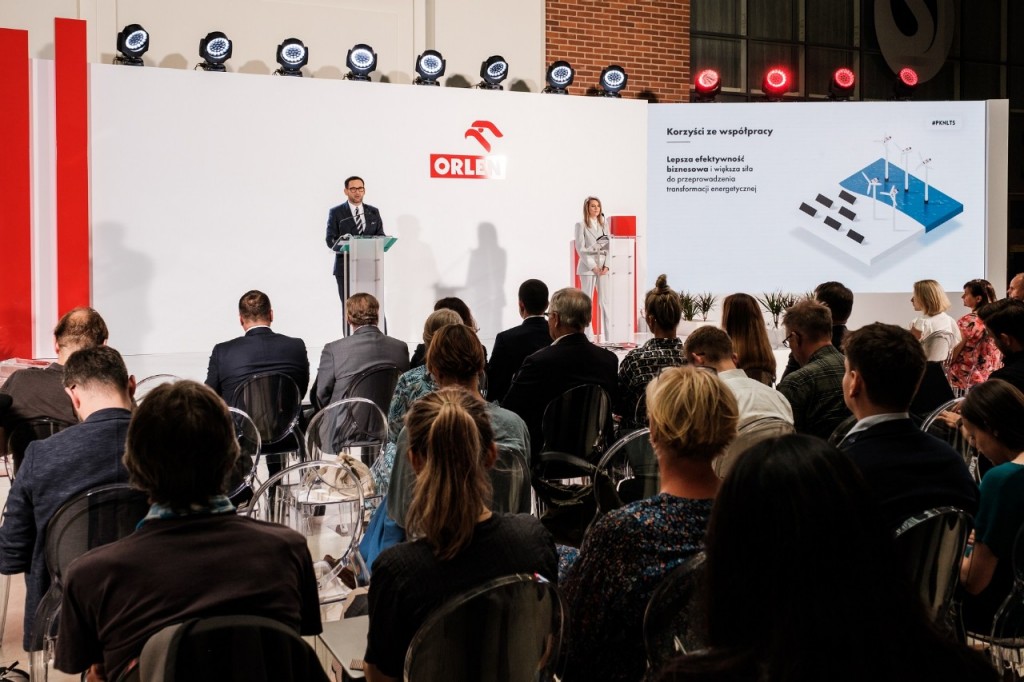 PKN Orlen has secured the European Commission’s clearance of its intended merger with the Lotos Group. Closing an important phase of the merger process, the antitrust clearance marks a leap forward in building a strong multi-utility group that will effectively carry out the energy transition and ensure Poland’s energy security and independence in terms of feedstock supplies. The new Orlen Group will be based on a fully integrated value chain, from upstream exploration and production, through refining, petrochemical production and advanced power generation, to retail. This means long-term profits for the companies and their shareholders, stability of energy supplies for the Polish economy at the lowest possible prices, a wide range of attractive services for customers, and even greater support for social initiatives. The European Commission’s approval means its full acceptance of the agreements negotiated by PKN Orlen as well as the partners with whom these agreements will be implemented. It also confirms that the merger will in no way affect competition in any area of business activity, neither in Poland nor in the region. Final consent to the merger must be granted by the shareholders of the two companies during their respective General Meetings.

– This is a pivotal moment for PKN Orlen, the Lotos Group and the Polish economy. The European Commission’s clearance has brought us much closer to stepping up joint investments of key importance to Poland and the entire region. The merger is a very challenging process, but we have determinedly followed it step by step, aware of the importance of the transaction. We have stressed since the very beginning that the merger is necessary not only to secure the business future of both groups, but also in terms of shareholder value creation, Poland’s energy needs as well as the interests of retail customers and local communities. Scale does matter. The entity to be formed based on the assets of PKN Orlen, the Energa Group, the Lotos Group as well as PGNiG will be the largest company in Central and Eastern Europe, capable of effectively facing the challenges of energy transition and implementing zero- and low-carbon power generation projects, worth billions of Polish złoty. We will be playing in the first league of European fuel and energy companies, which will strengthen our bargaining position when negotiating raw material supplies or access to technologies. In this way we will ensure sustainable, long-term growth of the combined Group, and security of energy supplies for Poles – said Daniel Obajtek, President of the PKN Orlen Management Board.

The merger will be effected through the acquisition of Grupa Lotos by PKN Orlen. This means that, upon the acquisition, the existing shareholders of Grupa Lotos will take up new shares in the increased share capital of PKN Orlen and become the latter’s shareholders. As a result of the merger between PKN Orlen and Grupa Lotos, the Polish State Treasury’s equity interest in the combined entity will increase to approximately 35 percent. Assuming a subsequent merger with PGNiG, this stake will increase significantly.

The merger between PKN Orlen and the Lotos Group is linked inextricably to the energy security of Poland and the entire region of Central Europe, including Lithuania, Latvia, Estonia, the Czech Republic and Slovakia. The merger will create a single, strong multi-utility player with annual revenue of approximately PLN 250 billion, which will successfully carry out business on a competitive market and provide services to approximately 100 million customers in Europe, ensuring security of fuel and energy supplies.

Its merger with the Lotos Group and PGNiG will strengthen PKN Orlen’s position as the leader in energy transition through investments in low- and zero-carbon energy sources. By investing in green energy, including offshore and onshore wind farms and photovoltaics, as well as alternative fuels, small modular reactors and biomaterials, the Group will significantly contribute to reducing Polish economy’s dependence on fossil fuels.

The merged Group will also seek to achieve operational excellence in the existing business areas such as upstream and refining. Integration of the assets currently owned by different entities will bring about efficiency improvements, while the strategic partnerships will contribute to enhanced energy security of Poland and the whole of Central Europe, a thing of utmost importance in the current geopolitical context.

A vital part of the merger between PKN Orlen and the Lotos Group is the agreement with Saudi Aramco, which means tighter bonds between PKN Orlen and a stable partner, the world’s largest oil company with extensive experience and technologies that will enable further strong growth of the combined entity. Agreements on joint petrochemical and R&D projects have also been signed. An added benefit of the partnership forged with Saudi Aramco will be an increase in crude oil deliveries. Following the merger with the Lotos Group, supplies from the Arabian Peninsula will cover as much as 45 percent of the new Orlen Group’s overall demand. For the Group this arrangement will mean a reliable source of crude oil of sustainably high quality, and for the Polish economy – it will mark further progress in the efforts to diversify crude oil supplies.

The merger between PKN Orlen and the Lotos Group will also bring tangible benefits in retail, creating an occasion to replace some of the Lotos fuel stations with foreign ones. Consequently, a total of 185 retail sites with business potential comparable to those covered by the merger remedies will be added to the Orlen portfolio. As part of the transaction the Orlen Group will acquire 144 fuel stations in Hungary, securing an over 7 percent share in the market and establishing itself as the country’s fourth largest fuel retailer in terms of the network size. PKN Orlen’s share in the Hungarian wholesale market is already at 5 percent in the case of gasoline and 4 percent in the case of diesel oil. As a result of the merger with the Lotos Group, PKN Orlen’s Slovak network will also grow to include 41 new locations. On the other hand, Hungary’s MOL Group, PKN Orlen’s partner in implementing the remedies in retail, will buy 417 of the approximately 8 thousand fuel stations now operating in Poland, which will give it an approximately 5 percent share in the retail market. The deal will not in the least affect Poland’s fuel security – quite the contrary, it may enhance competitiveness in fuel sales to the benefit of customers. What is more, the transaction involves a contract for the supplies of fuel produced by the refineries in Gdańsk and Płock to the divested stations.

PKN Orlen has also engaged with Unimot as a partner in carrying out the merger remedies in logistics. The agreement entered into between the two companies covers the sale of nine fuel terminals with an aggregate storage capacity of 350 thousand cubic metres, including five locations of Lotos Terminale: in Czechowice-Dziedzice, Jasło, Piotrków Trybunalski, Poznań and Rypin, and four of PKN Orlen: in Bolesławiec, Szczecin, Gutkowo and Gdańsk. These depots are not regarded as strategically important to PKN Orlen, accounting for a mere 6,7 percent of Poland’s total fuel storage capacity. As a result, the Group will retain a 54 percent market share.

Following the merger, the scale of capital expenditure to develop individual businesses formed by PKN Orlen, the Lotos Group and – in the future also – PGNiG, will grow. In 2021 alone the Orlen Group spent on capex a record amount of PLN 9,9 billion, while this year the figure will break another record of PLN 15,2 billion. This in turn will translate into a higher contribution to the state budget. In 2021, PKN Orlen contributed almost PLN 35,5 billion in various taxes and levies to the state. Its cumulative contribution from 2018 to 2021 came to about PLN 143 billion.

The increased scale of the combined Group’s operations will also translate into stable tax revenues for the local budget of Pomerania. In fact, major tax receipts will remain in Gdańsk: property tax of about PLN 100 million per year will continue to be paid, and so will the personal income taxes of the Group’s employees, which are also allocated to the local budget.

Czyżewski: Orlen taking over Lotos is a response to global trends on oil and liquid […]
Energy
In order to make European refineries profitable again, further cuts in capacity are necessary. By 2025 they are estimated at 1.35 million barrels per […]
More

PKN Orlen moves a step closer to merger with Lotos Group
Energy
PKN ORLEN has just filed a formal application for the European Commission’s approval of its proposed acquisition of LOTOS Group. The completion of […]
More