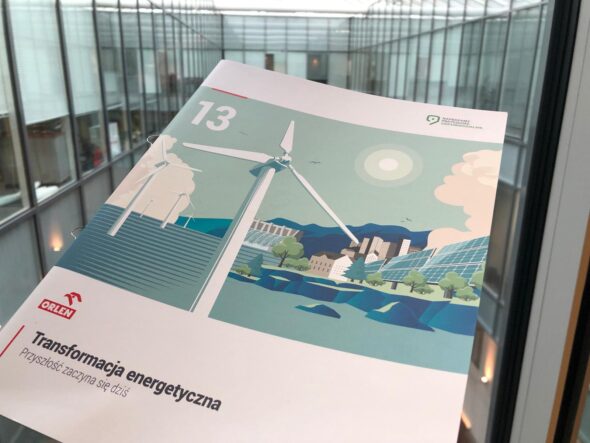 PKN Orlen is a fuel company that produces and sells oil products in Central and Eastern Europe. Within a decade it wants to transform into a multi-utility powerhouse that profits from generation and sale of power from renewables, and from processing oil for the chemical industry – writes Bartłomiej Sawicki, editor at BiznesAlert.pl.

According to PKN Orlen’s latest Strategy, the company will invest an estimated PLN 140 billion by 2030. Out of that PLN 85 bn will be spent on new areas of interest, including renewable energy and advanced petrochemicals. The company will drop PLN 55 bn on improving efficiency and optimizing its existing petrochemical and refinery assets. The strategy also talks about investing PLN 30 bn in sustainable development.

The investments will result in the following: decarbonization, improving energy efficiency, developing renewable energy sources, increasing capacity of biofuels and biomaterials, developing recycling, building a brand on the alternative fuel market with a focus on electromobility, hydrogen and gas fuels. If all of those 60 investments are implemented, Orlen will reach a complete climate neutrality in 2050. In 10 years the firm wants to reduce CO2 emissions by 20 percent in the refineries and petrochemical sector and by 33 percent in its power generation branch.
“Orlen’s strategy is worth PLN 140 bn, about 40 percent will be spent on refineries, petrochemistry, retail sales, upstream and energy distribution. About 50 percent will be devoted to building new branches of business, and the key are new energy sources and fuels, as well as low-emission petrochemicals, which will be an important source of revenue from oil processing. We will allocate 10 percent to promising investments, such as hydrogen, recycling, research and development,” Daniel Obajtek PKN Orlen CEO told journalists during a conference.

According to the strategy, PKN Orlen wants to secure its own, increasing demand for gas at a level of 20 percent and a daily production of hydrocarbons above 50 thousand boe/d. In 2030 EBITDA will be at about a billion zloty, while investments will amount to PLN 0.9 bn a year. The future of Orlen’s Canadian assets is also interesing. As of today the company is not planning to sell its upstream assets in Canada. Mr Obajtek said that the company will follow a strategy of “cautious communication”, adding that this was not a good time to sell the assets. However, it will not increase investments in developing Orlen Canada. The CEO admitted that in reality the company invested about 20 percent of what had been originally planned three years ago. “From today’s perspective I can say that it was a strategically right decision” he stressed. He also added that currently the Canadian subsidiary was able to fend for itself and Orlen would like things to stay that way. However, the company also claims that delivering the natural resources from Canada to Poland was “fiction impossible to realize”.

Mr Obajtek announced that Orlen would adopt the remedial measures imposed by the European Commission in order for the company to be able to take over LOTOS before the end of the first quarter of 2021. “Then, we will sit down with those partners who will propose the most interesting offers,” Mr Obajtek specified. When it comes to taking over PGNiG, Orlen is planning to file an application with the European Commission about the merger in the first quarter of 2021. “The application to the EC on PGNiG will be filed in the first quarter of 2021. I assume it will be at the break of January and February,” Mr Obajtek stated and clarified that taking over PGNiG was not included in the company’s new strategy, because Orlen was waiting for the Commission’s approval. “We did not include PGNiG in the strategy, because we did not want to do it without EC’s consent, but we are very determined to go through with this process, and we believe that it will be a lot easier than in case of the LOTOS Group,” Mr Obajtek added, and stressed that after the EC says ‘yes’, PGNiG’s results will be added to the company’s strategy.

The Orlen Group’s strategy by 2030 says that power generation will be the key area of development for the company. The goals will be pursued through investments in renewable energy sources (RES), supplemented with gas. By 2030 the company wants to have 2.5 GW in installed RES capacity. Offshore wind farms are to contribute 1.3 GW. Mr Obajtek stressed that the fact that the Council of Ministers had adopted the draft Act on offshore wind farms would significantly improve the company’s ability to sign a contract with a partner that would help with developing that technology. It will hapen soon. The company also wants to add to its RES portfolio onshore wind farms able to generate 800 MW. The investment will be pursued, provided that the so-called Proximity act will be liberalized. This means, not only acquisitions, but also expansion of the existing wind farms, e.g. Przykona, are on the table. PV will complete the portfolio.

The group wants to increase the installed capacity in gas-fired power plants from 1.1 GW to 2.0 GW. By 2020, 20 percent of the gas it will use, will come from its own deposits. It is worth stressing that PGNiG’s assets were not included. This pertains to, among others, new facilities in Gdańsk, Grudziądz and Elbląg, as well as the 750 MW Ostrołęka C power plant, which will run on gas. That investment is currently being settled, and the new contract depends on how the “coal agreement” is dealt with. Enea is necessary to do this, but this company may not be present in the gas project. However, Orlen will not comment on these assumptions until an agreement with the contractor is signed.

The petrochemical segment is to earn half of Orlen’s profits by 2030 from oil processing for the chemical industry. The operational goal is that 25 percent of the portfolio will be constituted by specialized products, capacity to recycle plastic will stand at about 0.3-0.4 m tons, while in 2030 EBITDA is to be at around PLN 7 bn and investments are to be at PLN 4.4 bn. Orlen wants to expand olefins as well as other basic products, polymers and specialty products, such as phenol and aromatic derivatives. The share of specialty products will go up from 16 to 25 percent.

The company, whose HQ is in Płock, will increase the availability of alternative fuels through, among others, providing at least 1000 EV fast charging stations and growing sales of hydrogen fuel and LNG/CNG. It is planning to develop its retail and cafe chain outside of fuel stations and expand its own network of parcel collections, as well as e-commerce thanks to buying the RUCH chain. The goal is to increase the margin of the non-fuel sector within the company by 50 percent in comparison to 2019.

How much is it?

PKN Orlen estimates that in total it will need PLN 205 bn by 2030 to implement its strategy. That figure includes about PLN 140 bn that will be invested, about PLN 40 bn needed to pay out the dividend and pay taxes, and about PLN 25 bn to cover other expenses.

The company’s financial capacity by 2030 is estimated at about PLN 275 bn. This includes PLN 195 bn of money transfers from operational activities by 2030, about PLN 50 bn as part of additional debt in the 2030 perspective, about PLN 30 bn available thanks to alternate ways of financing, such as, e.g. project finance or EU subsidies.

What is driving Orlen’s new strategy?

I summarized the most important points of the new Strategy, but that is not the only document that was presented on 30 November. Orlen also published a report titled “Energy Transition. The Future Starts Today,” which explains the justification behind the Strategy and includes a wider look at the energy sector in Europe. In it, Orlen compares itself to Europe’s biggest companies (Repsol, Shell, BP, Equinor), which similarly to the Polish giant declared they would be climate neutral by 2050 and would limit emissions in the refinery sector by 15-40 percent. Orlen promised a 20 percent reduction. All companies of this kind are investing in RES and hydrogen, the majority, apart from Equinor, is also shelling out for gas and biofuels. Therefore, Orlen is joining a trend set by Europe’s fuel giants. Mr Obajtek stressed that the European Green Deal would introduce new conditions for conducting business, and one should adapt to them to survive whatever one may have heard about the genesis of the green policy. Apart from the external circumstances, Orlen’s strategy is also aimed at implementing Poland’s Energy Policy by 2040, according to which, in 20 years, 40 percent of power will be generated from RES, 17 percent from gas and 14 percent from nuclear energy.

Biedroń: unblocking renewables is a top priority (INTERVIEW)
Climate Policy Energy
As part of our series of interviews with the 2020 presidential candidates we have talked to Robert Biedroń, a candidate representing the Left party […]
More