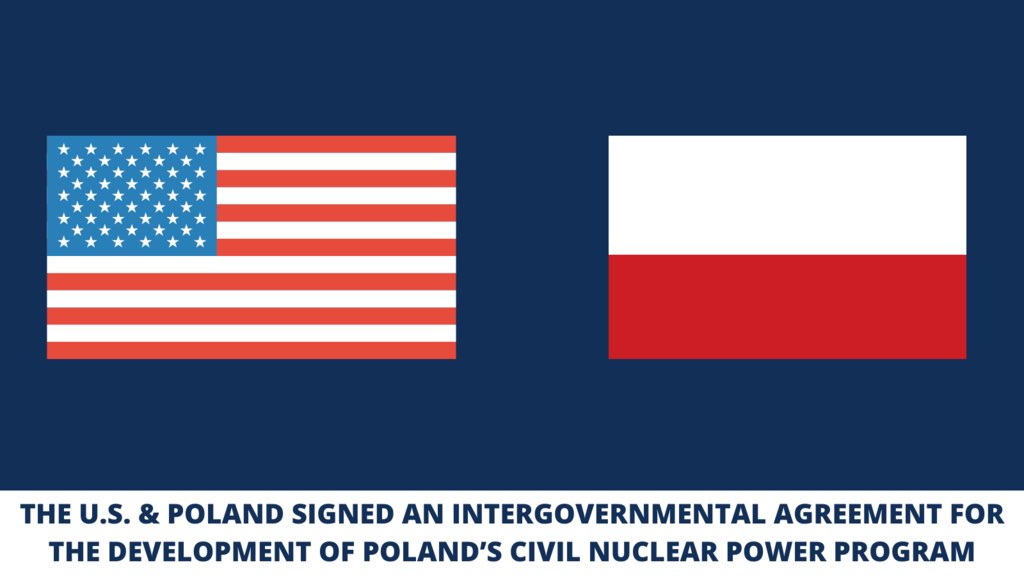 Today, U.S. Secretary of Energy Dan Brouillette and Poland’s Secretary of State for Strategic Energy Infrastructure Piotr Naimski discussed the signing of the first Intergovernmental Agreement to cooperate on the development of Poland’s civil nuclear power program. This 30 year Agreement, the first of its kind, represents an enduring energy bond between the United States and Poland.

President Trump promised the people of Poland energy security, stating unequivocally “we are committed to securing your access to alternate sources of energy, so Poland and its neighbors are never again held hostage to a single supplier of energy.” This Agreement delivers on the President’s promise by strengthening the overall strategic energy partnership, expanding Poland’s energy mix, and reducing Poland’s energy reliance on coercive suppliers.

The Agreement provides that over the next 18 months, the United States and Poland will work together on a report delivering a design for implementing Poland’s nuclear power program, as well as potential financing arrangements. This will be the basis for U.S. long-term involvement and for the Polish government to take final decisions on accelerating the construction of nuclear power plants in the country.

Beyond that, the agreement defines areas of cooperation for decades to come, both in support of relevant business entities, as well as government-led efforts ranging from regulatory, research and training, through developing supply chains, raising public awareness, to joint cooperation on projects in Europe.

Secretary Brouillette highlighted the U.S. nuclear industry’s continued interest in providing clean, reliable, and resilient nuclear energy to Poland as a means to strengthen energy security in the region. Minister Naimski recognized that, for Poland, this agreement is as much about clean energy and its security of supply as it is about wider geopolitical security, long-term economic growth, and technological advancement in Poland.

“The U.S. is committed to working with Poland to advance its national security, its regional security, and its democratic sovereignty,” said U.S. Secretary Brouillette. “The Trump Administration believes the key to energy security is energy diversity – a diversity of fuels, sources, and routes. Nuclear will provide a clean and reliable supply of electricity to the people of Poland, as well as enhance their energy diversity and security. The next generation of nuclear energy must be a part of the energy security conversation with our allies in Europe and around the world.”

Poland’s Secretary of State for Strategic Energy Infrastructure, Piotr Naimski underlined that for Poland “this agreement is not only about clean energy and its security of supply. Poland sees this strategic cooperation in a wider context.  It is about geopolitical security, long-term economic growth, technological advancement, and development of a new industrial sector in Poland.”

“This agreement marks several major milestones, not only does it strengthen Polish-American relations, but it is an announcement to the rest of the world that America is back in the nuclear business, thanks to U.S. cutting edge technology.  Nuclear energy has never been safer, more affordable, or more flexible.  We are ready to help our partners achieve energy security while cleaning up the environment by providing both technology and financing,” said U.S. Ambassador to Poland, Georgette Mosbacher.

Poland’s Ambassador to the U.S., Piotr Wilczek shared that “Poland wants USA to be the strategic partner in this program.  Given the time it takes to build, operate, and decommission nuclear power plants, this partnership would represent a strategic choice for the next 100 years.”

This historic agreement was signed by Secretary Brouillette on October 19 and will be signed by Minister Naimski once it is received in Warsaw, Poland. It will become effective upon the exchange of diplomatic notes between both countries informing each other that they have completed all applicable requirements for its entry into force.

Polish Briefing: A nuclear deal between Poland and U.S. in October