Piechociński: Polish energy industry may be a gateway for Asia to Europe (INTERVIEW) 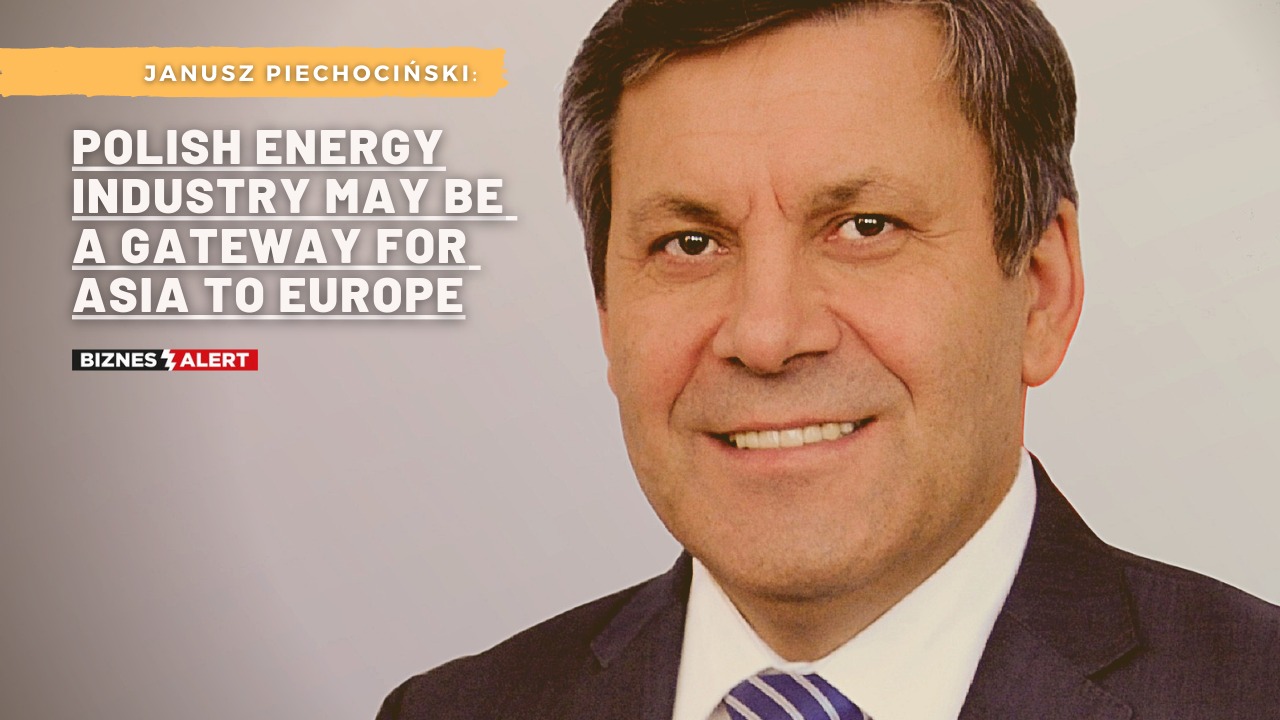 “For many Asian companies Poland may become a gateway to EU markets. So I am calling on being reasonably pragmatic, rational and active,” the former minister of the economy and current President of the Polish – Asian Chamber of Commerce Janusz Piechociński, said in an interview with BiznesAlert.pl.

BiznesAlert.pl: Can Poland cooperate with Asian states in the energy sector?

Janusz Piechociński: Of course, and we already have good experiences in this area. We are a large coal producer, and we used to be one of the leading exporters of this raw material. Thanks to that, we developed an entire industry that supports coal production with advanced technologies and very renowned research institutes. This potential was and still is very precious, especially for countries that are facing the increasingly difficult problem of ensuring safe mining at greater depths. We went through this as well, but in the 1950s and 60s. This is why Polish technology and experience are attractive to producers, who are facing those problems today in Asia, especially in India or Vietnam. We also have a well-educated academic staff that researches the technology of mining and development of coal deposits. One could say that Poland as a state, still has a lot to offer when it comes to development and international cooperation with regard to energy projects based on coal, and technologies that limit the emissions produced by this fuel.

The second area of potential cooperation is improving energy efficiency. Back in the day we thought hard about cooperating with, among others, Australia and Uzbekistan in the context of coal gasification technologies. The potential for cooperation with Asia is huge, also when it comes to the power industry.

Is this true for nuclear power as well?

Of course. Asia has become much more technologically advanced than the old manufacturers of nuclear reactors. In the coming years China will have the highest number of new nuclear power plants in the world, all based on the latest technological solutions. At the same time France, Europe’s biggest nuclear power, continues to rely on old nuclear power plants. If we ask who installed the highest number of new nuclear reactors in the world in recent years not just on their territory, but across the world, the answer will be South Korea. In my opinion, in the near future a very competitive and strong offer from Korea will emerge, which will try to encourage Poland to choose its technology. It is worth stressing that Korea already has a strong presence in Poland’s energy industry, e.g. LG owns here a gigantic car battery factory, there are also SK and Dusan, which is building a modern municipal waste disposal plant in Olsztyn. This goes along with the latest decision made by the Korean government to support the international projects of the nuclear industry. This is a big opportunity for us, because it gives us the possibility to analyze various options and technologies, as well as the space needed to choose the best offer. Korea’s proposition also provides us with access to other technologies, not just nuclear.

Which technologies from Korea, apart from nuclear, could be of interest to Poland?

Not to brag, but in recent months, thanks to my decisions and the engagement of the Polish-Asian Chamber, we actively sought for Poland to be included on the list of ten most interesting countries for Korean investors in the area of innovation. In the second half of this year Poland is to be added to a list of states for which special business delegations from the area of new technologies are to be formed. This offers us the potential to develop business relations at different levels. Right now Korea is building the biggest offshore wind farm in the world and floating PV farms. We can also tap into the experience our Asian partners have to offer with regard to other areas in the energy industry.

You mentioned offshore wind farms, but this is not the only zero-emission power generation that is popular n Asia.

Yes, Asia and especially China is a tycoon when it comes to generating power from PVs. This country has 65 percent of the world’s potential in PV. Moreover, China is very engaged in developing technologies that allow to save power and be more energy efficient, e.g. new generation grids that minimize grid losses during power transmission. This includes the entire automatics of managing the grid and the impact of prosumer energy on it. In Poland we criticize smart meters because they are expensive, but we have to answer this question: how do we want to develop a mass, prosumer energy industry, not just based on individuals, but also on, e.g. energy cooperatives, without a power management system, without automation? Cooperation with, e.g. China, Japan and Korea as well as Germany or Denmark, gives us a chance to learn about the mechanisms and ways to solve problems that we will have to eventually face.

Is there anything else that could become part of the possible energy cooperation?

There is a number of things. Asia is very invested in developing hydrogen technologies and we want to do this as well. We want to generate clean and zero-emission hydrogen from renewable energy sources (RES). We have already become a European powerhouse when it comes electric car batteries thanks to, among others, Korean investments. In my view, we should start working with partners from the US and Asia as quickly as possible to build a battery disposal plant where, among others, rare earth minerals could be recycled. The same applies to waste disposal – investments in the thermal municipal waste disposal plant in Kraków, today Posco in Warsaw or Dusan in Olsztyn. Energy generation from waste is the only solution in view of the growing prices for waste disposal. Importantly, the fact that, e.g. Kraków’s Eko-Energia gained practical experience in this regard thanks to its cooperation with Asian companies, may propel Polish companies to other Central and Eastern European markets, and later on to the Commonwealth of Independent States in the east.

We also have the biggest coking plants in Europe, and thanks to Asian capital we could modernize and make them more efficient, especially in the context of the fact that coke is becoming increasingly more popular and the demand for this product is still substantial.

Interesting ideas about using lignite as agricultural fertilizer are also emerging. Such a fertilizer would be a completely natural product used to improve soil nutrition. The room for cooperation is huge, even unlimited.

When it comes to cooperating with Asia, political sensitivities often come into play. As a state we are very rooted in the Euro-Atlantic relations, so Asia seems to be an exotic partner.

I understand you are asking about security issues. As a NATO member, can we cooperate with Korea, Japan and Vietnam? My answer is that we can. Japan is in the process of signing a free trade agreement with the European Union, Korean investments have significantly altered our economic reality and will continue to do so. When it comes to Vietnam (the free trade agreement entered into force on 1 August 2020), we have the biggest Vietnamese diaspora in Europe and the country’s high-ranking officials often graduated from Polish schools. We also can and should have good relations with China and India, ASEAN and Pakistan. Of course, we have to remember about the issue of strategic loyalty when it comes to security policy and some sectors of the economy, but we still need to cooperate and use every opportunity to tighten our economic bonds. Climate change is not the only challenge humanity is facing. For many Asian countries Poland may become a gateway through which they can access EU markets. So I am calling on being reasonably pragmatic, rational and active to strengthen the security of supply of the technology and components that we need. After all, a significant portion of trade, not just with China but other states as well, involves reexported products or supplies for the Polish industry.

How do those relations look today?

They constantly change and every decade brings a structural shift. It is worth to visit Wólka Kosowska, Europe’s biggest trade center to see how the trade structure has changed. Underwear, slippers and cheap quality goods are being replaced with innovative products. At this point it is worth quoting some important data. In 2019 over 30 percent of import from China was constituted by supply import, i.e. products bought for companies that manufactured goods in Poland. The same pertains to Korea, from where the majority of import to Poland goes to Korean factories.

These dependencies between Asia and Europe become apparent when we look at the latest issue the VW factor in Września had to face, when due to logistical and covid-related problems it had run out of microchips from Asia. The factory had to halt production for two weeks. This shows healthy pragmatism is necessary when doing business with Asia. China, apart from importing a lot, is also buying more and more. It is worth remembering about this, especially that despite the big rhetorical rivalry between the USA and China, the trade between them is flourishing. In the first quarter of this year, despite political tensions and trade wars, the Chinese export to the US went up by 68 percent, which is a great result. We can and should benefit from that as well.

Are Korean APRs the future of the Polish nuclear sector?
Energy Nuclear
KHNP, a leader in the global nuclear industry, organized in Warsaw a conference on innovative APR reactors. Representatives of the business and […]
More