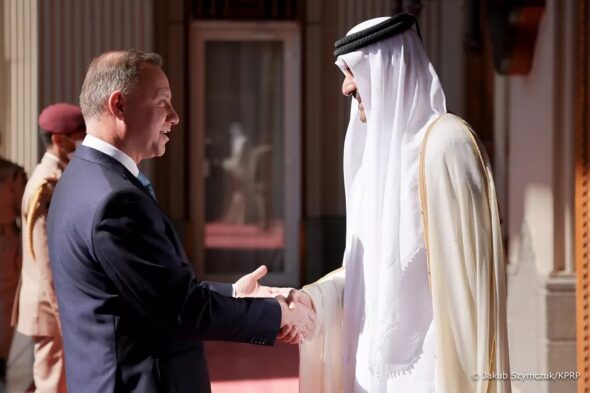 Together with the United States, Qatar is the largest supplier of liquefied natural gas to Europe. This means it plays a crucial role in decreasing the dependence on Russia, a goal shared by Poland and other stakeholders. The threat posed by Russia also makes us look to Ukraine – writes Wojciech Jakóbik, editor-in-chief at BiznesAlert.pl.

Qatar is one of the gas sources Poland has outside Russia

The dependence of the European Union on gas supply from Russia is growing. According to Eurostat, Russians accounted for 43.9 percent of the gas supplied to the continent in 2020 and 46.8 percent in the first half of 2021. In 2011, it was still 30 percent. The dependence will increase if the next gas supply project from Russia, i.e. Nord Stream 2 is launched, which may be used to replace the Ukrainian route, and, e.g. to secure a new invasion on Ukraine. That is why fluctuations in the supply of Russian gas are important for the price of this fuel, and have contributed to the aggravation of the energy crisis. Gazprom was the only company that did not accumulate stocks in European storage under its control in the summer, as we had already written on BiznesAlert.pl.

Imports of natural gas to the European Union in 2020 and the first half of 2021. Picture by Eurostat

Poland maximizes gas supply from outside Russia. It has an LNG terminal in Świnoujście with an annual capacity of 8.3 bcm, and is planning to build a third tank, which will expand the volume to 10 bcm a year. Apart from that, Poland is also building the Baltic Pipe gas pipeline with a capacity of 10 bcm a year, that is to be finished by the end of 2022. It’s also planning an FSRU in the Gulf of Gdańsk with a capacity of 4-8.5 billion cubic meters annually in 2026. PGNiG imports 0.52 million tons of LNG per year (0.7 billion cubic metres after regasification) in 2019-2022 from the American Cheniere Marketing International LLP. This volume will increase to 1.45 million tons of LNG (1.95 billion cubic meters after regasification) annually between 2023 and 2042. As of 2023, PGNiG will import 1.5 million tons from Venture Global Calcasieu Pass and 4 million tons per year from Venture Global Plaquemines, bringing the total to 5.5 million tons, or 7.4 billion cubic metres after regasification annually. Poles will therefore have at their disposal 9.35 billion cubic meters of liquefied gas after regasification from the USA. Only the contract with Cheniere contains a delivery ex ship clause transferring the responsibility for the cargo to the supplier, aimed primarily at the Polish market. The others include a free on board clause allowing the recipient to ship the cargo anywhere in the world, but after taking responsibility for any price fluctuations. These cargoes can go where there is a better price, which is often to Asia, but in the face of the energy crisis and high prices in Europe, also to our continent.

Poles have a 20-year contract with Qatar signed in 2009, for 1 million tons of LNG a year (1.5 bcm after regasification). This agreement was complemented by an additional contract increasing imports to two million tons of LNG per year (2.7 billion cubic meters) after regasification from the beginning of 2018 to June 2034. This may not be the end of Poland’s purchases, or acquisitions with Warsaw as the intermediary. “The more commercial gas from outside Russia will go to Europe, the greater role will be played by the rules of the free market, where there is pure competition,” said Jakub Kumoch, Head of the International Policy Bureau in the President’s Cabinet, during the visit of President Duda to Qatar on December 5.

Why is Poland talking to Qatar?

The talks in Doha were inconclusive, despite the participation of the president of PGNiG. However, one could suspect that the goal of the talks was to increase supply to Poland in 2022, before the Yamal contract with Gazprom expires, and while the LNG terminal still has free capacity while it is waiting for more supply from the US as of 2023. The year 2022 will be marked by the energy crisis and high prices on the gas market, which are now climbing in Europe to over USD 1000 per 1 tcm. Considering this, even the estimated USD 700 per 1 tcm in the contract with Qatar seem attractive today, and encourage to increase import from this source. It is worth noting that the price of gas from Qatar is likely to be even lower, because the pricing formula was changed when PGNiG signed the additional contract.

Poles’ plans for Qatar may also be more long-term. The country has a plan to maximise exports to Europe in order to maintain the leading role of LNG supply. Eurostat data show that Qatar accounted for 4.3 percent of deliveries to the European Union in the first half of 2021, and the US for 6.3 percent. According to BloombergNEF, the Americans may unseat Qatar from its position as the world’s biggest LNG supplier, but not for long, because by 2024 the Qataris plan to invest in gas extraction USD 10 billion in order to obtain profitable gas at a price of USD 20 per barrel of oil, which is 70 percent lower than the current limit of profitability. In addition, BloombergNEF estimates that the cost of gas purchased by American companies on the local market is USD 2.5 per mmBTU, and in the case of Qatar it is only USD 0.3. The Qataris have the lowest cost on the market. This data is important for indexing long-term LNG contracts to the price of oil, giving Qatar more flexibility in its fight for market shares. Contracts signed in China and Pakistan in the summer of 2020 show that the indexation of Qatargas contracts to Brent fell from 15 to 10 percent as was the case of a ten-year contract with Sinopec. One can imagine additional Qatari contracts with Poland at more attractive prices. This also offers an opportunity to balance the dependence on US LNG imports, which constitute the largest part of PGNiG’s portfolio. Greater flexibility of Qatar is also important from the point of view of security of supply in the event of further problems with the timely opening of export terminals in the US. However, it is worth noting that this risk has dropped thanks to the increasing profitability of such ventures.

Poland’s talks with Qatar may also have another dimension – regional. Ukraine announced in September 2021 it wanted to diversify sources of gas supply by importing LNG from Qatar. Talks on this issue are held at regular meetings of the Qatar-Ukraine Economic Commission. Ukrainians do not have their own LNG terminal and there is no prospect of its construction in Yuzhno near Odessa, due to problems of various kinds, the risk of Russian aggression being the leading cause. Poland and Ukraine are already trading gas, and LNG from Świnoujście is already reaching the Dnieper. If the Qataris sign an agreement with the Ukrainians, they will need Polish mediation, and their low cost increases the potential economic attractiveness of such a solution.

Diversification is good for politics and business

The Poland-Qatar talks on LNG supplies are only possible because Warsaw has invested, with the support of the European Commission, in the terminal in Świnoujście, which is a window to the world and gas from outside Russia. The first Qatari contract was the business rationale behind the final investment decision. It makes sense to continue to expand the infrastructure to diversify gas sources to Poland to limit the reliance on Russia, which is especially dangerous considering the possible new invasion on Ukraine. It also makes sense as it improves the economic terms of contracts, including those with Qatar. If there is enough gas, it will also flow to our neighbors, with Ukraine on top of the list.

Polish Briefing: PGNiG-Cheniere agreement. Partnership on the eastern flank for years
GAS LNG
What goes on in Poland on the 9th of November. Related posts: PGNiG signed a 24-year contract with Cheniere for LNG deliveries to Poland Why does […]
More