Polish Briefing: Gazprom challenges PGNiG to a duel over the price of gas in arbitration | Prime ministers of Poland and Latvia to discuss climate policy and energy issues 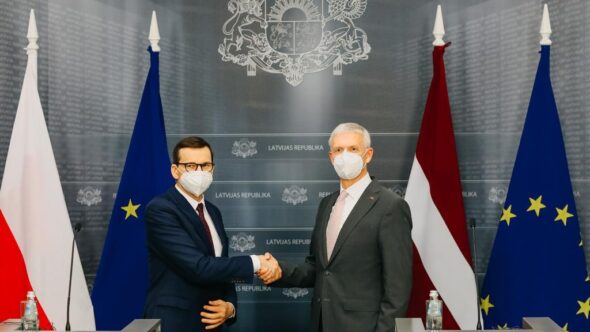 What goes on in Poland on the 17th of January.

On 14 January 2022, Polskie Górnictwo Naftowe i Gazownictwo received a notice of arbitration before the ad hoc Arbitral Tribunal in Stockholm from the counsel of PAO Gazprom and OOO Gazprom Export of arbitration. The notice includes a request for the revision of the contract price for natural gas supplied by Gazprom based on the Yamal Contract. Gazprom expects a retroactive increase of the contract price based on Gazprom’s revision requests of 8 December 2017 and 9 November 2020.

‘The request for the increase of the contract included in Gazprom’s notice is absolutely unfounded. We are well prepared to prove it before the Arbitration Tribunal’, said Paweł Majewski, CEO of PGNiG SA.

PGNiG continues its efforts to revise the price terms for the delivery of natural gas under the Yamal Contract. Notably, that the above-referenced revision requests of Gazprom were submitted in response to the requests of PGNiG demanding a decrease of the contract price of 1 November 2017 and 1 November 2020, provided that, at the time of record high gas prices in Europe, PGNiG’s request of November 2020 was modified on 28 October 2021.

Gazprom’s submission of the notice for arbitration initiates the dispute settlement procedure specified in the Yamal Contract. PGNiG will take relevant action to enforce its rights and to protect the Company’s interests.

PGNiG has twice, in 2011 and 2015, exercised its right to commence arbitration under the Yamal Contract. In consequence of the proceedings initiated in 2015, in March 2020, the Arbitral Tribunal revised the price formula under the contract, granting the request of PGNiG.

On January 19, 2022, Prime Minister Mateusz Morawiecki will meet with Prime Minister of Latvia Arturs Krišjānis Kariņš. – EU topics will include energy and climate policy, reform of fiscal rules and strengthening the resilience of the Community – said the government’s spokesman Piotr Müller.

Prime Ministers Mateusz Morawiecki and Arturs Krišjānis Kariņš will talk about climate policy and energy. They will discuss bilateral and regional issues, including related to infrastructure and electricity cooperation as well as joint activities under the Three Seas Initiative.

In 2022, the 7th Three Seas Summit and Business Forum will be held in Riga. Latvia will be the second Baltic country to host (in 2020 Estonia was the organizer of the 5th Summit of the Three Seas Initiative).

– The Latvian side focuses on economic cooperation around specific transport projects, such as Rail Baltica, Via Baltica, and energy projects – especially from renewable sources. Latvia puts emphasis on digital cooperation (5G) and on seeking private capital to finance them. The Riga summit will be an opportunity to emphasize the European and transatlantic orientation of this form of cooperation, we read in the announcement by the Chancellery of the Prime Minister.