Polish Briefing: Lotos agrees to changes in the Gdańsk Refinery as part of merger with Orlen | A sectoral agreement on developing hydrogen in Poland signed 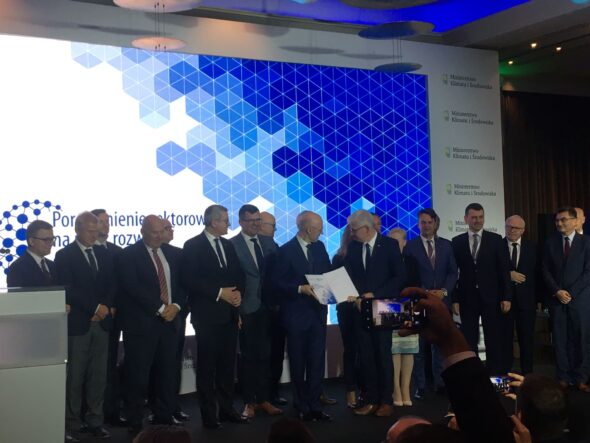 What goes on in Poland on the 15th of October.

During the general meeting of Grupa Lotos, the shareholders agreed to sell the organized part of the enterprise to Lotos Asfalt by contributing transferring assets in the form of a non-cash contribution and taking up new shares in the increased share capital in return.

The holders of 132.7 million of the company’s shares voted for the resolution, 9.7 million were against and 5.99 million abstained. According to the statute, a resolution is valid if it is supported by more than 80% of shareholders present at the General Meeting in the presence of at least half of all the shareholders. During the Thursday meeting shareholders representing 80.3 percent of all votes were present.

“We are waiting for the official report of Grupa Lotos, but it is already known that the resolutions adopted today proves that investors believe in the success of developing a multi-energy concern. This is another important step in the process of merging Orlen with Lotos,” Daniel Obajtek, President of PKN Orlen, tweeted.

“I am personally very satisfied, because the Ministry of Climate and Environment is the host of the second major agreement. It was the second in the world and the first in the EU contract of this kind for offshore wind energy. Today we are meeting to sign another agreement, this time on hydrogen. This field will require close cooperation from us for many years. We must build a community based on a common goal and trust. We will not be able to break through the glass ceiling of our competitors if we do not generate that trust. Such an agreement gives hope that we will be able to mobilize ourselves to pursue the goal. This is a huge challenge. We have to learn to be wrong, we have to be able to fail. If we want to be an economy that will pave new paths, we must understand that not every path, not every project will be brought to commercial implementation. However, they too are needed for the good of the entire industry. We want the hydrogen industry to be our showcase in the world,” said Michał Kurtyka, Minister of Climate and Environment, during a press conference.